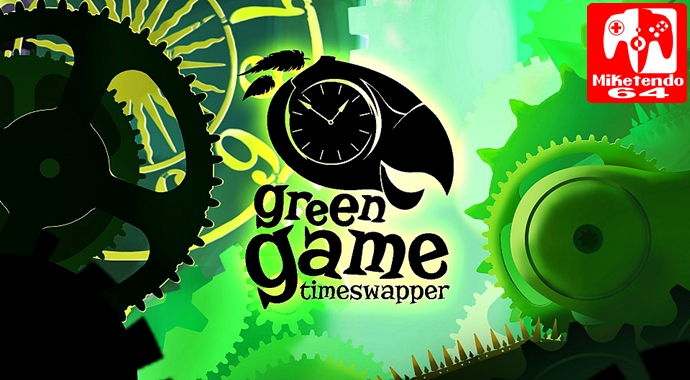 For the players looking for a very cheap game on the Nintendo Switch that can only be experienced in Handheld and Tabletop mode, one such offering has arrived.

Developed and published by iFun4all and originally released on Steam and mobile devices, Green Game: TimeSwapper is the sequel to Red Game Without a Great Name, which is also planned for release on Switch, but is Green Game worth getting? After all, just because something is nice and affordable, it doesn’t mean it is worth buying as donuts are cheap, but if you’re on a diet, they’re probably one of the worst things you could possibly  eat,

So first up, let’s talk value for money. For the low price of $2.99, you get a game that comes with 50 levels (10 levels less than Red Game as that one has 60,) 150 collectable gears with 3 per level, a self-described soul/jazz soundtrack that is actually pretty good and a lot of green. I mean, I know the game is called Green Game, but this really is a case of green by name, green by nature kind of deal as there is so much green in Green Game, it’s almost like Hulk, She-Hulk and Bulb Boy all got together one day and had a green party!

Now, although it may sound like I’m against the game’s colour scheme and particular art style, I’m really not. The colours and style works great in this steampunk world-like fantasy are great and are two of the things the game does great as they are definitely highlights, but the rest of the game, not so much. I’m not against games that can solely be played with touch controls, as I’m no stranger to investing a couple hours into Fire Emblem Heroes, Super Mario Run, Miitomo and even Swordigo each week, but if I am to play a game that solely makes use of touch controls and has a much bigger screen, like the one the Switch has, I either want to be made to put a little work into my finger play, or have the option to play with a remote but the latter is not an option.

Thus, because fingers are the only thing used to play, with a double tap required to interact with levels and options in the game’s menu and swiping horizontally when actually playing, there is very little to actually do, until you get to the later levels that require more work, but is just more of the same of what you’ve had to do up until then, so while the game starts off decent, it doesn’t remain that way, as Green Game: TimeSwapper does fail to properly distinguish itself from other games in the same genre?

But what of the story? Well, being the direct sequel that it is, Green Game sees the return of the Mechanical Bird introduced in the first game, which was used to deliver letters, only after learning all it needed to from the red world and Red Game that gave it its purpose, it’s time to go even further down the rabbit hole. So in a new hostile world to explore, the maniacal Chief Scientist of the Green domain, intercepts the bird, takes away the teleporting ability it had in the Red Game, just to modify it, so the bird can have a new time swapping ability instead, which is to see it through the next series of torment, horrors and harrowing levels.

Okay, the levels aren’t actually that bad, as the puzzles can be troublesome at times, but the more you play, the more you get the hang of Green Game: TimeSwapper, as the most infuriating thing is the game’s learning curve and now let’s actually talk gameplay. Green Game: TimeSwapper is a 2D arcade puzzle all about time as you can manipulate time to set it to the past, the present and even the future and all of that is done just by swiping horizontally from one side of the screen to the other, only there is a little more to it than just that. You see, while swiping is all well and good, but sometimes when you swipe, movable objects will change their direction, so while one would blow you in one direction, just by swiping, it can send you into another and it makes all the difference. One minute you can be flying towards some lovely looking windmills with blades that will rip you apart, or into pistons that will crush you, spiked traps to impale yourself into, or the mundane wall that befalls everyone sooner or later. If you do dodge all of that though, if you don’t time your time swap just right, you might just kill yourself due to making a certain walls reappear

The good news though, is that death is not the end, as you possessed infinite lives, but there is a Death Counter that will keep track of the number of times you have died and while the first 10 levels should pose no threat at all, there ones that follow will, although you can spare yourself tons of unnecessary deaths if you choose to avoid collecting each gear every level has to offer and instead opt to take the safest route to the cage awaiting you at the other end of the level.

By no means is Green Game: TimeSwapper a ground-breaking game as it doesn’t actually offer it’s genre anything new, and it can be more boring than it is fun at times, but the music is decent, the art is appealing and it is something of a time killer, but it is not a game that has aged well and not is it a game that makes the most of the Nintendo Switch.