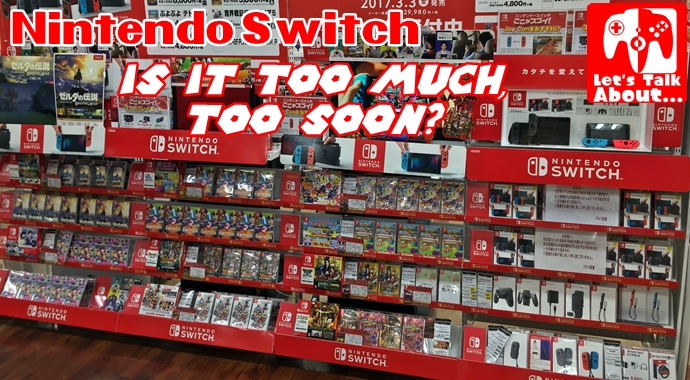 Let’s Talk About… The Nintendo Switch (and the Curious Case of Too Much, Too Soon!)

But what is Let’s Talk About? Well it’s our feature series that continues to evolve and as part of its evolution, we’ve taken it public, so that instead of just me or Mike Scorpio and I doing all the work, discussing all things Nintendo related, now you too can join in and have your say. So in light of that and eager to strike up yet another instalment, last month we took to Twitter to talk about the Nintendo Switch’s (at the time) current line-up of games and asked the question, “Is it all too much, too soon?” And today, we’re sharing your answers:

Okay people, open discussion, let's do this! Is the #NintendoSwitch's Games Line-up too much too soon? It's not just #Nindies that are drowning amongst all the competition. pic.twitter.com/fgoDCuRaWs

@miketendo64 (in continuation to the original tweet): “With #Splatoon2 releasing less than a month later, #ARMS wasn’t as popular as it could have been, especially since #12Switch has been revealed to be out performing it.”

@SwitchIndie (in response to @miketendo64): “You also have to put it that 1-2 Switch was a launch day title and has been out longer. ARMS will definitely outsell it in the end.”

@miketendo64 (in response to @SwitchIndie): “In the end yes but a lot of people actually stated they might get Arms later on because they’d rather have Splatoon 2 as they know they’ll like it.”

@SwitchIndie (in response to @miketendo64): “Later down the line I could definitely see it become one of the first Nintendo selects titles for $20.”

@austinclan9999: (in response to @miketendo64): “I think the issue with ARMS is the lack of updates, and they need ARMfests! This would really bring people to the game I think.”

@julesthejoint: “IDK I feel that ARMS was always destined to fail. Don’t get me wrong it’s a fun idea, but it should never have been a full game. It did introduce great things though like mini games while waiting for a match. ARMS itself should’ve been a mini game in another IP.”

@TheLaw343: (in response to @julesthejoint): “There is nothing that makes arms more fit to be a mini game than Splatoon or Mario.”

@Drac_Mazoku: “While the Switch was a gold mine at first for a small developer, starting this October, a lot of small titles will just fly under the radar.”

@df2506: “I think it’s great that there are so many different games. Hard for a reviewer to keep up, for sure, but it’s great for the system.”

@miketendo64 (in response to @df2506): “I agree with that but it’s even harder for consumers. We’re lucky as we can get a lot of games for free but those who have to pay, now need to take a mortgage out on their house just to keep up.”

@df2506 (in response to @miketendo64): “Well, the way I look at is that not all of the games will appeal to everyone. Having a lot of games just gives people choices.”

@RiversDeven: “Absolutely not, there’s something for everyone already on the Switch. I’m sure Nintendo has planned for this so they won’t have any droughts.”

@HectorC777 (in response to @RiversDeven): “My sentiments as well it’s good to have something for everyone.”

@MarcosCodas: (in response to @RiversDeven & @HectorC777) “Agreed. Though if I’m honest, I’ve stopped playing anything else since I started The Flame in the Flood.”

@julesthejoint: “I love that there is so many games to choose from. There’s something for everyone.”

@SoDinoSore: (in response to @julesthejoint) “It’s the only reason the Switch is selling so well. If there was a low or even average stream of games, the Switch would be meh.”

@MarcosCodas: (in response to @SoDinoSore & @julesthejoint) “The only thing missing for me on the Switch is the ability to port Web Apps into native ones like the Wii U had. HTML5 game dev!”

@df2506: “People complain if there’s not enough, or there’ss too much or if they don’t get the game they want right away. lol.”

@austinclan9999: “No, I think the releases are about right. So far most titles have fared well. There will always be exceptions sadly.”

@ezenteno: “I think its fine, Nintendo just needs to have a better layout of the eShop.”

@Jome20: “I bought Fire Emblem Warriors because I loved Hyrule Warriors. But haven’t even opened it yet and now it’s all Mario.”

So, long story short, according to you guys, the line-up, while it is a bit full-on, especially on our wallets this moment, it’s not too much at all, but just right and who am I to say otherwise? It is in my opinion as there are just way too many games to keep up with, that it is so  easy for other games to end up forgotten, the Switch is a success and games are selling spectacular, so whatever Nintendo is doing, they’re clearly doing it right and let’s leave it at that.

This has been another of our revised instalments of Let’s Talk About. Thank you reading, thank you for supporting the series and if you wish to join in with the conversation, you can do so below by leaving a comment.