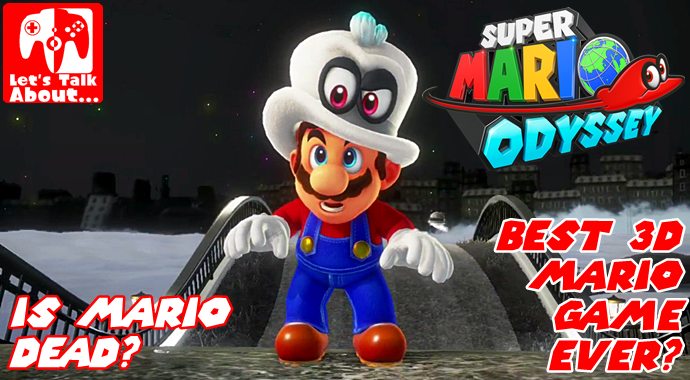 But what is Let’s Talk About? Well it’s our feature series that continues to evolve and as part of its evolution, we’ve taken it public, so that instead of just me or Mike Scorpio and I doing all the work, discussing all things Nintendo related, now you too can join in and have your say. So in light of that and eager to strike up yet another instalment, as a follow-on to the release of Super Mario Odyssey and the end of our #MarioWeek, last month we took to Twitter to talk about Super Mario Odyssey and today, we’re sharing just how exactly that chat went down:

Let's Talk About #SuperMarioOdyssey! Is it Mario's greatest adventure yet, or is it the story of his death? Cap Kingdom is purgatory, easter eggs is Mario's life flashing before his eyes and Cappy is the ghost to see him through it? #MarioIsDeadTheory pic.twitter.com/blH18aMOWA

@miketendo64 (in continuation to the original tweet): “We’ve had the “Is Link Dead in Majora’s Mask?” Theory for years, so it’s about time Mario gets the same.”

@df2506: “Super Mario Odyssey is definitely Mario’s greatest adventure yet. The game is so amazing. I can’t stop playing it. Love it.”

@miketendo64 (in response to @df2506): “But is he alive, or is he dead? Where do you stand? Either way, the game holds up and changes nothing but the perspective.”

@Pokemigas: “Did MatPat from Game Theory take over this account?”

@miketendo64 (in response to @Pokemigas): “No, but SMO keeps getting compared to BotW, so I figured why not bring back the Link is Dead theory, but with an Odyssey twist since it actually ties in!”

@Pokemigas (in response to @miketendo64): “Oh, I see. Great work on adapting theory though.”

@Marcus_Sellars (in response to @NinImpactGaming): “Well….I have never played any of the Galaxy games.”

@SwitchWatchTV (in response to @Marcus_Sellars): “We put our review out and out of all the Mario games I think it’s one of his best. Nostalgia is like love, sometimes it’s blinding.”

@DaneWilkinson85 (in response to @Marcus_Sellars): “Very good point, something I agree with strongly. I think Mario Galaxy is the ‘best’ game I’ve ever played, but not necessarily my fav.”

@SwitchWatchTV (in response to @DaneWilkinson85): “I find it myself all the time even with movies. I went back and watched IT the original and was nowhere near as good as I remember!”

@SoDinoSore: “It is his greatest. The theory is plausible to me except the fact that these Kingdoms Mario probably didn’t even know existed. And Mario isn’t getting it on with Pauline anymore, so it wouldn’t explain why she is prominent in the game.

@Lahmubin3DS: “At first when I saw Cap kingdom in the trailer, I thought so too. Mario is probably in the afterlife. It fits with black and white bg.”

@julesthejoint: “Awee. I hope he’s not dead, but the story twist is really cool!”

So, to sum it all up, according to you guys, Mario is not dead and reliving certain moments of his past/experiencing what is his take on the afterlife, but is alive, fully functioning and Super Mario Odyssey is certainly one of his better adventures to date. I can live with that, Super Mario Odyssey is a rather special creation, but definitely not the best in my book as I still love the Galaxy games, but that’s just me!

This has been another of our revised instalments of Let’s Talk About. Thank you reading, thank you for supporting the series and if you wish to join in with the conversation, you can do so below by leaving a comment.