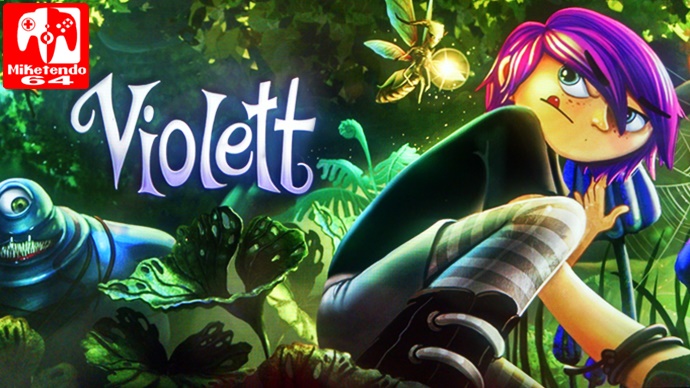 Imagine being whisked away to a whimsical land full of weird and peculiar creatures and you have to find pieces of an amulet that have been scattered across the land as it is your only means of getting back home.

Violett is a point and click adventure that takes the foundation of Alice in Wonderland and throws in elements of its own identity. Originally released on Steam back in December 2013, Violett Remastered has been given a graphic overhaul and brought to the Nintendo Switch. It was developed by Forever Entertainment, a Polish game development company that has been creating games since 2010 for multiple platforms including Android, iOS, PS Vita and of course, Nintendo.

Violett is the story about a Rebellious Teenage Girl who is taken out of school and away from her friends by her parents as they move into a house in the deep woods. With her parents fighting below, Violett goes upstairs to her room and sulks oabout her present situation. She soon spies a hole in the wall where an ominous glow is emanating from. Violett reaches into the hole and pulls out a strange amulet. The amulet than transports her to a strange well full of strange and peculiar creatures. Violett then finds herself trapped in a cage and after connecting with the fairy in the cage next to her, she develops telekinetic powers that allow her to escape. Violett then has to find the amulet that transported her to this weird world in the hopes it will take her back home.

Violett is a 2.5D puzzle adventure that has been given a graphical facelift to fit in with the current generation of videogames. the world and everything in it is very colourful and whimsical with real world items alongside fantastical creations like a kitchen sink with a beavershark-like creature swimming around it. There is little to no narrative and ¡the story is told like a picture book. This seems to be the general theme of the game has you have to use your own imagination to put all the pieces together. Each location you travel to has a series of puzzles that you have to figure out in order to uncover the path to find fragments of the amulet.

You are not given any instruction as to what the puzzles are or how to do them except by a series of “Tips” that you find using the icon in the lower right of the screen. You can’t see all the tips straight away either, as there is a timer as to when they will become available. They also only give you a slight idea with a series of images of what you have to do and can still leave you wondering what you are supposed to do.

There are two methods of gameplay, controls and touchscreen. Being a point & click game, touch screen seems to be a good option to go for when in handheld mode, yet the controls will be your only go to when playing in TV mode. Character movement is controlled with the left joystick and the cursor can be moved with the right joystick. The cursor will change form depending on where it is on the screen, be it footsteps, a hand or an exit door to name a few. Unfortunately when playing in handheld mode, it is not easily changeable between touchscreen and there can be a slight lag in between and sometimes doing actions you didn’t necessarilly wanted to do.

Inspired by the likes of Alice In Wonderland and maybe a bit of The Wizard of Oz as well, Violett had to potential to be great but it just falls short of the mark. Some of her powers go underused until the very end of the game and the storyline is let down by the fact there is no real narrative to help fill you in on what is happening or why. That of course can also be it’s intention as it puts you in the same position of Violett as she also knows nothing in what is going on around her. The Music track does deserve credit as it helps give the game just the right mood depending on the setting and location that you are in. It can be light yet melancholy or dark and disturbing and does it’s job to make you feel a part of the game and feel how Violett is feeling.

The game does have a penchance to stop completely whilst saving and this can happen when you reach a certain point in the game or completed a certain action and can be quite annoying when you are fiddling with things in the puzzle and not quite sure what it us you are doing and all of a sudden, it’s saving again and the game has stopped. Gameplay does continue afterwards but it can be a slight inconvenience that interrupts the flow of the game.

Another case of a Steam Game making the leap to console and while The Nintendo Switch is definitely a great way for gamers to enjoy all types of games, both corporate and indie, anywhere, anytime without the need of a laptop or home console. Unfortunately, Violett just misses the mark of being a really really good indie game due to it being one that really makes you use the old grey matter and that it might be too difficult for younger audiences. I am no Albert Einstein but I am not a plain-brain numpty either (okay well maybe a little) but if you like games that will make you think and only gives you a few cryptic clues on how to do it, then this may be a game for you