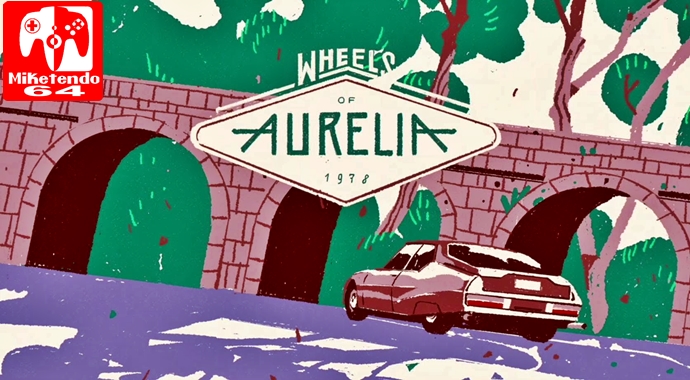 Visual Novels like the Ace Attorney Series, the Zero Escape Series, The Layton trilogies normally achieve a huge amount of success, especially the Telltale games. As a fan of this kind of game genre and having finished a whole bunch of them, let’s just say that as soon as I first learned of Wheels of Aurelia coming to Switch, it was immediately a game I had to play!

In terms of what it is, Wheels of Aurelia is classed as being an interactive visual novel and a driving game set in 1978, in which you play as Lella as she travels through “Via Aurelia”, one of the many roads the leave Rome, Italy. The game released on Steam and PS4 last year, arrived on Android and iOS in October and is now available Switch!

The game’s setting, for me, is both a curious and dangerous one all at the same time. Not many games set their story in the 1970’s, with even less set in Italy, so joining this two provides a unique and unexplored setting for a game. While this could have been a good golden nugget, this setting is not explained well. Given my schooling in Brazil, I’ve not had many lessons on Italy’s history, so I went into Wheels of Aurelia blind, hoping the game would set me in what was happening in the country and the culture of 1970’s Italy, but it didn’t. At the same time though, the game doesn’t set you up on what happened to Lella in the past and why she is on her journey to France in the first place.

Because of this, I didn’t much care for the characters or the serious topics that they talked about like the kidnapping of Aldo Moro. Also, some conversations, which are purposefully meant to make you learn more about these characters, aren’t exactly what they could have been as instead of being something substantial, they were more trivial like Lella’s star sign. From the start to the finish, Wheels of Aurelia will take you from 15 to 30 minutes and when you do beat the game, your choices will result in one of the possible 16 endings. In other words, the game is short but is made in such a way that the player is compelled to play over and over again, especially since the act of such will allow you to get unlock all Scenic, 1978 modes and map.

The choices in which ultimately determine the ending, are handled poorly, as there are 3 options, normally “…” and two other possible answers, that you have a few seconds to decide with the response to the chosen answer, always being the same. In some occasions though, after choosing an answer, the topic completely changes, leaving that last topic unfinished. And, in my many playthroughs, a few of the topics, such as Lella’s star sign, kept repeating and with 2 options only, I ended up reading almost the same conversation more than just a couple of times. Another key part of the gameplay is the driving aspect. The car will move automatically following the road and in this format, it will stop at the few locations along the road to pick up hitchhikers or visit places. If you want the car to go faster or you don’t want to it stop, you press B (or A or the shoulder buttons), but, as soon as you do this, the car stops following the road automatically and it is up to you to control it, moving the left stick left or right.

At first, I had problems driving and not hitting anything, but after a while, I got better. Not that it stopped me from hitting walls as, occasionally, the road limits aren’t what they seem. And, even following the road automatically will not prevent from hitting. Then when it hits something, the car may act as if it was a ball in a pinball machine. To control the game, you use the aforementioned to control the car and move the right stick up and down or press the up/down directional buttons or Y or X to cycle through the dialogue options. Most of the times, the controls proved to be acceptable if you look at them separately.

At one stage of the game, you are tasked with winning an illegal race, so it is necessary to keep the acceleration buttons pressed if you intend to win, while you continue choosing dialogue. This scene is where I had problems I had with the controls and gameplay. You have to fully control the car to win and also read the options in a limited time or an option will be selected for you, which led me to crashing into another vehicle, or having to give up on the dialogue altogether. What’s worse, is since all the buttons are active, twice, I selected what I was going to say with Y and moved my finger totally to B and in the process, I slightly touched the right stick, and changed what I was going to say. Even with all of this, this game still has some interesting things worth discussing. For starters, the visuals of Wheels of Aurelia are a mixture of the 3D overworld and the 2D sprites on the HUD. They blend relatively well and are easily understandable and the graphical style gets an interesting change when we activate the Black and White or/and 1978 modes. Even the scenic mode provides a different look through the scenery, an interesting addition.

It is also visible that, even though they don’t explain the setting properly, the team did an excellent research to get the details right of what really happened, (for the purposes of this review, I did a lot of Google searching). The music in this game was composed for it and I have to say that it is probably what I liked the most. They present a style that fits the idea that they are music playing on the radio of the car and didn’t bother me. I have to give praise to the main theme and the title cut-scene that made me few like it was an episode of a TV Series.

If it had a proper introduction to the era, some changes on the controls and AI, meaningful and plot twisting choices and a lower price, would have the potential to be a good experience. However, I can’t recommend the game in the shape that it is, unless you have some previous knowledge of Italy’s history in the 70’s. If you have and/or is interested in this game, then I cautiously warn you about this problems and suggest you pick the android and iOS version that it will fit better and is cheaper. So I leave you with this information: As I was writing the review, I finished the game without touching my switch.