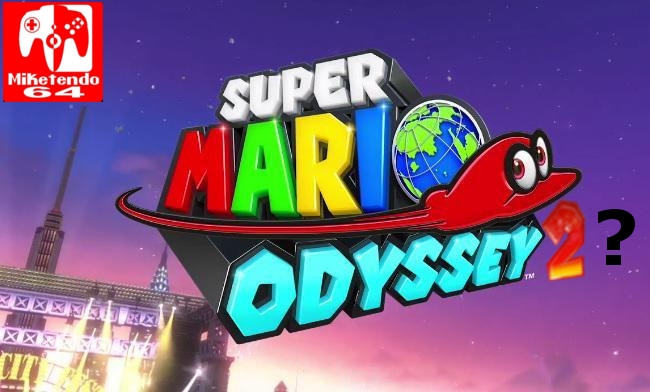 Super Mario Odyssey is out… What’s Next?

Hey guys, whether you are already playing Super Mario Odyssey, waiting for your physical copy to arrive (like me) or waiting to go to the nearest store to buy it, if what we have learned various media outlets is to be believed, we are all bound to enjoy it!

But then, I start thinking about 10 months ago. We didn’t have the slightest idea of what we would see in this new game, apart from the few images from the Switch reveal trailer. Then, on January 12th, we saw that first trailer that showed a lot of things that we weren’t expecting such as Mario walking with humans in New Donk City. Then at E3, we saw Mario capturing enemies and now completely not mentioning Mario + Rabbids: Kingdom Battle, I can’t help but think what is next for Nintendo and Mario?

I know, that topic is superficial and it is very unlikely that I will ever guess what is next. But that’s the fun of it. Not only for me, but for everyone who reads this article as well. In the comments section, I want you to write a fun or crazy guess of what can happen next in a Mario game for Switch, smartphone devices or even another Nintendo platform, like the 3DS or its successor.

One of the main games asked for when the first Wii U port was announced, was Super Mario Maker. So, a lot of people hope that Nintendo will port the game to Nintendo Switch. But I think that a sequel would be more likely than a direct port, especially since they already ported it to the 3DS. They could then use this opportunity to add more items and options that weren’t available in the original game, add more graphical styles and even implement the HD Rumble in an interesting way to allow the creator to give the idea of suspense, surprise and more!

Another possibility is that they have is to continue to expand the New Super Mario Bros. series, especially if you consider that the last title was New Super Mario/Luigi Bros U that was launched in 2012/2013. The probability that this will be Nintendo’s next Mario game is high. I really like those kind of games, especially New Super Mario Bros 1 and 2. But my main problem with it is that the new power-ups and mechanics introduced in each game are not as good as they can be. I think that the next game must come with something that takes advantage of the Switch’s features in a gameplay perspective, and not just add HD rumble to the game and a singular new power up.

My next probability lies around the idea of a Sequel to either the 3D series or the Galaxy series. Both sound like good games and a lot of people would think that a Galaxy game would be perfect. If it is either of them, I am happy and I would love it, but I think that Nintendo needs to apply some of the development aspects of Odyssey into the new game, to make a worthy sequel to these games.

A sequel to Odyssey or the sandbox Mario games like Sunshine, is not something I can see happening anytime soon. Much like I can’t see Odyssey getting added content in the form as an expansion, because unlike Breath of the Wild, which is a game you can add to, including a new/more story, Mario games often possess a self-contained story and a self-contained world that doesn’t need more added to it because they are more than enough exactly as they are.

But what about you? What do you think? What is your wild guess about what the next Mario game to come to the Nintendo Switch will be like? Let your creativity out and write what you think in the comments.