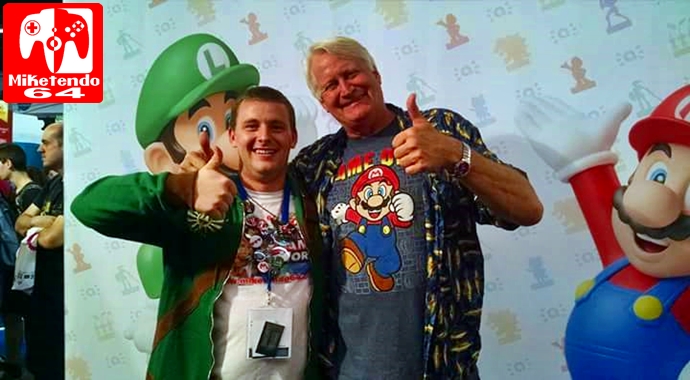 Hey guys, welcome back to yet another Editorial penned by me, “Miketendo64’s Maniacal Overlord” Jack Longman, aka Jacktendo92 and today I feel like talking about myself for once!

As part of our #MarioWeek activities, something we’re doing is a series of interviews entitled Mario & Me. Maybe you’ve seen some of them already, they’re pretty good, especially the ones where game developers answer the same questions some of our staff has. Only because I’m the one asking the questions, I thought it would be vain of me to also answer them, but every time I read the responses to my “What is a Mario moment you will always treasure?” question, I can’t help but think of an answer of my own.

So because a certain thing keeps coming to mind, I feel compelled to answer the question myself, so for me, the Mario moment I will always treasure has to be the day our very own Mike Scorpio met Charles Martinet, aka the voice of Mario. It was last October and Miketendo64 had been approved to attend Barcelona Games World 2016 in Spain, as press. Not only would BGW be our first event attended as media, but also our first attendance to a video gaming event ever, so to say we were excited, would be an understatement.

We were over the moon and smiling like demons the entire train ride up to Barcelona and couldn’t wait to get to our hotel, so we could grab an early night’s sleep and get to BGW bright and early. Now our first day at BGW is unimportant, as we have covered the day in detail last year, so let’s skip to day 2. BGW was open to the public and Mike Scorpio, my sister Ashleigh, the artist behind The Miketendo Strip and myself were milling about the Nintendo section. Mike and Ash were getting footage of everything and I was doing my usual thing of slipping out of sight, going off on my own and seeking out something interesting and by God, I found something that fit the bill!

Out of the corner of my eye, I spied a giant of a man conducting interviews with members of various media outlets and taking pictures with his fans and that man was Charles Martinet. I immediately hurried away through a throng of people to track down my team and dragged them back to where Charles was hanging out, without a single word as to explain why! Oh, and when I say dragged, we are talking me having grabbed Mike and Ash by their wrist and pulling them over. Mike wasn’t particularly happy about it, but then he saw the voice of Mario and his jaw dropped. Amazement washed over his face and immediately he started taking pictures on his phone, whilst urging Ash to film.

Me on the other hand, my mind was of a single thought, “we need to arrange an interview!” To my right was an employee of Nintendo Spain and for the first time in my life in a very important situation, I lifted my press pass up and in the best Spanish I could muster, I asked who it is I would need to talk to, to arrange an interview. I never got the guy’s name, but he lifted a finger and pointed at a woman and said: “You’ll need to talk to Christina.” I thanked him and made a beeline for Christina. I showed her my pass and after a very brief, yet positive exchange of words, Miketendo64 was approved to have an interview with Charles Martinet, in 1 hour and 30 minutes time.

Looking away from Christina, I glanced over at Mr. Martinet, and taking a picture with him was Mike. His smile was massive and for a brief moment, all the news and commotion around me went silent. Mike has always been such a huge Mario fan and a fan of Charles Martinet, and in that moment he was truly overjoyed. He was on top of the world and when his time ended, I pulled him aside and said “so taking a picture with Mario huh? Feels great yeah? I bet I can beat that.” “How’s that?” he replied. I flashed a sly smile and told him I had arranged an interview. His eyes bulged so much, I actually thought they might pop out of his skull.

We passed the time by playing some games, which included The Legend of Zelda: TriForce Heroes, the first Zelda game any of us were actually able to play together at the same time but come time to conduct our interview, we met up with Charles and Christina and headed over to a nice little R&R spot for press and the interview got underway. I will not bore you with the details of the interview, as we actually have a video of it in action, which I will be sharing in this editorial, but Mike was alive, beaming and long after our time with Charles ended, after talking about everything we could possibly think of at that moment in time, Mike was in a consistently good mood. Any concerns he had about the money we had to spend to make our BGW visit possible were a thing in the past, because the only thing that mattered was Mike’s dream had become a reality and he wouldn’t stop thanking Ash and me in the role we played in getting the interview, going to Barcelona with him and for getting our site press clearance in the first place.

And for anyone wondering, yes, we did geek out a lot and had certain items signed, like Mike getting his Miketendo64 at Barcelona t-shirt signed and me having Martinet sign my press pass since it was the key that unlocked the door to him. I mean, how could I not have him sign it? But yes, for me, that day will always be my best Mario moment, even if it’s not a moment more about me, it was the day I was able to make someone else’s dream happen and there really is no way at all that could possibly describe just how great that feeling feels!

To anyone who stuck around to read my story, I thank you from the bottom of my heart. I actually despise doing personal stuff like this, but its #MarioWeek and it needed to be done, so thank you for reading and for sticking with us for as long as you have. It is all of YOU, who makes all of THIS, a lot easier!