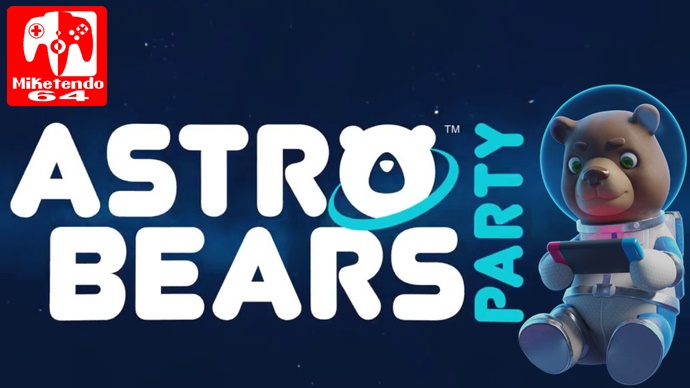 Ever wondered what it would be like to play the mobile game Snake but instead of Snakes, you are a spacesuit wearing bear traversing over a small globe with a colourful ribbon trailing behind them.?

Well, Astro Bears Party by Qubic Games does exactly that and allows up to 4 players to join in on the fun on a single Switch console. The idea of the game is to try and trap your follow players by making them run into your ribbon. Of course, you have to be careful not to run into your own ribbon otherwise it is gameover for you as well.

Astro Bears Party offers two game modes, Party Mode and Single Player. Party Mode allows 4 players, each with their own joy-con, to go against each other like I mentioned before, to trap the other bears and knock them out with the ribbons trailing behind the bears. You can choose between 3 sizes of globes to play on and how many points you want to play for.

The winner is the last bear standing when all others have been knocked out. There are four different bears to choose from, each with their own different characteristics like running faster or longer jetpack capacity. Yes, that’s right. The bears even have jetpacks to help them jump over the ribbons but be careful about staying airborne for too long as the jetpacks can take time to regenerate and may leave you short when you really need it.

Single player mode has you running along the globe trying to catch jetfish which gives you points to add to your high score. The rules are still the same though, don’t touch the ribbon otherwise you lose. The slight difference in this mode is that you have to actually catch the fish as opposed to trapping them with the Ribbon. you have to plan your movements well to avoid accidently trapping yourself and believe me, it is easily done. Settings allows you to turn Sound, Music and Rumble on and off and Help gives you descriptive diagrams on how to play Astro Bears Party. Other than that, there is not much else to be offered so replayability really depends on how often you can get your friends round to play a few games.

Astro Bears Party is surprisingly addictive but single player won’t keep you as entertained as the party mode with friends will. The sound effects are fun and the music is entertaining but you couldn’t make a whole party session out of it but it is definitely worth including in a roster of party games when playing Switch with friends. I give Astro Bears Party a 7/10 as it is not a bad game to pick up for $4.99 but it is really lacking in content which is a shame because with a game with the word “Party” in the title, you would think there would be a few more modes or variety available