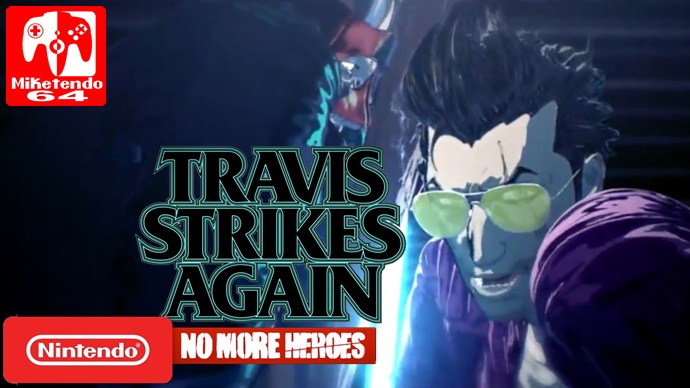 September 1, 2017 7:37 am Published by Mike Scorpio Leave your thoughts

If you are looking forward to the third installment of No More Heroes, you will be delighted to know that Grasshopper Manufacture have begun sending out the official Press Release for the game Travis Strikes Again. The Press Release unveils that Travis Strikes Again will be coming to the Nintendo Switch in 2018 and the plot for the game has Travis Touchdown & Badman brawling in a trailer when all of a sudden, both of them are sucked into a Phantom Games Console, the Death Drive MK II. Travis will then have to fight his way through and complete 6 different videogames in order to escape and have his wish fulfilled. You can see the official press release for the game below along with even more artwork for the game.

Tokyo, Japan, September 1st, 2017, Grasshopper Manufacture, an award-winning Japanese developer of videogames is delighted to announce the return of Travis Touchdown in Travis Strikes Again: No More Heroes, due for release for Nintendo Switch in 2018.

Travis Strikes Again: No More Heroes is a raucous 3D action title, where Travis touchdown wields the Beam Katana to massacre his way through countless enemies, taking on ferocious bosses in an epic battle with Badman. This marks the first time in ten years that SUDA51 has taken on the mantle of director.

“We’ve received a tremendous amount of support from our fans over the years, and we are delighted to finally share Travis Touchdown’s next great adventure with fans of Nintendo Switch,” said Goichi “SUDA51” Suda, founder of Grasshopper Manufacture. “We’re ecstatic to be expanding the No More Heroes universe in 2018, and we can’t wait to share more information with you in the coming months.”

Set in the remote countryside of the southern US, one year has passed since the events of No More Heroes.  Badman has come to exact his revenge on Travis for the murder of his daughter, Badgirl. As the two foes are battling it out, they’re sucked inside the phantom game console ‘Death Drive MK-II’, a machine developed by Doctor Juvenile. It is said that whomever collects and beats all six of its games will have their wishes granted.