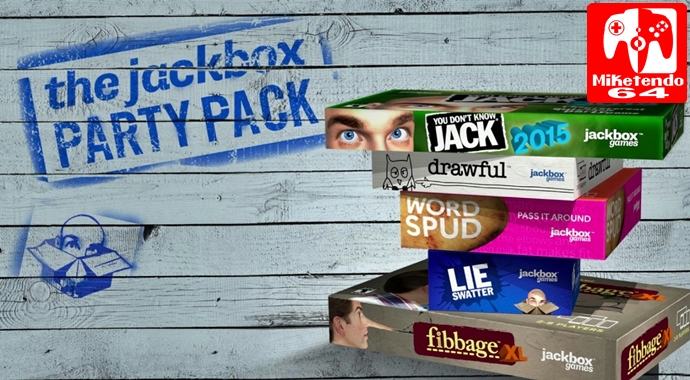 Just like The Jackbox Party Pack 3, The Jackbox Party Pack is a party game collection made up of 5 different games, which all unique in their own way but some are better than most, so in an attempt to narrate and sell each one to you, here’s me providing a brief breakdown on each one, what they entail and their in-game description:

The smart-ass trivial show that started it all!

If there was ever a game that could make you feel smart and dumb at the same time, it’s you Don’t Know Jack 2015. There’s 50 “episodes,” each with their own questions, 3 rounds and multiple questions. There’s also a whole Kangaroo, Peanut, Albert Einstein and Uranus segment that always results in guffaws. But hey, at least when answering questions, you do have four options to choose from and if you feel like screwing over another player, you absolutely can and not only do you get money if they’re wrong, but you also get to see their represented player number get stabbed repeatedly by a screw!

Fool your friends with your lies, avoid theirs, and find the (usually outrageous) truth. “The mayor of Rabbit Hash, Kentucky is a ___.” Go!

Consider yourself to be a masterful liar? A true master of deception? Then Fibbage XL is the game for you. You can lie your way to the top and win big, or fool for the lies of others and lose terribly! Whatever you do though, with outrageous questions being asked, with a ludicrous truthful answer needing to be picked, two things are guaranteed, you will laugh your arse off and you will pick up some embarrassing general knowledge you will hope to never need to use in a pub quiz!

Do lobsters pee out of their heads? Did Japan vote the instant noodle the top invention of the 20th century? Or are you calling BS?

We all like to think we can separate the truth from the lies, but can we do it when we have to decide if a lavish lie is in fact a lie or outlandish truth? This is what awaits every player who tires their hand at Lie Swatter and while things are easy in the beginning, it’s not that long before the heat is turned up and players will find themselves drowning in deception and mistruths!

Keep the words rolling all night! Just finish the word coming toward you, like “Mail____.” Mail enhancement, you say? You nailed it.

In what I feel is essentially the worst game in the entire collection, Word Spud is one of those “keep the conversation going” like games that sees one player having to come up with a word that fits in with the one previously given by another player, whilst everyone else votes on whether or not they liked the response, which ends with the player getting the most like points winning. Now for the purpose of this review, I played this game a couple of times and while some were pleasant, some playthoughs of this game felt like the game ran a lot longer than it should have done. (I and those who played it with me, got bored of it pretty quickly.)

The drawing game that talks all other drawing games and draws little mustaches on them. Can’t draw? No problem! It’s funner that way!

For the players who like Pictionary, who want to do something other than guess the correct answer and tap buttons, with Drawful, you get to draw a picture that represents your character and pictures of whatever prompt you’re given and do the occasional bit of typing as you write in what you feel the picture of a fang possessing football could represent. (Don’t overthink it, its vampire football.) What’s more, even if you can’t draw worth a damn, with Drawful it really doesn’t matter, especially since that doodle of yours could turn out to be the god awful picture that wins the game for you and as a non-artist, I totally dig this game!

While not every game is a winner as I found Word Spud to be the lease appealing one, each game has an interesting choice of graphics and works not just on a creative level, but a humours one as well, as hilarity isn’t just loosely promised, but absolutely guaranteed. However as great as some of the games are in this pack, without a doubt You Don’t Know Jack 2015 is easily the best one! (Although I could be a little biased here, as my name is Jack and when I played as such, the game actually praised me for it!) Sure You Don’t Know Jack 2015’s series of questions and multiple episodes will test you, but that game is just so insane and the presenter Cookie, is a legend! His lines and the questions had me in stitches and while I can laugh quite loud, those I was playing with was laughing louder and harder than I was and Fibbage XL is only just a little less enjoyable.

However I’m still not happy about the whole using phones/tablets/laptops as a controller. Yes it is certainly an interesting way to play, which requires you to visit the jackbox.tv web page and then enter a Room key comprised of 4 digits before you can even play, but it all still feels a little unnecessary. Unnecessary because the likes of You Don’t Know Jack 2015 and Fibbage XL can be played and enjoyed for hours on end, which will drain your battery flat, causing you to stick your device on charge sooner than you’d like to, but the simple fact is without devices like phones, tablets and laptops, the games would not work nearly as well as they do, so it is a necessary evil. So if you are going to play this game at a friend’s house, be sure to bring a charger with you! Although interestingly enough, You Don’t Know Jack 2015 does support single player, so if you do want to play with the likes of a Pro Controller, you can! (Thank god for small mercies.)