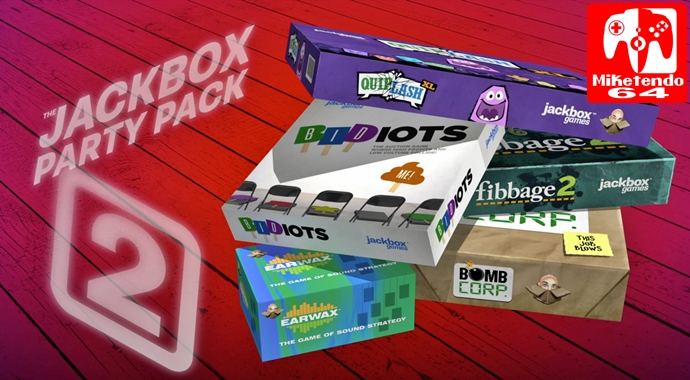 Just like every over Jackbox Party Pack type game (including Pack 4, which comes to Nintendo Switch sometime this Fall,) The Jackbox Party Pack 2 is yet another party collection game, comprised of 5 games and just like I’ve done every other time I’ve reviewed a Jackbox Party Pack game, here’s me providing a brief breakdown on each one, what they entail and their in-game description:

More Fibbage! Lie to your friends, avoid their lies, and spot the truth. “In Arizona, you must obtain a permit to feed ____ to pigs.” Go!

Warning! This game is should only be played by those who like to lie, those who don’t mind fooling for lies and those who enjoyed Fibbage and Fibbage XL as it is the game where lying and getting the right answer, is the only way to win. It’s also a game wear somewhat to extremely bonkers questions will be asked constantly! But hey, you and your friends will be laughing from start to finish and there is nothing wrong with that!

*This is one of three games that supports a Family Mode, which allows you to activate a Family-Friendly Filter to ensure the game remains clean and an audience mode so non-players can join in and participate.

Cow moo? Huge explosion? Or tiny fart? Which to choose? It’s the sound effects game that will leave you up to your ears in laughter!

If you have ever thought to yourself that you could easily put two sounds together that perfectly describe what sex was like in the 1920’s should have sounded like, then Earwax is the game for you as it will actually propose such a thing of you and your friends. It is the music game where the first player to three points wins and at every turn, one player will be made the judge and it is their job to pick a prompt. Once the prompt is picked, every other player must pick two sounds from the list each one is given that they feel describes the prompt the best, or just the funniest. Each selection will then be revealed and it is down to the Judge to pick their favourite one and if all this sounds simple, it’s because it is. But Earwax has a whole lot of prompt choice and sound selections, which means this hilarious experience can be enjoyed for more hours than you could imagine.

*This is another one of three games that supports a Family Mode, which allows you to activate a Family-Friendly Filter to ensure the game remains clean and an audience mode so non-players can join in and participate.

Outbid your opponents for absurd art – drawn by players themselves – and win this strangely competitive auction game! Don’t be a bidiot!

In what has to be the worst game The Jackbox Party Pack 2 has to offer, Bidiots is a game where first you must draw a few paintings and then when all are done, it is time to head to the auction and win whichever ones you fancy. If a painting you drew sells, you’ll get half the money it sold for and if you spend all the money you have (you start off with $3000 dollars,) you either have to sit the rest of the game out, or take a loan of $1000 dollars, which requires you to pay back $1500 when the game is over.

As for the paintings you buy, while you can lose out on some of them, others you can win large on, but the profit you make on them, won’t factor in until the auction ends and all paintings are sold. At that stage loans must be paid off and the final score is tallied, with the player who earned the most, being revealed as the winner. Now I don’t want to put anyone off Bidiots as there are those of you who will enjoy it, but those of us who played it for this review, did not, but we do encourage all who purchase the pack to give it a try.

The laugh-a-minute battle of wits and wittiness in its HUGEST form! Come up with “the best name to give an ugly baby” and win!

Having played Quiplash 2 as part of The Jackbox Party Pack 3, it is the game we play most as far as Pack 3 is concerned, as it is so funny, especially when both Ash and I can be very creative with our responses and the XL version is just as good, but if you don’t know how it’s played, then here’s my explanation:

Quiplash XL, like Quiplash and Quiplash 2, is the “say anything” party game, made up of a couple of rounds, where players are proposed questions/prompts and required to write in their answers in a series of rounds, before the answers are shown and the players most vote for which response is their favourite one and as the rounds go on, more points are rewarded until not before long, the final round has come and it is time to answer one last question and vote for all of your favourite responses. The winner/winners are then decided by whoever has the most points, but do keep in mind that when playing this game with no filter in effect, you can literally say anything you want, as long as it isn’t too long. So if you are going to swear, or be rude, always keep in mind who you are playing with, but play with the right people and the laughter will never end!

*This is the final one of three games that supports a Family Mode, which allows you to activate a Family-Friendly Filter to ensure the game remains clean and an audience mode so non-players can join in and participate.

Welcome to Bomb Corp. Interns of your kind must help defuse bombs in our office. It’s a weird office full of bombs,

If you ever thought of joining the Bomb Squad than this is the game you can do almost just that. Instead of a bomb squad, you are the new employee at the Bomb Corp. which is a business that must have the worst employees ever, as none of the employees seem to even remotely have a clue as to how to defuse a bomb. So it falls down to you and whoever you are playing with, to decipher the clues presented to you on the device you’re using and work together to cut the correct wires. Cut the wrong ones and the bomb will blow up, killing you and all of your co-workers and forcing you to start the work-day all over again and believe it or not, the more you play it, the more suspenseful it becomes. (The last few games I played, had me worried my phone will blow up if I can’t the wrong wire and sure it may seem like an overreaction, but it doesn’t when you’re playing!)

There really is no doubt in my mind. Earwax is the best game this collection offers, but only just as Quiplash XL is a very close second. They are both fantastic, they’re both colourful and well presented, but most of all, those two games alone justifies The Jackbox Party Pack 2’s asking price. But with this being a Jackbox game, once again those who wish to play it, will need to do so using mobile phones, tablets and laptops, but if you have no issue with that and having to enter a certain Room code on a specific webpage, than there is no issue at all for this party pack is virtually flawless and almost as good as the first one.

Just like The Jackbox Party Pack and The Jackbox Party Pack 3, The Jackbox Party Pack 2 is yet another party collection game that promises laugh a minute joy. It has a peculiar line-up of games that guarantee diversity and colourful artwork and one-liners that are virtually impossible to hate. Every Party Pack is a classic in their own right and something Switch owners who like to entertain, should download and even if you can only afford one, you can’t go wrong with either one you choose to buy!