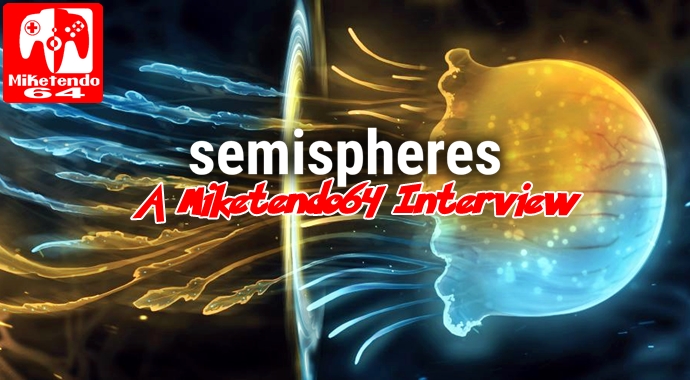 [Interview] Diving Headfirst into the Creation of Semispheres

For a console that has “no games,” new indie titles are constantly flooding the eShop inbetween first and third party releases and pretty soon, Semisheres will be able to count itself among those games. So in light of that, we caught up with the game’s developer and here’s everything he had to say as part of our Semispheres Miketendo64 interview:

Miketendo64: For our readers who have no idea as to what Semispheres is, what kind of a game is it? How does it play and what is your singular favourite thing about it?

Radu Muresan: Semispheres is a meditative parallel puzzle game. You get to control two characters at once, the twist being that they reside in alternate/parallel realities. Having shown the game at multiple events (all American PAX’s, Tokyo Game Show), my most favorite thing is the reaction of people when they go through the first level showing how the worlds are connected.

Miketendo64: Being the “meditative parallel puzzle game” that it is, where did the inspiration behind Semispheres come from?

Radu Muresan: First version of Semispheres was conceived during a game jam – which is a (typically global) event where people make games around a theme. For this one in particular, it was Ludum Dare 30 (in August 2014) and the theme was “Connected Worlds”. I had played “Brothers – Tale Of Two Sons” before and liked that control scheme, but was confused during certain sections when the two brothers crossed paths and decided to “fix” that problem by constraining each of my characters to their own side of the screen.

What Comes Next for Semispheres’ and Vivid Helix:

Miketendo64: If given the chance to, is Semispheres a game you would come back to with regards to DLC for extra levels, or a full-ledged sequel?

Radu Muresan: Honestly, I don’t know at this point. I do have more ideas in this space as they come easily when you spend a lot of time on anything, but at the same time I’m ready for something new.

Miketendo64: Fair enough, and after the release of Semispheres on Switch, what comes next for Vivid Helix? Do you have any other games in the works, you feel would be a good fit for Switch?

Radu Muresan: I still have a couple of platforms left I want to bring the game to. I have multiple options for my next game and the Switch form factor is really great, so I’ll definitely make sure it works well on it.

The Story behind the Semispheres Name:

Miketendo64: Having gone through various name changes, what made you finally land on Semispheres and why did you rule out the previous titles?

Radu Muresan: First name was just temporary during the game jam (“Symbiosis.” Next name was Fusion Orange which was based on a different color scheme (red/yellow merging into orange) but that art style didn’t last for too long (top-down/isometric pixel art). The third name “Replicas” was tied into a potential story, but figured out pretty quickly it was very bad for searching. When I settled on the brain idea, that’s when everything came together.

The Boy and the Robot:

Miketendo64: Giving the number of changes Semispheres has seen since development began, was the boy and the robot always part of the game’s original concept, or was there inclusion something that came along at a later date?

Radu Muresan: The story with the boy and the robot came after settling on the new art style and name. It was actually really hard for me to come up with an interesting story so I had to get a bit of help in that other area.

Miketendo64: Over the course of development, the art style was changed a lot, as you’ve previously stated. What prompted the change and do you have any pictures of what used to be?

Radu Muresan: I think it’s just part of the process to figure out the identity of the game. Semispheres started as a mechanics-first game, where what you do in the game came first and the visuals and story came later. Interestingly, the orange/blue combo just happens to be my favorite color scheme (present in the Vivid Helix logo before Semispheres existed).

As for photos, you can see the full evolution of the art style here:

Miketendo64: With a soundtrack by Sid Barnhoorn, how did you go about getting him onboard and do you have a favourite piece of his when playing a particular level.

Radu Muresan: Sid commented on my devlog on TigSource and he has all the games he worked on in his signature, so I reached out privately to him and got him to actually play the game. I was really excited as Antichamber is one of my favorite puzzle games and his music did so much for the game. I also enjoyed working with him greatly, trying to give him as much freedom to express his own style.

Miketendo64: Semispheres is no stranger to receiving high acclaim, so in your own words, what is it do you feel that makes Semispheres the special and intriguing game so many are finding it to be?

Radu Muresan: It’s a blessing and a curse in a way that the game manages to be surprising. People go in with different expectations and they’re surprised by something they’ve never experienced before. The hard part is explaining why it’s compelling without being able to play it.

Miketendo64: With regards to the Switch release of Semispheres, does it possess any Switch specific features, such as touch-screen and HD Rumble?

Radu Muresan: There are no Switch specific features in the game, however, the Switch release is the only one that features as inverted color scheme so they match the placement of the neon version of the Switch. Blue is on the left and orange (close enough to red) is on the right, just like the neon blue/red Switch. This is still tripping me up as I spent years getting used to it being the other way around.

Miketendo64: Has there been any consideration to bring Semispheres to any other Nintendo platforms such as the 3DS Family of Systems?

Radu Muresan: I haven’t really considered this much. I think due to its design, porting to older handheld systems is difficult. While the art style looks minimalistic, it is hard to replicate in a performant way on older hardware.

Nothing but Praise for Switch:

Miketendo64: As an indie developer, given the keys to the Nintendo Switch Kingdom, how have you found developing for the new platform and what do you think of the console compared to other platforms you’ve brought games to?

Radu Muresan: Developing on the Switch was great! Personally, any new platform will be difficult as you learn all the small details, but I’d say it’s one of the easier platforms to develop for.

Secrets of the Jellyfish:

Miketendo64: The image most associated with Semispheres is that of a Jellyfish, what prompted such a thing?

Radu Muresan: The whole game is centered around the brain as a theme. The name, story, characters and background, even the duality (left/right brain) and color scheme – they all play into this. The background is inspired by a neural mesh and the main characters were initially my closest representation of a neuron, which happened to look like a jellyfish so I just went with it.

The Thought Process of a Developer:

Miketendo64: While I may not make games myself, I am a published author, so I’m no stranger to having a bizarre through process, so on that note, what would you say is your thought process when it comes to working on games and did you do anything differently with Semispheres?

Radu Muresan: I’m a huge believer in having a vision and using that to guide any decisions. I wanted my game to be a slow-paced, cerebral (pun intended) game so everything went in that direction. I started off thinking it would be a stealth game, but that morphed into a puzzle game fairly early on and things just flowed out of that decision.

The Gamer inside the Developer:

Miketendo64: Besides being involved with making games, do you actually get much time to play games yourself and are there any games you are particularly fond of playing?

Radu Muresan: I still find time to play games. My most played game is by far FTL. Second most played game/series is anything Souls-related. I try to focus on indie games because of having limited time and being able to get different kinds of experiences out of them.

Miketendo64: And because there’s always time for one last question, here’s ours. Is there anything you would like to say to your ever growing fanbase and supporters?

Radu Muresan: All I can offer is a guarantee of a unique experience that will completely mess with your head and thanks for taking your time to read this!

Radu, you have been an absolute star and we thank you for answering our questions. We can’t wait for the Switch release of Semispheres and the day we post our review of your colourful thinker of a game!