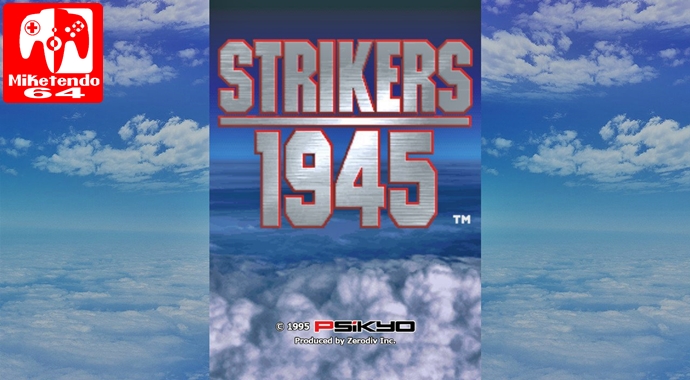 While most games that launch in the Nintendo Switch are announced a couple of weeks or even months in advance, some games do the complete opposite. Nothing at all is said about them and then Bam! They’re released worldwide and anyone can get if they’re willing to pay for it and today, I am reviewing such a game!

Developed and originally published by Psikyo back in 1995, Strikers was and is, a vertically scrolling arcade shooter where players can control 1 of 6 available aircraft and go to war against an emery wielding advanced weaponry and after the occasional release over the years, it’s finally on a Nintendo platform.

It is by no means the best arcade game on Switch as there are plenty of games that are all deserving of such a title, but’s it’s not a bad game either. It is easy enough to sink yourself into and although it may not be as content packed as consumers would like given its price, it is of course an arcade game you will only ever have to buy once instead of using up all your pocket money and you can play it with a friend. Plus it’s an arcade game with a story.

Set in the year 1945, just after World War II has ended, a mysterious organisation called C.A.N.Y emerged with desires to take over the entire world using weapons so advanced that the likes of them had never been seen before. To counter the bid for world domination, 6 of the world’s best fighters were gathered together to form a team called Strikers and it is this 6 fighter pilots you can play as when playing through the game.

For anyone who would like to know a bit about the pilots and their partnered plane, here’s the lowdown. There are two pilots from the United Sates, with one being the 23 year old Cindy Volton who pilots a P-38 Lightning, whereas the 21 year old Tiny Prize pilots a P-51 Mustang. Representing the United Kingdom and piloting a Spit Fire is the youngest pilot of the selected 6, is 15 year old Alice Herring, whereas the 19 year old Lean Beirer pilots a Bf-109 and is from Germany. As for the final two pilots they are both from Japan and are 17 year old Ai Mikami and her delightful Zero Fighter and Ainzaemon (from Sengoku Ace,) who is 28 and flies a Shinden J7.

Now, with that out of the way, it’s gameplay time! Although there are 6 different type of planes to command, each with their own type of attacks, they are all united in the fact that they each have three attacks. One being a quick fire attack, which will you’re your bacon most of the time. Another which is a charge attack and one that lets lose a devastating bomb that deals a whole load of damage. As for the levels, no buttons are required to fly the plane, other than the analogue stick to move the plane forwards, backwards, left and right and you’re going to want to move around a lot, because while you can shoot at the enemy, they can shoot at you.

In fact not only can they shoot at you, it’s not just enemy planes you have to watch out for as there are turrets, ships that traverse the sea super giant airships that end up turning into super weird, but rather call mech bosses for each zone, but hey, you’re the one with the super bombs and are able to acquire a range of power-ups like increasing your attack power, although you will need to keep on defeating enemies until they appear.

Now although you can not acquire extra lives, you can set yourself to have more in the game’s settings (max is 9) and as well as being able to continue twice upon dying, you can of course play with a friend as well, but should you fail to make it to the 8th and final stage and defeat the last boss, which can all be done easily in an hour, you can always reduce the difficulty setting as Strikers 1945 comes with 7, starting with Monkey as the easiest one and Very Hard as the hardest setting and that’s pretty much it. I don’t mean to try and serve you up a short review, but there really isn’t all that much to Strikers 1945.

With such little content and a somewhat high asking price, Strikers 1945 is not a game I can easily see myself recommending to others. Not to say it isn’t a nice game, but that’s all it is. It’s a nice game, with nice graphics and nice music that can get a little mundane after extensive gameplay sessions. But hey, it is an arcade game you can take on the go with you and doesn’t require all that much effort if you play it on a lower setting, so you can easily achieve something like a new high score, before getting back to whatever it is you have to do, like resume working or finishing a school exam. So if you’re willing to give it a try, then good on you and if not, Zerodiv have plenty more Psikyo games they would like to bring to Switch so even if you don’t like Strikers 1945 or Gunbarich, you can always try out another of their offerings when they arrive later on this year.