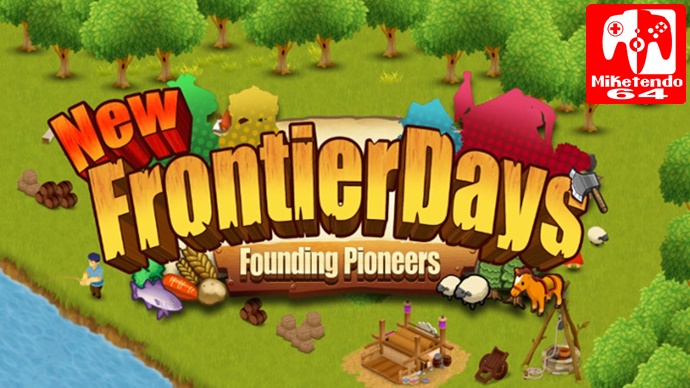 Wonder what it may have been like when the first Pioneers went to America. Setting up camp, building an outpost which would turn into a town and then into a thriving city? Well wonder no more as New Frontier Days: Founding Pioneers allows you to do just that! in what could be described as a cross between Civilization and Sim City, New Frontier Days has you go try to work with virtually nothing besides a few ammenities to get you going, you then have to task your fellow pioneers to chop down trees, hunt boar, shear sheep and build up your little settlement. Seems easy enough and after a few play-throughs and getting to grips with how to better manage your pioneers without running out of resources or having your entire settlement be utterly destroyed by a giant boar  on a rampage (yes it can happen).

This point and click adventure would sit well on PC and feel right at home on mobile devices but it is a welcoming addition to the Switch Library as well. Though it has simplistic sprites and rough animations, it’s colourful graphics and texturing will suck you in anyway and the music never seems to grate either. I rather enjoyed it and even after promising myself I will only play it for an hour here and there, it basically became all I played and the whole day disappeared from me. There are various modes which all offer the same thing so your best bet is to go through Story Mode to learn the basics and find your feet. in Story Mode, most features and buildings are locked until you can level up your settlement enough to progress to the next age. You will then be able to unlock new buildings that can create better materials which are required to construct even newer buildings. It is an endless cycle and will have you grinding away for hours but then again, it is where most of it’s charm is so watching your settlement become more expansive and self reliant does give you a sense of accomplishment.

Other modes include Free Mode & Survival Mode, Free Mode allows you access to all buildings and features from the get go and will basically let you go on your way without hindrance or ‘Natural Disasters.’ Challenge Mode on the other hand, you can choose which difficulty you would prefer which will depend on how much of a masochist you are as the higher difficulties will throw more hardships at you and more chances of bad things happening to you and your settlers.

Of course, what kind of game would it be without any drive for success? Well of course the game would be a little boring so naturally there are objectives like hunting animals, create buildings, process a certain amount of materials, etc. Completing them will reward you with more cash, materials or gems that you can use to upgrade your buildings to open up more functions like processing better materials. Fulfilling certain tasks unlock achievements and also open up a piece of a larger picture of some of the game’s artwork.

I have spent a lot more time playing this game then I thought I would and rightly so, it is a strangely compelling title that keeps you going long after promising yourself that you will only play for 10 more minutes. It is a pleasant change of pace to the many other types of games that are currently available. My sister who is a big Mass Effect fan and loves her shooters and extreme violence, found herself fully immersed in its appeal. So, I guess what I should say is, if you are looking for an affordable game that you can easily sink some hours into, then definitely give this game a try because at just $9.99 it isn’t going to break the bank and will definitely keep you entertained.