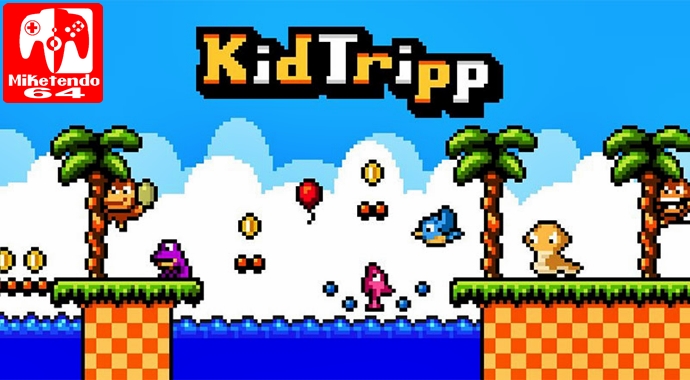 While the Nintendo Switch may be getting its fair share of games this week, the Nintendo 3DS has quite the impressive line-up as well and while the Switch version of Kid Tripp isn’t out on Switch just yet, the 3DS version is and it is well worth its $3.99 price-tag.

Developed by Four Horses, aka the developers who brought Digger Dan DX to Nintendo 3DS in 2016, Kid Tripp was first brought to life on iOS devices back in 2013, Kid Tripp is a runner platformer, where the titular Kid Tripp must automatically run his way from one end of the level to the goal on the other side of the level, with the help of the player to allow him to throw rocks, avoid enemies and collect a lot of coins!

Content wise, there isn’t all that much to it as Kid Tripp is a rather short game that only has 4 different themed worlds that are made up of 5 levels each, but it does run at 60 fps, looks smooth through-out thanks to its charming pixel art that gives Kid Tripp a certain Super Mario Bros. vibe and has an awesome soundtrack. A soundtrack that really does add to the game and is composed by Chris Kukla.

It also has a “story” that shows the titular Kid Tripp crashing a plane into a Giraffe, before being chased off by animals, causing the game to begin in the first place, but even though Kid Tripp is a short game, (easily enough to complete in a single hour,) it is a game you can keep playing over and over as there are 14 challenges to complete, Gold Trophies to earn on each level and a records screen. Plus in the event you die whilst playing and use up all 10 of your lives that you start off with you can of course continue from the level after the last one you completed and earn additional lives provided you collect enough coins.

Still let’s not make it out like the game is perfect, as a little more could and should have been done with it. Things like adding a couple of additional levels for the 3DS version just to give it a little more oomph, or a jukebox so the delightful tunes can be experienced whenever the player wishes, but the 3DS version is in the bag now and out in the public. All we can do know now is hope the Switch gets the deluxe edition and even if it doesn’t, it wouldn’t be the end of the world.

Kid Tripp may not be the biggest of games and it will not knock your socks off, but it is enjoyable, it is a game you can pick up and play at your own leisure and it is without a doubt the definitive version of what was already a decent game on mobile devices and a smooth port.