Niantic Go All Out with Details for New and Upcoming Pokémon GO Events, including “Safari Zone!” 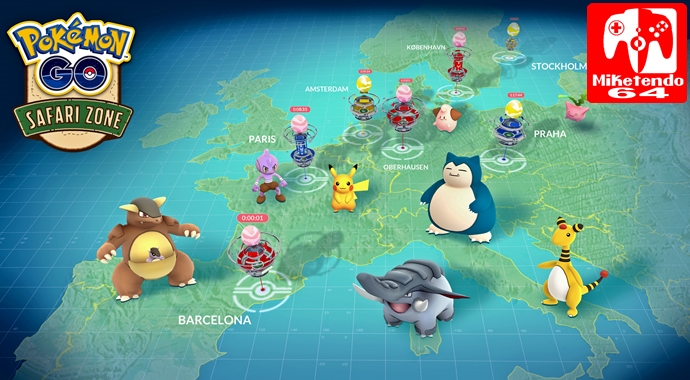 In 2016, Niantic took the world by storm with the release of Pokémon GO. It was the app that dominated the Summer and now one year on, the stage is set for Niantic to do it once again thanks to a series of events which you can read all about, right here:

Pokémon GO Fest (Saturday, July 22 taking place in Grant Park, Chicago, IL) is fast approaching, and we hope you’re all as excited as we are. We wanted to share some details about how Pokémon GO Trainers everywhere can participate in a global challenge with Trainers at the event to unlock special rewards worldwide.

During the day, there will be three Challenge Windows in which Trainers everywhere will work alongside those in Chicago to unlock global rewards. During the Challenge Windows, Trainers in Grant Park will attempt to unlock perks for Pokémon GO players around the world by catching certain types of Pokémon. Each Pokémon- type will be tied to a different perk, so Trainers at the park will need to carefully choose which Pokémon they catch. Will those in attendance try to catch Electric-type Pokémon to reduce the distance required to hatch Eggs, or Grass-type Pokémon to increase Stardust bonuses, or other Pokémon- types to secure a variety of other bonuses? Join in the action and find out!

Meanwhile, Trainers outside of Chicago will attempt to catch as many Pokémon as possible during the Challenge Windows to extend the duration of the bonuses unlocked by those attending the event. If Trainers around the world catch enough Pokémon, a mystery challenge will be unveiled in Grant Park that, once completed, will unlock an extra-special bonus across the globe. Trainers everywhere will want to grab their friends and family to help make this the biggest celebration in Pokémon GO’s history!

We’re excited to announce that a variety of Pokémon GO Safari Zone events will be taking place at select Unibail-Rodamco shopping centers during August and September!

All seven Pokémon GO Safari Zone events will give Trainers the opportunity to catch a wide variety of Pokémon in special zones featuring Pokémon originally encountered in the Kanto and Johto regions, including some Pokémon never before encountered in Europe! Additionally, Trainers in attendance will join forces to take on unique and powerful Raid Bosses that will be making appearances at these events.

For any of our readers who would like even more information about the events, be sure to check out the all-new Pokemon GO events page by clicking here, or click on any of links below to be taken to their associated page detailing their event even further: