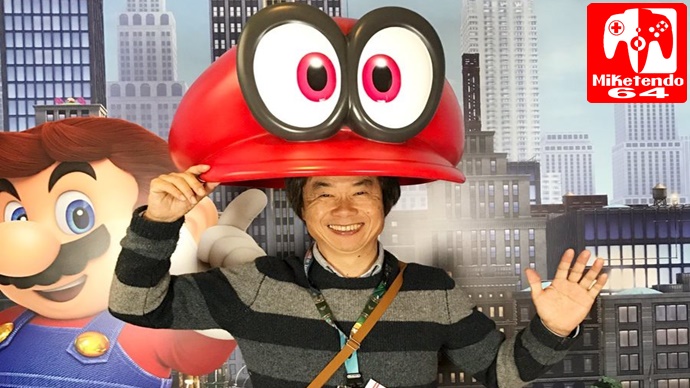 During a recent interview with GameInformer’s Ben Hanson & Kyle Hilliard, Miyamoto gave his thoughts about Super Mario Odyssesy, how he feels about the Nostalgia of his games and videogames in general and whether Mario turning into a T-Rex could ride Yoshi. Here is an extract below.

On whether Super Mario Odyssey was influenced by Zelda: Breath of the Wild…

Miyamoto: I think starting with myself, there is an underlying philosophy that goes across Nintendo. For example, the Mario team and the Zelda team are in two different places – one is in Kyoto, one is in Tokyo – so they don’t have direct communication. But the people who are leading that and organizing that have this underlying philosophy that they have a pretty direct connection with myself.

In terms of Breath of the Wild and Odyssey, honestly if we were to have waited until the success of Breath of the Wild to make Odyssey it would have been too late. So it’s not that they influenced each other. I think what I did with both teams was when I touched any of the prototypes or tests that they would bring me, I would try to make sure that it feels good, and that it feels good being in that world, and that’s what I did for both teams. That was my role.

I think it’s okay and it’s great for Mario to keep evolving. Even with this title, the idea of New Donk City? The idea of being in a realistic city with people of normal height hanging out, and Mario’s hanging out and he’s like half their size, we were definitely worried and we were worried that people might not understand it or be able to accept it. But it seems like it has been pretty accepted and received pretty naturally. With Mario jumping up and down on a taxi or walking at the edge of a building? It seems like people are accepting it naturally. I just want to make sure little kids don’t go copying him and do that.

It’s both. I definitely feel both. We actually found, internally, found a working arcade machine for Mario Bros. and the winner for the t-shirt design contest? I actually has the opportunity to play with them, and against them in Mario Bros. and it brought back a lot of memories and was very nostalgic, but at the same time it was still fun to play with that old game.

You can catch up on the rest of the Interview here.