Sushi Striker: The Way of Sushido Comes to Nintendo 3DS in 2018 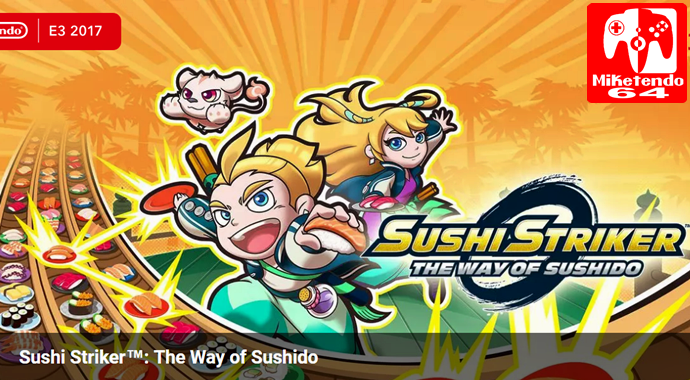 It seems we were right to expect more games to be revealed at this year’s E3 post Nintendo Spotlight, as another game has been revealed and plenty has been shared about it:

First up, the game in question is Sunshi Striker: The Way of the Sushido, which is classed as being a Conveyor Belt Sushi Puzzle Action game that is being developed by Nintendo in collaboration with indiezero. A 2017 release is not on the cards as it will release next year, but the following trailer, Treehouse video coverage and fact sheet has been shared to give us all a better idea of what kind of a game Sunshi Striker really is:

In the fast-paced world of conveyor-belt sushi fighting, match colored plates and types of sushi to hurl tall stacks of plates at your opponent. The more matches you make, the taller the plate stack and the stronger your attacks will be. Defend your homeland from invading enemies in this puzzling action game so more people can enjoy delicious sushi in peace. May the best sushi samurai reign supreme!

Hopefully with a bit of luck, Nintendo will have something else to show off on Day 3, and if they do, you can be sure to read all about it here at miketendo64.com!