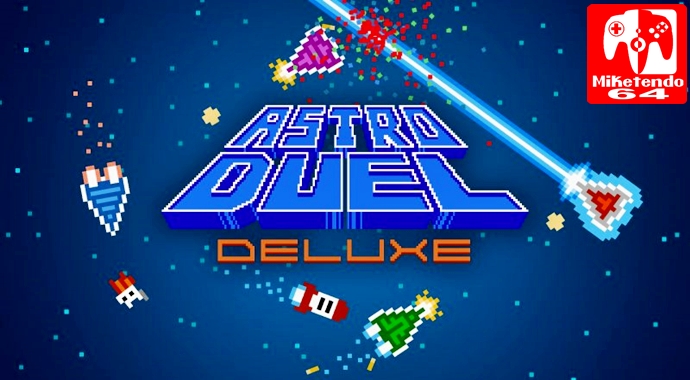 If you’re a lover of arcade games or just have a penchant for local multiplayer party games, than get ready to add Astro Duel Deluxe to your growing Switch collection at the end of this month, because this fun little party game comes packed with arcade action and is hard to put down!

Not only is it a game that is hard to put down though, it is a game that is more immensely enjoyable than you could first imagine and I’m not over hyping it. When I was reading the game’s description, specifically this portion of it “Game rounds are quick and defeat is sudden as you blast enemy ships, or run over your friends’ shipless pilots. (Hilarity ahead!)” all I could think was, “is it though? Is the act of running over my friend’s pilot as hilarious as it is being made to be?” And it turns out it absolutely is. I only had to run over one pilot before I wanted to do it again and again and all of a sudden I was this ship destroying monster on a murderous rampage to run over pilots and then when I finally got off, I realised I spent playing the last three hours playing the game.

If this was a game you would encounter in an arcade, it would have cleaned me out, but thankfully a one-time only payment is all that is required, there is still plenty of coins rolling about in my pockets. Still while being an arcade does have its benefits in some aspects, it does have a few negatives. Firstly while some arcade games do have a story, Astro Duel Deluxe doesn’t. There isn’t a true one player campaign either, as even classic mode can support up to 4 players, whereas Chaos will allow up to 6, and Party insists on having two players minimum. Sure you could play along but sync a second remote to fill the void and add a ton of CPU to face off against, but this game is better when playing others.

Don’t get me wrong, the CPU in this game are quite the clever sort and can go from being Easy to Hard, but being a party game, Astro Duel Deluxe performs best when there is a “party” of you playing. You can’t laugh and joke with CPU, but you can with friends, which is something that makes this a great alternative to Super Bomberman R, 1-2-Switch and even The Jackbox Party Pack 3. Just know that this fun and frantic party game does have same-screen local multiplayer and while it is playable when there are two of you hunched over the Switch, TV mode is the best way to play. But if none of your friends are interested in playing with you, like I said already, you can play on your own and all three modes feature the same game types with the same number (13) of playable levels.

As for the difference between the likes of Classic and Chaos, Classic features Safe Spawns and Balanced Gameplay. Party mode supports Touch screen controls, and as for Chaos, (chaos by name, chaos by nature), brace yourself for Close Spawns and plenty of Power-ups. (Power-ups include Shield, Scattershot, Reflector, Jouster, Missile and Laser Beam.) However I have yet to actually mention just what kind of games you can expect to play so let’s correct that. First up there is Pilot Hunters, a mode where you must destroy the ships of your opponents and then their pilots. Or forget about pilots entirely and play Ship Hunters, where the goal is simple, destroy your opponents by any means.

But for those of you who don’t like working alone, you can always play Team Deathmatch and play with others, or go against them in Team Annihilation. The choice is yours and if you don’t like the current set up of the level, why not shake things up with the Game Modifier option and tweak your experience to something you feel will suit your preferred way of playing? And just like that, pretty much everything about this game has been covered, so let’s wrap this review up.

While Astro Duel Deluxe may not have as much content compared to plenty of other Switch games available on the Switch eShop, it does have plenty of replay value when playing with friends or with CPU. So much so in fact it is a party game worth getting enough, so for those reasons alone I give Astro Duel Deluxe a 7/10. But if you need more convincing to get it, how’s this, not only can you run over your friend’s pilot, but you can also destroy ships by pushing asteroids into them? That fact alone should interest you, but at the end of the day, it is your money and your choice.