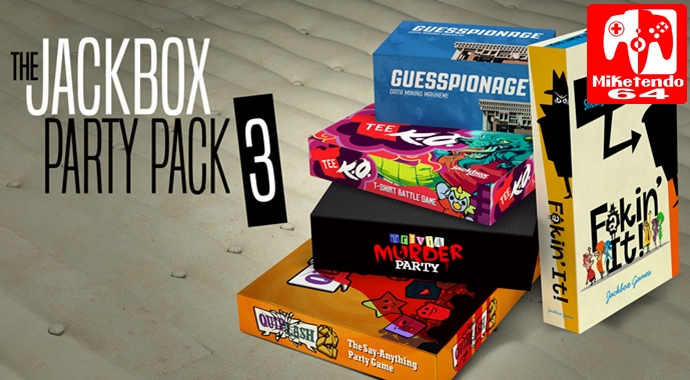 [Review] Keeping the Party Going with The Jackbox Party Pack 3

With our 1-2-Switch review finally posted, it’s time for us to jump from one party straight to another as the time has come for us to post our review of the Nintendo Switch’s other available party game and it is of course The Jackbox Party Pack 3.

Right off the bat you would be right to expect good things from such a title since The Jackbox Party Pack 1 and 2 were rather well received and 3 is just as good as a party game as its predecessors, if not better! Sure it’s not an all new game as it did in fact release back in 2016, but with quite a few titles on Switch being ports anyway, why not have a game like The Jackbox Party Pack 3 on Switch? It is after all the self-proclaimed “threequel to the party game phenomenon.” Plus as a party game that has 5 games as part of its collection, a great amount of fun is guaranteed, especially when you take into consideration just what those games entail. And we’re going to do just that!

Guesspionage is a 2-8 players mini-game in which sees players having to guess the results to some outrageously funny, yet stupid survey questions while some aren’t funny at all. (One such questions is asking players how many people do they think had admitted to texting whilst driving.) Once the player whose turn it is, has answered, the other players then get the chance to vote higher or lower.

Provided players are within 30% of the actual answer, points will be dished out and, with more being given out the closer players are to the correct answers. For the most part, Guesspionage plays out exactly like this until the final round in which one question is asked and 9 options are given, which players must pick three off and the more voted their answers are, the more points they will get and then the player with the most points wins.

If you love the Saw films, then there is a good chance you might just love the Trivia Murder Party mini-game, as it is the mini-game that will see you fall into the clutches of a trivia obsessed killer. Get a question right (bear in mind questions can literally be about anything), you will win $1000 dollars, but get it wrong, you and all the players who guessed wrong will find yourselves taken to the Killing Floor. Should you answer the next question correctly, you get to keep your life and carry on with the quiz, but if you get it wrong, consider your life over as you will get murdered and then spend the rest of the game as a ghost, with only one chance of returning to life, which is by possessing the body of one who is still among the living, and attempt to escape the killer and darkness. (Yes you can actually survive this 1-8 players game, but you will have your work cut out for you.)

As far as the Trivia Murder Party goes, I am a huge fan of it. The murderous narrator is hilarious and has a great voice. The questions will test you (one example being a question where you are asked which finger to cut off when you’re in the Killing Floor,) and it is actually really hard not to enjoy the game, even if you have died five times in a row. But it is easily the second best game The Jackbox Party Pack 3 has to offer.

I hope your acting skills are up to par as the 3-8 player Fakin’ It will require your very best faking if you wish to fake your way to victory! The way it all works is players will need to arm themselves with a device in which they can go online with and most will receive a prompt such as “Raise your hand if you’ve never kissed a girl.” But if you’re the faker, you won’t get such a prompt, you’ll just have to use your own cunning to decide what you will do in order to fit in or do nothing and lie!

Come the end of each round, players will then need to guess who the faker is and if the vote is unanimous and the faker is caught, the players will receive points, but if the faker avoids capture, the faker gains points and the process just keeps on going, round after round until the game finally draws to an end and the player with the most points is crowned victor.

There are fighting games and then there are drawing games in which sees players draw their own custom t-shirts and put them in a battle to the death with the custom designed tees of other players and Tee K.O. is the latter. As far as I am concerned, there will never be another 3-8 players brawler like Tee K.O and I really hope there isn’t as Tee K.O. is a little over the top at it is. But just because it’s over the top it doesn’t mean it is a terrible game as it is fun, it is mildly fast and it has players draw designs of whatever they want and then create a slogan or more before custom tees are created and those tees fight it out until one remains! (I say fight, but what I really mean is players vote on which custom tee design they like most, still Tee K.O. is a game that is to be seen, to be believed!)

If you know anything about Jackbox Games and their party pack games, you will be fully aware of Quiplash and Quiplash 2 is everything you could want from a Quiplash title. It has a great vocal host, a weird array of questions and a new final round in which players are required to provide text for an unfinished comic. Unlike previous Quiplash titles though, host players can now create prompts of their own and even censor other players to make sure they don’t say anything you don’t want them typing in their quips, which players will later vote on.

While I may not have spent the same length of time playing all the games, each one is highly enjoyable, especially Quiplash 2, I do of course have two issues with The Jackbox Party Pack 3. The first issue is the fact most of the games require a minimum of 3 players. I know it’s a party game, so 3 is understandable, but it would have been nicer to have been able to play every game going with 2 players, as opposed to being 2 players using multiple devices just so we could flesh out the roster. As for the other thing I detest, while I do like this game on Switch, it is actually a game played with phones, tablets and laptops.

Sure you can watch the ensuing action on the Switch console or on a TV screen, but you still need a device in which will go online and let you load up jackbox.tv and enter the room key (a small code of four letters) in order to play and depending on the game, you can join as an audience member, in which 10,000 are supported. (Now I don’t know about you, but surely any game in which can have 1o,000 viewers, while 8 players battle it out, is a great game, especially when the game in collection also has better means of streaming and sharing content as well.)

The fact of the matter is, minor issues aside, The Jackbox Party Pack 3 is a great party game by Jackbox Games. Quiplash has never been better and since it is half the price of 1-2 Switch, it is without a doubt the better investment and is a game players will enjoy no matter who they are with. So with everything above into deep consideration, I score this party game a deserved 8/10. The Jackbox Party Pack titles may not quite be on the same calibre of Mario Party, what with being completely different, but the series is swiftly catching up and is almost as every bit as enjoyable as a fantastically brilliant Mario party title.