[Interview] The Beginning of a Legacy (Breath of the NES)

May 10, 2017 A Miketendo64 Interview, Breath of the NES, Fan Project, Interview, May Feature, WinterDrake 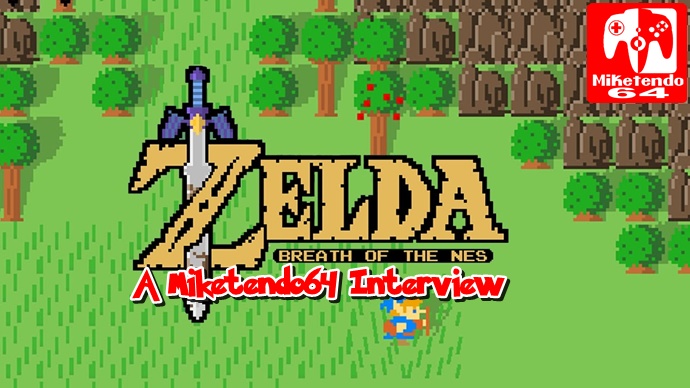 If you consider yourself to be a Zelda fan, or an avid Nintendo news reader than there is every bit of a chance that you heard about the Breath of the NES fan project that was in the making. Sadly that particular project had to be shit down to due Nintendo issuing developer WinterDrake a shut-down notice, but the story of Breath of the NES is far from over. WinterDrake plans to take his initial creation and make is something so much more and hungry to know more about what it will become and what it was, naturally we just had to interview him about!

In typical interview fashion, would you mind introducing yourself to our readers and tell us a bit about your background?

Breath of the NES’s Creation was Inevitable:

Miketendo64: First and foremost, if you were given the opportunity to go back and do it all again (create Breath of the NES) would you?

WinterDrake: Absolutely! People really enjoyed it and I got a lot of ideas, inspiration, and attention that has empowered me to build it into a bigger, better game.

Miketendo64: Sounds promising, but since you brought up people enjoying it, care to elaborate on that a little?

WinterDrake: I personally saw a lot of positive reaction to it, despite the demo being very basic and only a fraction of what I have planned. If people liked that demo, they’ll be blown away by what’s to come.

Miketendo64: But back to the demo, just how many times was it downloaded, whilst it was available?

WinterDrake: There was a total of 67,214 downloads!

Miketendo64: Those are some good numbers!

Developing Breath of the NES:

Miketendo64: What were the hardest things to implement in your Breath of the NES demo and what was the easiest?

WinterDrake: It was pretty easy to program things like setting your weapon on fire, but I actually never even got around to programming water physics in the game. Programming water is actually on my to-do list this week, and it isn’t going to be easy.

Taking Breath of the NES Further:

Miketendo64: Well, there certainly is no denying that Breath of the NES creation, which Nintendo has now shut down, gained you a lot of attention in recent weeks. Had you been able to continue with the game, what ideas were you most looking forwards to implementing and just how far were you willing to go with it and what inspired the demo in the first place?

WinterDrake: I definitely wanted to take Breath of the NES further, adding more areas and complexity to really offer a great gameplay experience along with the nostalgia. The demo itself was of course inspired by Nintendo’s own 2D Breath of the Wild prototype, which everyone seemed to go crazy over when it was shown off.

Miketendo64: And purely because we’re talking about taking it further, having played the demo myself, I really enjoyed it and it left me wanting more. What would version 1.4 have been like if you didn’t get the takedown notice?

Breath of the NES’ Successor:

Miketendo64: After the shut-down notice, you admitted to continuing on with the game, but making it an original game instead. How is the original game coming along and have you scripted a story for it just yet? (Or at least have a direction you would like to take it in?)

WinterDrake: The original game is coming along slowly but surely, I have several people helping me out with concept art, graphics, and music. I don’t have a story for the game yet; much like Nintendo, I’m developing with gameplay mechanics first, story later. The overall theme of the game is adventuring and discovering/experimenting with the unknown.

Miketendo64: And since it is going to be an original game, with your own original content, how have you found working on it now and are you still receiving offers from various devs looking to assist with the game, much like they were doing when the game was still Breath of the NES?

WinterDrake: Definitely, I’ve gotten so many offers that I’ve sadly had to turn down many. I need to keep the team somewhat of a manageable size!

Miketendo64: As regards to using weapons and items in the game, will you continue to base them off of the ones in Breath of the Wild or will you be  including your own, original weapons and will they have other uses in the game?

WinterDrake: There are definitely going to be more original weapons, and many more items that can be used creatively even if they aren’t specifically melee weapons. One example is a magic bow, which can only be obtained in a secret store. The magic bow shoots arrows that magically curve towards your targets, making aiming fun and easy.

The Ultimate Demo is in Development:

Miketendo64: Being as though you did put out various Breath of the NES demos, (version updates) will you be doing the same for your new game, so fans can continuing to play and voice their opinions during development? Or is your main focus on just finishing it first and then getting it out there to the public second?

WinterDrake: The current plan is to make a mind-blowing demo for the game. After that, I’ll be launching a crowdfunding project where the lowest reward tier will include an Early Access key to the game, so that people can play it and give feedback as I update weekly or so.

You Can Shut Down Breath of the NES, but You’ll Never Shut Down the Passion Behind It:

Miketendo64: Out of curiosity, due to the whole take-down situation, has it put you off ever wanting to do another fan project, or just Nintendo related fan projects?

WinterDrake: If I have an idea, I’m probably going to make it, especially if other people want it. I would still make another Nintendo fangame if I felt inspired to.

Miketendo64: Since you were doing a fan Zelda game, it goes without saying you must have played Breath of the Wild yourself. What did you make of the newest Zelda game and what are your favourite things about it?

WinterDrake: Breath of the Wild is obviously fantastic, but I think what I enjoyed most was how much it reminded me of the original Zelda for NES, which was one of my favorite games for a time. It’s also very cool how every problem has multiple solutions, which is something I’ve always loved in role-playing games.

WinterDrake: I’m working hard on the game’s successor and I won’t let you down! Be sure to keep up to date with the game on twitter: @WinterDrakeDev!

To WinterDrake, we wish you the very best of luck with your ongoing work and look eager to learning more about it in the coming months. It is sure to astound us all, just like Breath of the NES did!