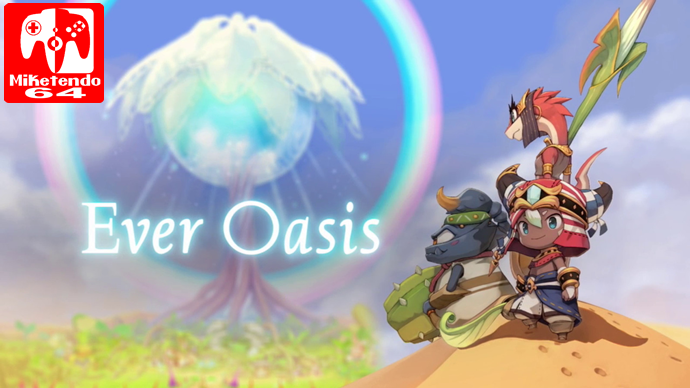 Earlier today Nintendo hosted a media event, where certain members of press were invited to try out a couple of upcoming handheld games and try out the new Nintendo 2DS XL, so with plenty of news hitting the net, here’s another Everything article where we take all of the news shared and put it into one place, this place!

First up, for those of you who have no idea what Ever Oasis is, here is both a description taken from the Nintendo press site, plus the new trailer the Big N released today:

“Koichi Ishii of Grezzo is the producer and the director of the game, and character design is done by famed illustrator Yoshinori Shizuma. Ever Oasis takes place in a sprawling desert with the oasis at its heart. Travelers with different wants, needs and wishes will visit the oasis. Players must head into the desert and locate dungeons. Allies with specific weapons and unique skill sets will join and strengthen the team. Items claimed in the desert can be used as materials to craft items to sell at shops in the game, or give to certain travelers. The game is scheduled to launch in 2017.”

And now that you’ve got a good ideas as to just what exactly what Ever Oasis is, here’s every game detail Nintendo World Report had to share after going hands-on with the game:

And just in case that’s not enough Ever Oasis news for you, here is two gameplay videos of Ever Oasis action:

For those of who liked everything you have heard and read today, you can add Ever Oasis to your 3DS collection on the 23rd of June when Ever Oasis releases. And for those of you who didn’t, not to worry, there’s always Hey! Pikmin.