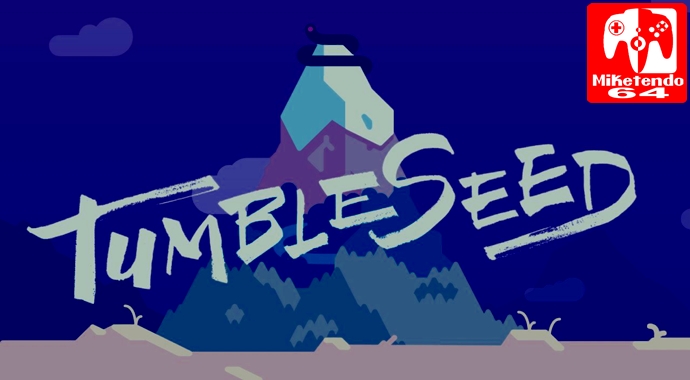 [Review] Rock & Rolling up a Mountain with TumbleSeed

I hope you are ready to play the most roliest rogue-like there ever was because TumbleSeed has arrived on the Nintendo Switch and despite being inspired by Ice Cold Beer, it really is nothing like we have ever seen before.

For a game that is essentially about balancing a seed up an ever-changing and dangerous mountain, prepare to say “Wait what?” There isn’t depth to TumbleSeed, but there’s a whole mountain of depth, complete with subterranean levels and even SteamWorld Dig’s Rusty would have a tough time reaching the bottom, what with it being a rogue-like title. But just because it is a rogue-like game, please don’t write it off just yet.

Here at Miketendo64 we are quite aware that plenty of our readers are not fans of rogue-like games and that’s a shame because Quest of Dungeons and Has-Been Heroes are pretty fantastic titles, even with their difficulty, but TumbleSeed is actually a roguelike with something of a difference. It does not get easier as you progress, but you can restore lives, you can create checkpoints with the FlagSeed and once you master the dual-stick controls, then everything else is a doddle.

I am not for a second going to pretend I am an absolute pro at this game, but the actual hardest thing about it, is manoeuvring the VineGuard wrong (the bar in which you balance your seed on), because you’re over thinking things. I know it sounds trite, but taking a quick breath and relaxing whenever you can will help you, but if it’s more advice than that you need, how’s this: Collect every Crystal you see and don’t be afraid to plant Checkpoints with the FlagSeed. I know it is simple advice, but it’s really all you need if you wish to survive this rogue-like, because if you lose all of your lives, it’s back to the bottom of the mountain with you. Only don’t expect to be able to do what you did before and hopes it works this time around as the mountains’ terrain varies with every encounter, what with being procedurally generated.

Still there’s more to TumbleSeed than just that, there’s fanciful characters you can encounter, quests to be carried out and even varied upgrades that will help you roll your way up the hazardous mountain, whilst avoiding and defeating corrupted monsters and avoiding potholes. Upgrades that includes the explosive yet expensive BombBud that will blow you away if you don’t get to safety. There’s FloodFruit, which is a handy Seed power as this can roll over a seed patch and cause a rain cloud to come and fill potholes with water.  There’s also the ThornVine, which can be a little hard to use at first, but if you ever get this seed down to pat, it can be the only upgrade you’ll ever need, but if avoiding danger is your goal, then the BounceBerry is the seed for you. But just in case you do want to use upgrades other than the ThorneVine, there’s always the Crystal seed that helps with getting crystals and the HeartSeed. Or you can go round collecting all of them and have fun experimenting as some upgrades do work well with others such as the Bounce Berry and the FlyTrap.

But if it’s the quantity of content you’re worried over as you couldn’t care less that this is a game whose story is literally a mountain is in peril and the player must heed its call and plant itself in the centre of its peak, than worry not. TumbleSeed features a leaderboard,  a Daily Challenge mode, Adventure Mode,  5 unique worlds and more than 30 upgrades, so yes this vibrant, whacky, yet insanely beautiful yet frustratingly hard game, does have more than enough content to justify its price-tag.

Also it makes great use of the HD Rumble, as Team TumbleSeed actually took great care to ensure the HD Rumble always paralleled to that the sound was doing, so that when the seed stops, the sound will abruptly fade then cease completely, whilst being accompanied by a slight bump. Sure the PS4 version has rumble feedback, but it does not compare to what the Switch version does thanks to the HD Rumble, as it ensured the devs could go beyond the realm of normality as far as rumble is concerned and make TumbleSeed on Switch the definitive version and in this writer’s eyes that fact alone is enough of a reason in its own right to make TumbleSeed a title worth trying out at least once!

TumbleSeed is not going to win over everyone who plays it as many will walk away in frustration due to not being able to get on with the controls, but for those who stick by it, a hugely rewarding experience awaits. Made by a great team and supporting a fantastic array of colours, ideas and sounds, TumbleSeed is certainly that “something different” that gamers who desire a challenge, desperately seek. Sadly though, I’m just no good at games like this and because I won’t let my own failings affect the score of this game, TumbleSeed most definitely deserves a 7/10. But because I would like this game to get the recognition it deserves, I hope plenty of you know someone who buys it and get to give it ago, because unless you play it yourself and play it for at least an hour, then and only then will you be able to decide if it is a game for you!