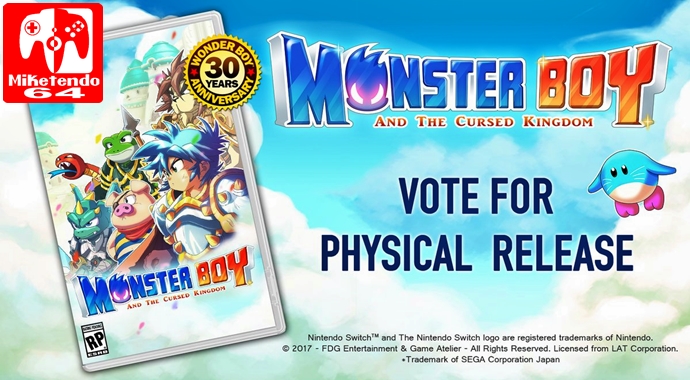 On the 23rd of March, FDG Entertainment got fans excited by expressing an interest to bring Monster Boy and the Cursed Kingdom to Nintendo Switch and now it seems the physical release is likely indeed.

Monster Boy on Cartridge? Vote for a physical release on #Switch Hit 'LIKE' to vote! #MonsterBoyGame #WonderBoy #Nintendoswitch pic.twitter.com/E6XhJJ0bGN

During a Monster Boy and the Cursed Kingdom thread over on NeoGaf, where things such as the recently overhauled graphics were brought up, as was the possibility of the game’s phical release and while nothing is set in stone at this point, it seems a physical PS4 and a Switch release is more likely than a physical Xbox One release. Here’s FDG Thomas’ comments in full and because we like to spoil you, an image of the game’s graphics before the new overhaul and an image of its new and improved look:

“It’s too early to confirm anything but Switch and PS4 have the best chances for a physical release because of a less risky business. That said we love Xbox One too – everyone from the ID@Xbox Team is super nice and helpful. We’ll see! Hopefully there’s enough interest coming from players of all platforms while we’re pitching to retail distributors. The amount of Twitter votes for a physical copy of Monster Boy have been very encouraging so far. Thanks for the continued interest!”

For those of you who have a Switch and can’t wait that much longer for Monster Boy, FDG Entertainment are also bringing Oceanhorn: Monster of Uncharted Seas to Nintendo Switch and it will be out before Monster Boy, so you might now have to wait that much longer since a Q2 release is on the cards, but sadly though, this does conclude our FDG Entertainment related news for this day. But as soon as this story continues, or we get an Oceanhorn for Switch release date, we’ll be back with a follow-up!

So until that time comes, keep on Gaming!