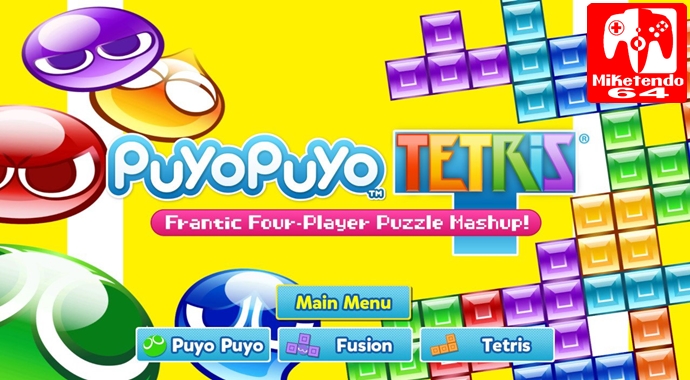 If you owned a 3DS, a Wii U, a Vita or even a PlayStation 3 back in 2014, and lived in Japan, there’s a good chance you played the Sonic Team developed Puyo Puyo Tetris at some point and if you haven’t, don’t worry! It may have taken a few years, but Puyo Puyo has finally come to the West and it is just a fantastic title to play on the Nintendo Switch, although what with there being a demo available, there’s a good chance you know this fact already.

But what the demo doesn’t tell you is just how well Puyo Puyo and Tetris work together and coming from my lips that means something. I have never been much of a Puyo Puyo fan, or even a Puyo fan (heck I’m not even a fan of Doctor Mario and that has pretty much has exactly the same gameplay as Puyo Puyo), but I didn’t mind Tetris so much. In fact there was once a 2 year period where the only game I had on my mobile phone was Tetris and I would play the heck out of it, until I got bored, deleted the game, got a new phone and never played Tetris again. And yet the moment I learned SEGA was bringing Puyo Puyo Tetris to the Switch, I was overcome with a desire to play it and since SEGA emailed me my review key, Puyo Puyo Tetris has been impossible to put down.

Tetris and Puyo Puyo are highly addictive in their own right, but when the two juggernauts were brought together to making this charmingly compulsive, yet somewhat bonkers masterpiece, the result is a game even more so addictive and because it is playable on Switch, you can go from playing it on a huge TV screen, to playing it anywhere you want as long as you remembered to take your Switch with you on your travels.

Now because this is a review and the fact Puyo Puyo Tetris has a lot of content to cover, I would not be doing my job right if I didn’t explain what Puyo Puyo and Tetris is, so if you would like to avoid the explanation, feel free to skip to this and the next paragraph, or you can of course stick around and read them both, it is your choice after all and first up being explained, it’s Tetris! For those of you who have no idea what Tetris is, Tetris is a tile-matching puzzle game that first saw the light of day back in the 80’s. A game where Tetriminos (aka Tetrominioes, which are geometric shapes that are each comprised of 4 square blocks each that can be rotated to the player’s choosing), descend from the heaven and players can place them wherever they please, stacking them up however they like until they place a piece which will complete the line and cause the complete line to disappear, thus giving players a wad of points. But should the pieces go past the top of the screen, its game over. It goes without saying, trying to keep a clear board, is a pretty good tactic, which will keep you alive longer and able to advance through the levels, only to have the game get harder and harder as Tetriminos fall at a faster pace.

As for Puyo Puyo, like I said before, it is a lot like Doctor Mario with the viruses. It is a tile-matching puzzle series that is now published by SEGA, with Sonic Team developing every Puyo Puyo title since 2001, which requires players to organise the falling Puyos into groups of four of the same colour to make them disappear for points. It doesn’t not matter how they touch, just as long as they do touch, but while clearing them as soon as you possibly can is one way of earning points, the best way is to let many Puyos fall and organise them in such a way that just as soon as you pop one group by completing it, that a chain reaction would ensue, causing multiple Puyos to pop, thus earning even more points. It sounds easy enough to do, but actually pulling it off, well that’s something entirely.

And since I said “pulling it off” it’s time we got this review properly underway and talk about how SEGA and Sonic Team did a great job of combining Tetris and Puyo Puyo in the first place. Sure the premise of both games are similar enough, but at the same time they are quite like chalk and cheese and since Puyo Puyo is a series that has been running for quite some time, with its own protagonists and antagonists, it was quite interesting to see the path the developers choose to go with, to bring the worlds of Tetris and Puyo together.

Essentially what they did is they made Puyo Puyo Tetris have an adventure mode that is typical of a Puyo Puyo adventure (bright colours, mildly humorous, enjoyable with mediocre writing) and they brought Tetris to Ringo’s homeworld and the worlds of her friends as well. Now because SEGA’s email regarding the embargo for Puyo Puyo Tetris specifically stated no Adventure Mode spoilers, I am limited about what I can say about it, and while I didn’t mind the story, or the direction it took, it is at times predictable and is not going to win any rewards any time soon, but it could have been a lot worse. Also whilst the story does have its faults, it does serve as a great way introducing players to the many kinds of gameplay modes they can expect to encounter such as Fusion, which is exactly what it sounds like. (A gameplay mode that sees both Puyos and Tetriminos cascading from the top,) it also allows you to unlock an additional 8 characters who can be used when playing any mode other than Adventure Mode and unlock additional stages, greetings and Background Music (BGM.)

Although for a main mode that does come across as being more of an introduction to the full game, Adventure Mode can take anywhere between 4-10 hours to fully complete depending on your skill, and consists of 7 Acts, which each has 10 levels. But even then that’s just small beans in comparisons to the rest of the content this game possesses and yes there is quite a lot of content on and offline. For example there is the Solo Arcade and Multiplayer Arcade, which both allow you to play the following gameplay modes (complete with brief description:)

Obviously when playing the Multiplayer Arcade, aka the local multiplayer mode that supports up to 4 players and local wireless, so four individual Switch consoles can connect together, players can play the above modes particular modes, with the characters you have unlocked. But when playing the Solo Arcade, the player can then chose to do a single match against a single CPU, multiple CPU or even go for gold and try endurance (keep on playing multiple CPU opponents until the player loses.) But Solo Arcade also has an extra bit of content in the form of 6 Challenges and we’ve got details on those Challenges right here:

Then as well as all the above, there’s also an online mode where players can check the global rankings, participate in the Puzzle League (battle head-to-head with players from around the world but know your matches will affect your ranking) and you can also do Free Play as well! (Join or create a room and play a variety of modes, but these matches will not affect your global ranking.) Then of course you can Watch Replays that other players have uploaded, or just join a friend, but just in case you lack the skill or understanding, you can always get a helpful lesson or two.

Last but not least, there’s also an Options and Data screen, which is the plays to go should you ever feel the desire to check out your stats, see if you’ve unlocked any more of the game’s 42 Achievements or even put those Credits you earn from playing the game and spend them in the shop, where you can buy different art styles for Puyos and Tetriminos, or even alternate voice packs for a few select characters! Whatever you decided to do though, Puyo Puyo Tetris without a doubt has something that will appeal to every gamer and does have a ton of content that can and will be enjoyed over and over and over again!

The fact of the matter is, if you downloaded the Puyo Puyo Tetris demo earlier on this month and liked what you see, or just like puzzle games in general, than Puyo Puyo Tetris is literally the best one money can buy as it is just a fantastic all-round and highly addictive title that deserves no less than 8/10.  It is worth its price-tag, it is something you can expect to play a lot, it is a game that you will thoroughly enjoy wherever you are, and lastly, it is most definitely worth the long wait!