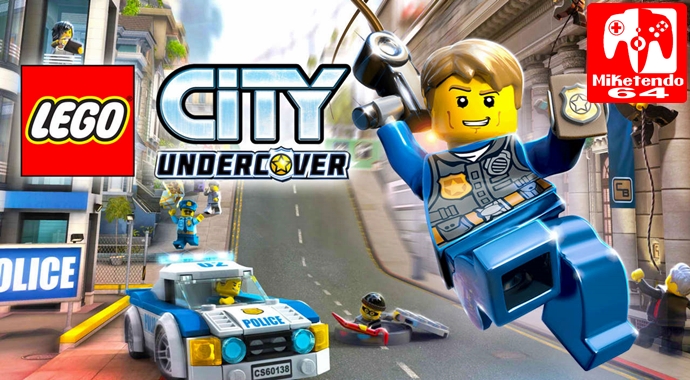 If you have finished The  Legend of Zelda: Breath of the Wild, or have just grown tired of it, than get ready for the next big game that will dominate your life as LEGO City Undercover has arrived once again and it is much more enjoyable the second time round!

Granted in a lot of ways, it is still very much so the game we first saw back in 2013, but now it has been remastered, updated and it now supports co-op play and that is an ultimate game changer as LEGO City Undercover was already a highly enjoyable game, with great writing and humour, but now you get to experience it all once again, but with a friend! As someone who was on the fence about playing LEGO City Undercover, due to it being a LEGO game and the fact that I had left the ways of LEGO behind me long ago, but LEGO City Undercover has truly won me over. But just in case you have no idea as to what kind of game Undercover is, and unaware to its story, allow me to fill you in.

LEGO City Undercover is a game with a vast open world to explore and tells the story of police officer Chase McCain. After being absent for 2 years, McCain returns to LEGO City, a place made up of 20 districts and a place he once called home. But all is not well as the villainous Rex Fury, a crook McCain had put away before he left, has escaped and it is down to McCain to bring him in to justice and even when the Chief of Police orders him not to, McCain refuses to cease his pursuit of Fury.

Going by that description, Undercover sounds something like a nitty, gritty crime noir, but it isn’t. It is very light-hearted, humours and just because the characters are something child play with, LEGO City Undercover is as much as a game for adults as it is for children and because of its theme, LEGO City Undercover has no limitations as such. Instead of needing a realistic and consistent story, the developers were able to take the game’s direction in anyway they wanted to and that direction was making Chase go undercover. From infiltrating gangs and donning disguises, with some having a special feature of their own, such as Police class characters able to wield a Grapple Gun, McCain’s quest sees him pursing crooks across rooftops, to stealing a Tyrannosaurus Rex from a Natural Museum and then blasting off to the moon!

LEGO City Undercover really is something of a wonder that works very well, especially when it does allow you to pretty much do whatever you want. Want to steal a car? Go ahead, you can literally steal any vehicle you encounter. You can go off on a Jet-ski and get yourself eaten by a shark, or get a shark eaten by a gigantic Cheep Cheep. Yes I said Cheep Cheep, the fish enemy well known to be encountered in most Mario Games, as the Switch version contains all of the Nintendo Easter eggs the Wii U version had and they are just as enjoyable as ever, much like the game itself.

But not everything about the game is perfect as it does have long loading times, (very long), which are shorter if you own and play the digital version of the game, instead of owning a physical version of LEGO City Undercover (Switch Game Card), but that’s not the worst. For me the worst thing about Undercover is Frank Honey. I get the fact he is the lovable idiot, but I did not find him lovable. He destroys everything, (which includes the 65 Super Builds that players must erect). He can’t get anything right and he can even be encountered at his parent’s hotel, lounging on a lilo in a pool, with a horse next to him, also on a lilo. Then there’s the fact his jokes are just terrible and he actually unnerved me and I found myself grateful he didn’t have an even bigger role than the one he did. (For me, Honey is only tolerable in small doses and my Player 2 feels exactly the same way.)

Those two issues aside, because of the size of the game, it goes without saying there is a ton of content. So much so that while you can blast through the main story, clearing all 15 Special Assignments well within 10 hours, you could easily spend the following 40-90 hours losing yourself in LEGO City, as there is much to explore and destroy.  I don’t know why, but nothing brings me greater joy when playing this game than playing with a friend, wreaking havoc everywhere we go, blasting goals, destroying everyday objects and terrorising objects. Sure we pause but a moment to collect Studs, Bricks, Costumes (which there are over 300 of) and hunting down aliens, but in all serious honest we have spent more time destroying than working towards 100% completing the game. (We are however at 54% and refuse to play without the other)

All I know is, this game is more addictive than I thought it would be. It’s incredibly funny and creative, with a ton of good ideas at play and it is also a great way to distract oneself when a distraction is sorely needed. There is no doubt in my mind that this will be a game I will revisit from time to time during my Switch’s lifespan and it is definitely a title that has got me excited for LEGO Worlds for when that too comes to Nintendo Switch later on this year!

If you have never played LEGO City Undercover before, it really is one of the best games you could possibly get on Switch. Sure it’s a steep price, but LEGO City Undercover is essentially LEGO Grand Theft Auto, minus killing and prostitutes, but can be enjoyed with a friend, sibling and lover. Sure you can play it on your own, but when multiplayer co-op was the one thing Undercover was missing when it released back in 2013, the fact it has it now, gives the game a fresh feel, which is a welcome addition as it has gone a great way in making an old game feel like a whole new experience. So because of that, all the content and things you can get up to and just how much I have enjoyed it, I take great delight in scoring it a 9/10 and would most definitely recommend it to anyone with a Switch! LEGO City Undercover really is a fantastic game and is most definitely one of the very best ones playable on Nintendo’s new console and just in case you do own it already, you might just want to consider getting it again because if you think you enjoyed it before, you will enjoy it even more on Switch!