[Interview] Getting to Know the Newly Announced 0000 for Nintendo 3DS 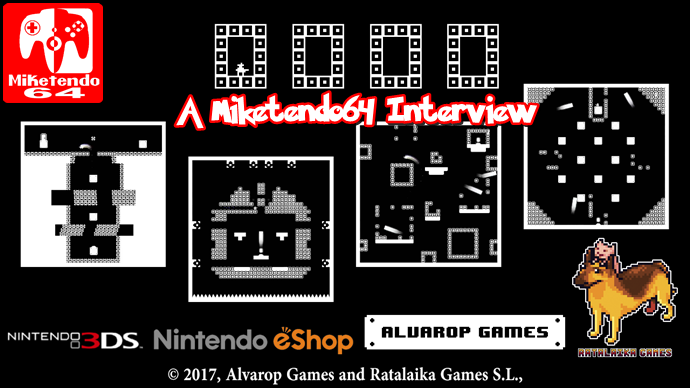 In case you missed it, earlier this week, Ratalaika Games announced a new title for both Steam and 3DS and that tile is 0000. Now given our history and relationship with Ratalaika, you wouldn’t be wrong to expect us to immediately get in touch and arrange an interview, which we’d then post in the same week the announcement came, only that didn’t happen. Only instead of interviewing Ratalaika once again, this time we’ve gone straight to the source and spoke and spoke directly with a member if the team, behind the game, so sit down and make yourselves comfortable, because this is our Alvarop Games with Sebastian Salvagno:

In typical interview fashion. Would you mind introducing yourself to our readers and telling us about your role as far as 0000 is concerned?

Sebastian Selvagno: Hi, my name is Alvaro and I am a video-game developer located in Montreal, Canada, but born in Montevideo Uruguay. I am the developer and designer of 0000.

Miketendo64: Since it is a title of four numbers, just before there can be any confusion, what is the proper pronunciation for 0000? (How do you say it when talking about it to others out loud?)

Miketendo64: Now 0000. It’s an entirely new game, never before released and although this was covered in the official announcement, but for the sake of repetition and for our readers, just what kind of a game is it and why do you think it will appeal to gamers in general?

Sebastian Selvagno: 0000 is a challenging and minimal platformer, inspired by games such as N++, Super Meatboy and VVVV. In it, you play as a 1-bit cowboy and must go through 100 hand-crafted levels made by someone really evil.

Miketendo64: With regards to its 3DS release, you’ve teamed up with Ratalaika Games, the game has grown tremendously in terms of levels and other content, but in what other ways has the game grown since initially conceived?

Sebastian Selvagno: The game has changed a lot since I first started. The game jam version only had 8 levels, just to give you a rough idea! There’s a 100 now. There’s also the race multiplayer mode, which is pretty neat, as well as a level editor to add a community aspect and allow the game to live past the levels I made.

Miketendo64: And purely because I mentioned Ratalaika Games, just how exactly did the partnership begin and how have you found working with the Spain based publisher? Are there plans to work with one another after 0000 has released?

Sebastian Selvagno: I heard about Ratalaika Game’s through another developer I met at an indie game development convention. He’s the developer of Peasant Knight, another game that published by this company. As far as other work goes, yes, we have another project on hold for the moment, but it is coming. No spoilers.

Miketendo64: Because developing a game is never easy, much like with anything worth doing, what has been your worst moment in developing 0000?

Sebastian Selvagno: I think initially, most of the issues I faced while making the game were regarding the “twist” of having levels randomly thrown at you. It took a lot of fine-tuning and understanding of what made the game fun to get it to flow well. Through a lot of playtesting and hitting myself against the wall, I understood that every single level had to be a short, but action-packed experience, that players could go back to and learn something from.

This mechanic also caused a weird issue, where if you got “killed” by two entities at the same time, you’d get stuck between two levels… it was cool looking, but not fun!

Miketendo64: In the official announcement, included in features is “Surreal Soundtrack.” Just what exactly makes this soundtrack so surreal and who composed it?

Sebastian Selvagno: We decided very early on that we didn’t want to go with your classic “chiptunes” for this project. We wanted something more experimental and eerie, while remaining somewhat rhythmic.  I sent a lot of examples to the musician, Levi Bond (http://www.levibond.com/), who came up with a really clever sound identity for the game. Just like the levels, each song is short and randomly selected as you play the game. There’s a lot of variety and weird sounds. Actually, the music that plays in the trailer is the music from the game. I love it!

Miketendo64: With 100 hand-crafted levels that have been thoroughly tested, just how many hours would you say you have spent testing them and do you have a favourite one?

Sebastian Selvagno: I’ve done multiple passes on each level, going from a rough design to testing over and over if everything is “pixel perfect”. Then, I had people play them a lot which resulted in making them easier, most of the time. It’s very easy for a developer to become ‘too good’ at their own game and lose sense of what’s easy or difficult.

I’d say my favorite level is the second one, the one that says 0000 PRESS Z, as it was part of the original game title, back when it was made for Ludum Dare. It’s a nice way to remember where it all started and it brings back a lot of memories. I also really like the idea of tutorials being part of the levels themselves.

Miketendo64: Onto the art style itself. What made you decide to go with a 1-bit art style ?

Sebastian Selvagno: I went with this style because of two main reasons: I wanted to focus on gameplay and level design, and this very limited style allowed me to create assets quickly. This style allows for levels to be very easy to read, and in the more challenging levels that becomes super important. As a side note, the game art-style is inspired by Hero Core by Daniel Remar, an amazing game designer that I admire (Google him and play his games!)

The Modes of 0000 in Slightly More Detail:

Miketendo64: Given the fact that 0000 does include a Hardcore mode, a Level Editor mode and a multiplayer Race mode, is there any chance you elaborate more on just what exactly each mode entails?

Sebastian Selvagno: To put it simply, Hardcore mode is made for players who would really like a challenge. You only get 1 life to go through 100 levels… even I am not able to do it.

The Level Editor allows you to create your own levels and upload them to our servers for other players to use in single and multiplayer mode!

And in Race mode, two players try to complete an X amount of levels as quickly as they can.

Practice mode is Being added to 0000:

Miketendo64: Given the fact that 0000 does include a Hardcore mode, a Level Editor mode and a multiplayer Race mode, is there any chance you elaborate more on just what exactly each mode entails?

Sebastian Selvagno: Yes! People have asked for this and although I was initially against it, we’re putting in it.

The Inclusion of Multiplayer:

Miketendo64: And purely because I can ask it, what made you decide on featuring a multiplayer race mode in the first place and who came up with the idea of it?

Sebastian Selvagno: When we decided to add the new features to the game, Ratalaika Games asked me to come up with some cool design ideas and race mode was born. Since the game is already all about speed – I love watching speedrunners do their thing – I thought a race mode would be the natural thing to add.

Other Platforms are being Considered, but there is Nothing to Reveal at this Time:

Miketendo64: Were a Nintendo Switch release to happen, would you release the game as it is now, or would you aim to have it take advantage of the many features the Switch possesses and in what way exactly?

Sebastian Selvagno: I’d like to see it on the Dreamcast or Virtual Boy – there’s actually a palette inspired by this console. I’m just kidding… there’s maybe some more platforms to come, but Ratalaika Games’ would kill me if I said too much.

Miketendo64: Were a Nintendo Switch release to happen, would you release the game as it is now, or would you aim to have it take advantage of the many features the Switch possesses and in what way exactly?

Sebastian Selvagno: I have not yet been able to get my hands on a Nintendo Switch, and if I did, I’d be too busy playing The Legend of Zelda: Breath of the Wild to even worry about anything else in my life. Seriously though, I’d have to think harder about this, but if the opportunity came, that would be amazing!

Miketendo64: Just out of interest, since you have admitted to plans of working with Ratalaika Games on another game, how have you found working with them so far?

Sebastian Selvagno: What’s great about working with Ratalaika Game’s is that they get game designers. They know this game is my baby and they respect that. I was able to say no when I thought one of their ideas didn’t fit my initial intentions, and they were able to propose amazing ideas to make the game better. In the end, if 0000 was a book, I’d say I’m the author and Ratalaika Game’s is the loving editor that wants the book to reach its full potential.

Miketendo64: Considering the fact your game is up for Steam Greenlight, is there anything you would like to say in an effort to rouse support?

Sebastian Selvagno: Yes, stop reading this and click here (http://steamcommunity.com/sharedfiles/filedetails/?id=851134221), show your love and support for this project. This is first and foremost a passion project, as you can tell. And just like any other indie project, it will make it only if people like you, the reader, show us some love!

Miketendo64: And because there’s always time for a final question, is there anything you would like to say to yours and Ratalaika Games’ fans?

Sebastian Selvagno: Yes, I’d like to tell your readers to remember to support smaller developers. Be aware of what the local indie scene is like, there’s wonderful stuff being made that might have a resounding impact on you. Games are a fantastic medium and publishers like Ratalaika Game’s do their best to bring individual voices forward and allow us to get some players on our humble – but very ambitious – games.

The Wii U may be dead, but the 3DS is still alive and kicking thanks to devs such as Sebastian and Adrian (Vega of Ratalaika Games), who continue to see games released on the handheld platform in-between Nintendo’s forthcoming first party titles. So thank you Sebastian and Adrian for your continued contribution to the 3DS and on behalf of the whole Miketendo64 team, we wish you the best of luck with 0000. Furthermore, should any of our readers wish to get in touch with Sebastian and have some questions of their own they would like to ask, you are invited by Sebastian to do so, by contacting him through his twitter account @theotheralvaro. So what are you waiting for? There really is no time like the present!