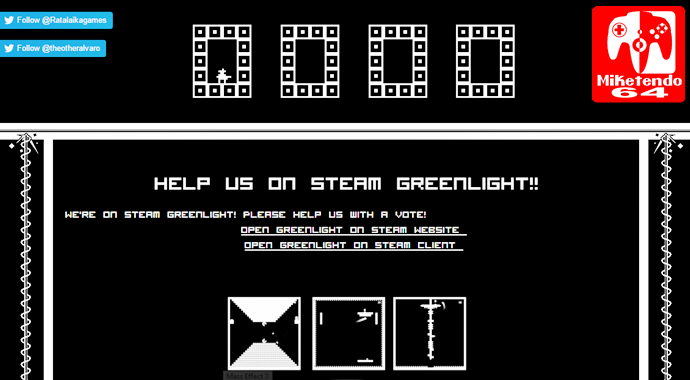 A Ratalaika Announcement: 0000 is Coming to 3DS and Steam

For a while now, Ratalaika Games have been teasing a new game, a game they’ve even exclusively teased here at Miketendo64 and now the time for teasing is over, as the time for the official announcement has come and you can read all about it, right here:

Ratalaika Games – It’s been a while since we started showing some images here and there about our upcoming titles to 3DS. After a long wait, we can finally announce 0000. A hard 1-bit platformer title.

We’re launching a Steam Greenlight campaign for its PC version today (http://steamcommunity.com/sharedfiles/filedetails/?id=851134221) and it will also have a 3DS version that will be launched on the same day as PC for both Europe and America. With regards to the Japanese 3DS version we’re working on being able to launch it on the same day but it may be a bit delayed.

Other platforms are yet to be confirmed but anything could happen! But because these is an announcement, here’s a quick overview and a quick run through of some of its features:

0000 is a hard-as-nails platformer in which you play as a courageous 1-bit cowboy. With your weapon and awesome double jump, your task is to defeat 100 unique levels. Fear not, in 0000 death is never final. Each failure warps you into a new, randomly selected level, until you conquer them all. What awaits those that get to the end? Err… spoilers, dude!

Let’s hope you’re not scared of deadly lasers or evil robots. How about killer pong-style balls and sharp spikes? You better be up for a challenge.

You can find more information regarding the game, along with some screenshots, a trailer and etc. on the official game site, which you can visit by clicking on the link below:

Additionally, if you wish to try out the game, we have got a small demo on itch.io with 10 playable levels. It doesn’t have all the game features and final polish, but you can play online and you are all invited to give it a try! Be sure to click on the link below to do so:

Finally we would like to confirm that OOOO will be on the following languages upon launch: English, Spanish, French, German, Russian, Simplified Chinese, Traditional Chinese and Japanese.

But wait, there’s more! We’ve also got a whole bunch of 0000 images to share and an exclusive statement pertaining to the game that isn’t covered in the press release and you can see all that right here:

0000 was created during the Ludum Dare 31 “Entire Game on One Screen.” Its initial name was 0000 Press Z, but this was later changed later due to the fact that there is no Z button on the 3DS. Back then, the game was already a frantic, hectic, fast-paced, minimal, low-rez platformer, which consisted of 15 levels and one song!

Afterwards, the developer Alvarop Games continued working on the game with the idea of adding more levels to make it a “Pay what you want” title on the PC platform itch.io. When work on the game was almost finished, it was shown to Adrian Vega of Rataliaka Games, who saw the potential and proposed to port it to 3DS and Steam. After some negotiation, both parties agreed to bring 0000 to both of these platforms.

Because of this, it was decided to add more levels (100), implement a multiplayer mode and include a level editor with the same share features Ratalaika Games used in a few of their titles, which includes League of Evil. In light of all this, other platforms are being considered, but nothing is set in stone.

For more exclusive 0000 content, be sure to do as Ratalaika Games said in their press release, and follow them on their social media channels, or tune in to miketendo64.com as the above statement is simply the beginning of what is to come. Until next time, keep on gaming.