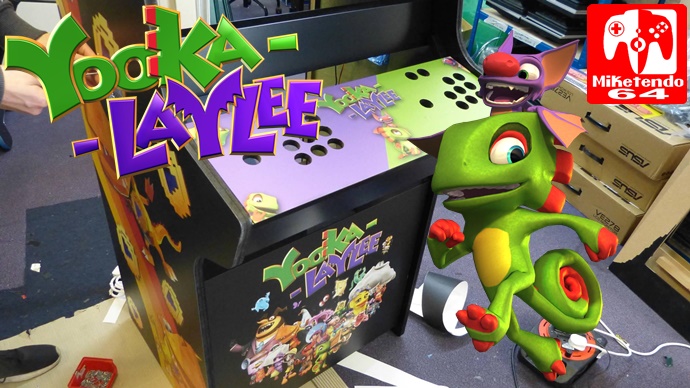 Yes! You did read the title correctly, A Yooka Laylee Arcade Machine has been put together by Bespokes Arcades, in collaboration with Team 17 & Playtonic Games, to help promote The upcoming 3D Platforming collect-a-thon that is Yooka Laylee. It looks old school but it actually houses the latest state-of-the-art technology to bring today’s graphics to the retro scene. It can play familiar classics and can be switched directly to Yooka-Laylee as well and experience it in a whole new way (yet somehow familiar to some) complete with HD Graphics. Here is a unaltered photo of the machine being built.

The final product (and also images of the final product) will be unveiled at London’s Loading Bar, London on Monday 10th april and will be available to play for a limited time. You can see the full prease release down below.

Bespoke Arcades®, Team17 and Playtonic Games Create the Ultimate Retro-Arcade to Celebrate the launch of Yooka-Laylee!

Complete with jaw-dropping Yooka-Laylee themed graphics, the stand-up arcade may look retro in nature, but in fact conceals state-of-the-art technology allowing gamers to play a host of cherished arcade favourites and then instantly switch to Yooka-Laylee, enabling players to experience the game in an entirely unique fashion, complete with HD 28inch screen and powerful integrated sound system!

The Yooka-Laylee Arcade Machine will debut in London’s Loading Bar, London from April 10th where it will remain available to play for a limited time only.

Yooka-Laylee is an all-new open-world platformer from key creative talent behind the Banjo-Kazooie and Donkey Kong Country games. Exploring huge, beautiful worlds, gamers meet (and beat) an unforgettable cast of characters and horde a vault-load of shiny collectibles as buddy-duo Yooka (the green one) and Laylee (the wisecracking bat with the big nose) embark on an epic adventure to thwart corporate creep Capital B and his devious scheme to absorb all the world’s books… and convert them into pure profit!

Yooka-Laylee was funded on Kickstarter in June 2015, raising an incredible £2.1 million from more than 80,000 backers and remains the most funded UK games Kickstarter ever.

Gavin Price, MD of Playtonic commented, “Yooka-Laylee features several really fun, multiplayer arcade games, so when the opportunity emerged to make a real Yooka arcade cabinet it felt like a great fit! Even better, for the coming weeks, you don’t even need to leave the pub to play it.”

Ben Georget, Co-Founder and Managing Director of Bespoke Arcades. “We’ve worked on hundreds of arcades with custom features and graphics, but the Yooka-Laylee machine holds a special place in our hearts. Our team are huge fans of the Rare era and we’ve been looking forward to Yooka-Layee for what seems like forever! We’re delighted to be part of the games’ launch.”

The special edition Yooka-Laylee Arcade Machine will be available to play for a limited time only, exclusively at the Loading Bar, 97 Stoke Newington Rd, Stoke Newington, London N16 8BX from April 10th.

Developed by Playtonic and published by Team17, Yooka-Laylee stars the charismatic new buddy duo Yooka and Laylee, who use an arsenal of special moves to explore – and expand – gorgeous 3D worlds filled with collectibles to discover, secrets to unlock and a cast of quirky characters to meet (or defeat).

Founded in 1990, Team17 Digital Limited is a leading international games label that hosts the Worms franchise, Yooka-Laylee, The Escapists, Overcooked, Way to the Woods and many more from amazing developers around the world. Visit www.team17.com for more info.

Founded in 2014, Playtonic Games is an independent developer based in Derby, UK. Between them, the Playtonic team has over 100 years of combined experience working on legendary gaming franchises and is currently developing the much-anticipated 3D platformer Yooka-Laylee.