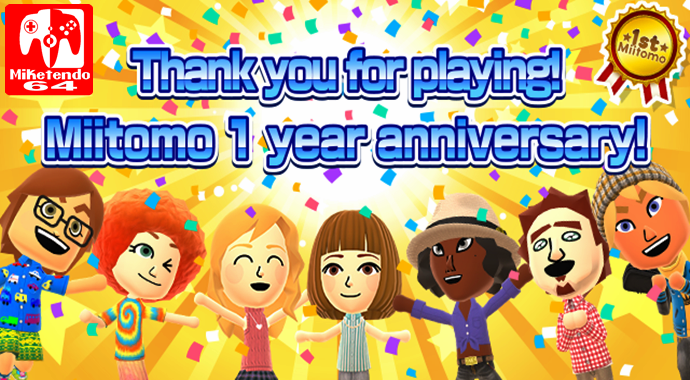 Just like avlongman9 said when she posted the Miitomo instalment of The Miketendo Strip, this is the month where Miitomo celebrates its first anniversary and now the event to do just that, is underway this moment!

So just what exactly can we expect from Miitomo during this time, quite a bit as it turns out, as the new event gives 8 reasons to play and we’ll be covering them all starting now. First up, during the event which runs from now (30th of March, at 12:00 p.m. PT) until 12:00 p.m. PT on the 30th of April, players of the free to download app can expect to lay their hands on the following items, as part of a sign-in bonus:

*While it is not necessary to log in every single day of the event, players will need to make sure they at least sign in on 8 different days during the event to get every item.

Secondly new Miitomo Drop! stages have been added, which consists of items of clothing we have of course seen before, but now they come in a whole range of colours, such as the Gothic lady gown now being available in pink, which you can see below, along with various other items:

*Miitomo Drop! does require Game Tickets or Miitomo Coins to play, so if you don’t have one, you can of course use the other. But should you be out of both, you can either spend your Platinum Points to purchase more tickets or use some real world money, to buy some digital currency.

Although there are more Miitomo Drop! stages on their way, as 4 previous stages are set to return this month, but they are coin exclusive, so if you’re hoping to play them, you will need the cash to spare and no, there are no candy consolation prizes. Here’s a detailed list as to when each stage become available, how long it will stick around and the names of the stages you can expect to see once more:

“I do! Wedding Bliss”

Then there are new items that can be brought from the shop and if you choose the Tuxedo set, just know you can only buy it in one colour, whereas selecting each item separately will allow you to change the colour of it prior to purchasing and the items in question can be seen here:

Next up, have you ever wanted to design an attire of your choosing that you wish you could use in Miitomo and make your Mii wear it? Well the chance to do that has come and you can read all about it, in the image below:

And because that’s still not enough, there will also be an “A Year in Miifotos Mosaic.” This is Miitomo’s way of capturing things that went on in its first year and there will a call for submissions, but it’s not happening right now and more detailed information is said to come on the 6th of April at 07:00 a.m. PT and there’s also going to be a Style Central Event as well. Essentially the Miitomo admin team are scouring the Style Central “for the latest and greatest outfits in the Miitomo app! The team will select their favorites and share them with the Miitomo community via in-app notifications!” More news on this comes on the 7th of April at 07:00 a.m. PT.

Lastly, there will also be Anniversary Answers, which is an event where all anniversary answers and questions will appear in the Question of the Day and Everybody Answers. This particular event is said to run from the 12:00 a.m. PT on the 31st of March, until 11:59 p.m. PT on the 24th of April.

Even if you aren’t a fan of Miitomo, with so much going on, now is as good a time as any to give Miitomo another chance, or to just give it a first chance. I know I’ll be checking it out for myself, will you?