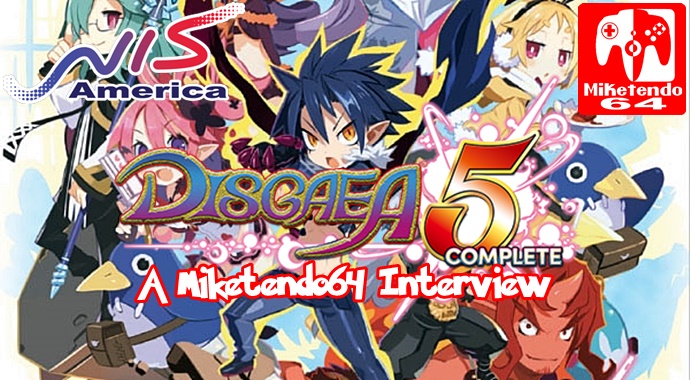 Disgaea 5 Complete may not be a launch title on Switch in Europe and North America, but it is coming to the West in May. So eager to know a little more about the forthcoming title and the localisation process behind it, we reached out to NIS America and were given the chance to ask some Toshi Beppu some quick fire questions and now that we’ve kept you waiting long enough, this is everything he had to say about the upcoming title:

Hi Toshi, thank you for taking the time to do this. Would you mind starting things off by introducing yourself and telling our readers what is your position at NIS America?

Toshi Beppu: My name is Toshi Beppu and I am the Localization Director at NIS America. I haven’t done too much translation lately but I did translate other Disgaeas such as Disgaea 3: Absence of Detention, Disgaea 4: Promise Revisited, and Disgaea D2.

The Disgaea Series in a Nut Shell:

Miketendo64: For our readers who might have never heard of Disgaea 5, or even heard of the series, would you mind educating us in both?

Toshi Beppu: The Disgaea series is probably the wackiest SRPG series in existence. The games feature the most colourful personalities combined with the most unique and wackiest battle system for an SRPG. Think Fire Emblem or Final Fantasy Tactics, but with a comedic anime cast. In terms of battle systems, you can do things like turning your monster-type characters into weapons, or creating a humanoid/monster tower with your whole team, dealing millions of damage with one attack, and most importantly throwing explosive penguins at your enemies.

Disgaea 5 is the most recent release in the series. It’s the most powerful and prettiest Disgaea to date. (Original Disgaea was on PS2 so I hope you can imagine what I mean by pretty). If you are one of those people that prefer playing a series from the beginning…we recently released Disgaea 1 PC on the Steam platform, so please check that out. If you prefer to play the newest version of a game, Disgaea 5 Complete is the way to go.

Version Differences? There aren’t Any!:

Miketendo64: Other than being localised, how does the NA and European version of Disgaea compare against the Japanese version of the game that will release as a launch title for the Nintendo Switch and the PS4 version?

Toshi Beppu: Pretty much identical, except with different language options.

Both are complete versions of their respective releases and feature all the DLCs that we released on the PS4 versions.

Miketendo64: When it comes to localising a game like Disgaea 5, or any game, what exactly is involved?

Toshi Beppu: For the actual localization part I’m not going to go too much in detail but…

Miketendo64: Is there anything else you would like our audience to know about your upcoming game?

Miketendo64: Since you are a publisher bringing the game to the Nintendo Switch, after having brought games to the PS4, how does the process compare? Easier, harder, or just very different?

Toshi Beppu: I would say that the main difference is the actual submission process.

Miketendo64: Other than Disgaea 5 Complete, does NIS America have any other planned titles for the Nintendo Switch?

Miketendo64: Second to last question, and because I mentioned Switch, have you caught the Switch hype bug and what games are you most looking forwards to?

Toshi Beppu: Personally I am really looking forward to the Switch. I’m always enamoured by how light and powerful it is. Also it’s very beautiful, it’s a work of art.

It is really hard for me to pinpoint what game I am looking forward to because at the moment I’m just really in love with the Switch itself.

I will say this, I like playing JRPGs/SRPGs, though.

Toshi Beppu: Please continue to support us so we can continue to bring Japanese titles to the west!

Toshi, it may have been both quick and brief, but thank you for being able to take the time to answer that short list of questions!