[Interview] A Game That Stands out from the Crowd! (Has-Been Heroes) 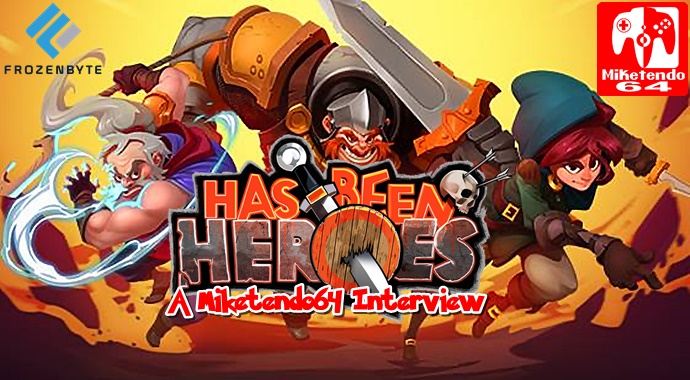 While some large third party developers are bringing a ton of support to the Nintendo Switch, a lot of smaller developers are as well, and one such developer is of course Frozenyyte. In 2015 the Finnish developers brought us Trine 3: The Artifacts of Power and in 2017, they’re bringing us Has-Been Heroes. Filled with a desire to know more about the game, we reached out to the developers last month and now we’re ready to reveal what Kai Tuovinen had to say about the upcoming title:

Hi Kai, thank you for taking the time to do this. Would you mind starting things off by introducing yourself and telling us about your role within Frozenbyte?

Kai Tuovinen: My name is Kai Tuovinen – I’m the marketing manager at Frozenbyte. My main involvement with Has-Been Heroes is working on the promotional side of things.

Frozenbyte is a game developer from Helsinki, Finland, founded back in 2001. We’re focused on PC and console games, and are most well-known for the Trine and Shadowgrounds series.

Right now we are developing Has-Been Heroes in partnership with Gametrust, and are set to launch it on Nintendo Switch, PC, PS4 and Xbox One on the 28th of March.

Has-Been Heroes in a Nut Shell:

Miketendo64: Now, there’s no doubt Has-Been Heroes is a game that will get us thinking, and delighting us at the same time, but for our readers who are unaware, just what is Has-Been Heroes?

Kai Tuovinen: Has-Been Heroes is a perfect blend of rogue-like strategy and action with a few unexpected twists and turns along the way. A band of heroes are on a quest to escort the King’s twin princesses to a faraway Academy, but the road is long and fraught with peril!

While the player controls three characters during the journey, they must focus on coordinating attacks, managing cooldowns and combining hundreds of different spells to create devastating combo effects in order to defeat a horde incoming enemies in their path!

Miketendo64: Has-Been Heroes may not have been seen during the Nintendo Switch Presentation, but last month you guys were at Nintendo NY and got to talk about your upcoming Switch title, during the Nintendo Treehouse stream. What did you make of the event, of fan reaction from the gathered press, but most importantly, what was your favourite moment that day?

Kai Tuovinen: We have been thrilled with the reaction to the game – Has-Been Heroes has a unique visual look and the gameplay is very challenging in a good way, and we are glad to see that others like the game.

My favorite moment of fan reactions is every time I see the ‘click’ in people’s minds – the moment they start understanding the mechanics of the game and the real action begins!

Miketendo64: Has-Been Heroes is an indie title that is confirmed for a Nintendo Switch release, among other platforms. How does it feel to be one of the first indie companies to have a game on Switch during launch month?

Kai Tuovinen: We are thrilled Has-Been Heroes will be a title available around launch on Nintendo Switch and to introduce Nintendo fans to the game. It feels good to be a part of a new Nintendo system launch again!

Miketendo64: And since we’re talking Switch, given what the new console can do compared to other platforms, will the final version of Has-Been Heroes take advantage of the Switch’s added capabilities, or will it simply be the same game, no matter what platform the title is on?

Kai Tuovinen: The game takes advantage of many of the unique features of Nintendo Switch – from the controller’s innovative HD Rumble to the ability to seamlessly go from console to portable to harnesses the non-stop adventure.

Has-Been Heroes vs Breath of the Wild:

Miketendo64: Nintendo Switch may not have the power-house line up gamers wanted, but it still has Zelda and Super Bomberman R. How do you think Has-Been Heroes will do in terms of sales, when it’s up against competition such as that?

Kai Tuovinen: We believe fans of rogue-like strategy/action games will love this game, as well as gamers looking for something new to try. The randomness of spells and items allows for thousands of new experiences and will force players to continuously change their playstyle – it’s a challenging, strategic game with a ton of content that is very different from everything else.

Miketendo64: Developing games is never easy, no matter how much experience you have in the industry, so what are your highs and lows during Has-Been Heroes development?

Kai Tuovinen: Each project is always a little different. For Has-Been Heroes we had a team-first approach and the kind of genre we wanted to focus on – rogue-like, and we built a number of prototypes. After a few tries we knew we had something when the team was hooked on the mechanics. We’ve been building on that ever since, and that feeling has lasted throughout the development and we are still having fun and are challenged with the game!

Miketendo64: So I suppose I should ask at least one somewhat gameplay related question, so here it is. Since it is a game of increasing difficulty, enemies that can inflict permadeath and a whole ton of spells, what are your favourite things about Has-Been Heroes?

Kai Tuovinen: Learning new tricks! There are many secret moves and e.g. spell combos you will learn only by playing the game, and it may take a long time for you to pick up the nuances and timings of some of those moves. It’s always surprising and enlightening when you figure something out for the first time.

No Spoilers Just Yet:

Miketendo64: When all is said and done with Has-Been Heroes, what comes next for guys? Any other Switch related plans?

Kai Tuovinen: We look forward to supporting Nintendo Switch with future titles as well, but will reveal more info about those at a later date.

Miketendo64: Well at the very least, are there any plans to do a prequel title that focuses on the Warriors’ previous adventures? (One possible title being: Before they were Has-Been Heroes.)

Kai Tuovinen: No plans at the moment, but that idea sounds very cool!

Miketendo64: When all is said and done with Has-Been Heroes, what comes next for guys? Any other Switch related plans?

Kai Tuovinen: Has-Been Heroes will be available March 28 in physical form exclusively at GameStop through its retail channels and website internationally (pre-orders available now!), but will also be available digitally on Nintendo eShop, PSN, Xbox Live, and Steam.

Kai, thank you for making the time to answer our questions, I understand it is an incredibly busy time for you and all your colleagues.