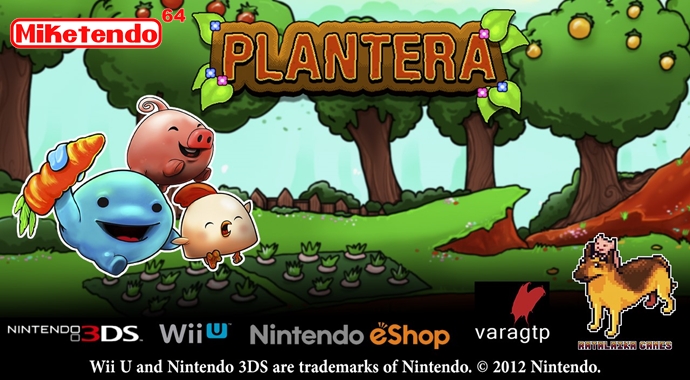 Grow your own Garden with Plantera & Plantera Code Giveaway Details!

For quite some time now it has been known that Ratalaika Games have been working on a Plantera port for both Wii U and 3DS, but up until now, there hasn’t been any news of a release date, until today!

But unlike other Plantera articles you may have seen today, covered by our fellow media sites, we actually received a press release from Ratalaika which offers a description on the game, covers cross-buy and even covers differences between the Nintendo versions and the original Steam version, and you can see it right here:

“Hello, dear press people! We are releasing a new quality indie game for Nintendo 3DS and Wii U very soon: The relaxing cartoony garden sim Plantera by Swedish game developer VaragtP Studios that had great success on PC and mobile.

In Plantera you buy plants, animals and items from a shop and place them in a 2D parallax scrolling garden. With the goods you get from your garden, you can earn more coins and grow a huge farm. Or you can just create your own dream garden.

For our Nintendo versions, we’ve added a lot of features that are loved and expected by the users. Since we implemented full touch screen controls. As for the Wii U version we made it so the TV screen can be used as a mirror of the GamePad for family and friends to watch. The player can also switch to a second TV mode to have all the stats and collectibles available in one place.

We’ve also added an in-game manual and got rid of the microtransactions and advertising from the original game, so players can buy everything with their in-game currency without the need to spend extra real world money. And we still keep the price low to be affordable for everyone (4,99$ / 4,99€). To sweeten the deal, the game will have cross-buy so when players buy one version of the game, they’ll get the other version for free. Furthermore we localized the game to be playable in English, Spanish, German, French, and Russian and implemented a number of little improvements that we think add to the game’s quality.”

And now that we’ve got that bit out of the way, it’s time to talk about our very own Plantera giveaway! If you would like to earn the chance to win 1 of the 10 codes we have for Plantera, then all you have to do is share this article. Retweet it on Twitter, share it on Facebook. Winners will be picked at random. Best of luck everyone, now share this article! Let’s give Plantera the media coverage it deserves!

All codes will be sent out to winners on the 9th of February out of fairness to those buying it on release day.
Source: Ratalaika Games