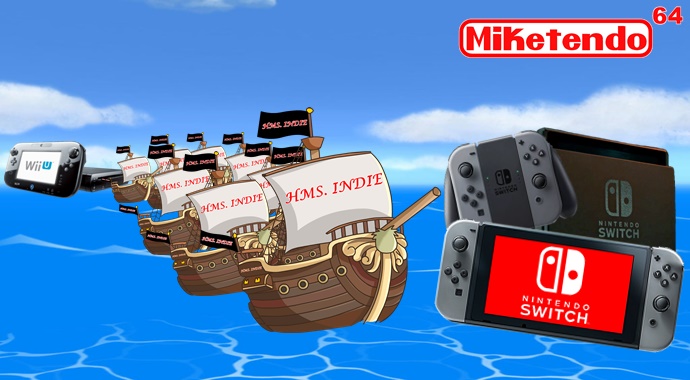 Indie Devs! Don’t Set Sail for the Switch Just Yet!

If you are an indie dev, then this article is for you and even if you’re not, then you should still consider checking out this all new Editorial.

Let us begin by stating the obvious, the Wii U is dead. It’s a truth that some gamers don’t want to face, but developers can’t waste their time with deluding themselves otherwise. The Wii U isn’t the easiest of consoles to port to and since it is a console that had so little sales, it means indie sales are low too. From a business standpoint, while some developers and publishers did want to bring games to the platform, it just didn’t work out because it is just too cost effective to do so. So it makes sense they should focus on bringing their games to the Switch instead right?Wrong! And here’s why. Even if the Switch sells out upon launch, let’s not pretend that Nintendo have a history of failing to produce enough stock. At best they will have 2 million consoles sold, with the possibility of having 5 million sold in total, by end of March 2018. Should things work out the way I’m theorising it, (i.e. the numbers), then that would mean that come March next year, there will be 5 million potential buyers for indie games on the Nintendo Switch, compared to the 12 million potential buyers Wii U would have. (While the actual number is over 13 million, let’s assume 1 million+ consoles have been sold, destroyed or are broken.)

Straight away you will be trying to be bringing your games to a much smaller audience, much like you were when you were trying to port your games to Wii U, before facing technical difficulties and lower returns (i.e. profits) financially speaking. But here’s the other thing, not every Wii U owner is going to rush out and buy a Switch, some might even wait a year, so while 1.5 of the possible 5 million Switch owners come March 2018, the other 3.5 million will be made up of gamers who own consoles such as PlayStation 4 and Xbox One, which of course means, these gamers could have already played the game you’ve already ported to those consoles, but are now porting to the Switch. So once again that limited market you’ll have on Switch, has decreased even more so.

Also Nintendo Switch, as new and exciting as it is, it is a new barrel of fish and for the indie crowd, it is incredibly tough to get a license for, as Nintendo are being very careful with who they give their devkits out to. Nintendo doesn’t want just any old indie game on their new platform, they want games that will sell. Games that will fit in with the mobile experience the Switch has to offer, but games that will also take advantage of the Joy-Con. If you are a dev and you are considering porting to the Switch, or are already in the process of doing so, then you must make sure you design/port your game with the Switch in mind. So I’ve prepared a few tips to help you guys out:

While that does conclude my tips, I do have another point to make. That limited audience I mentioned earlier, you’ll have on Switch, just how many do you think will buy your games, when Nintendo have a plethora of first party games to come to it this year alone, with third party support of similar quality also releasing through-out the year? It doesn’t matter if your game is cheaper than the big games, it is no guarantee they will sell. Only those interested in the games and indie fans will buy your games, meaning if you’re cancelling your planned Wii U games because you’ll find success elsewhere, I’m sorry but you’re solely mistaken as you will face even tougher competition on the Switch, despite the fact there will be less indie games to compete against.

In no way am I attempting to discourage you from going the Nintendo Switch route, but as companies who need to make financial decisions on everything you do videogame-wise, surely you can see that the Nintendo Switch is the be-all-end all, but there is an alternative. Difficulties aside, there is no reason at all to cancel your Wii U support, because with the console being dead and no new games coming to it, first or third party wise, it would mean anyone who owns a Wii U looking to buy a new game, would actually be more likely to buy your game.

The majority of the competition would be gone and while you wouldn’t have to bring every game you develop/publisher or even port to it, as you can be selective with it if you want to be. Only bring your better titles to it, as that would ensure even more sales than your lesser games would get and reduce financial costs to yourself, but also it will give you a way of selling to a larger Nintendo home console market.

This is by no means something you’ll have to do for the rest of your lives, as you can easily end your Wii U support after a year or two, but don’t be foolish and put all your eggs in the Nintendo Switch basket, because unless you take full advantage of the console, you will come up short a few eggs of a 6 pack egg box. Don’t abandon the Wii U just yet, even if it is hard to develop for, developing/porting to both the Wii U and the Nintendo Switch will pay off more than just focusing on Switch would. Also, come the financial reports, you might just find out that during the first year that the Wii U version far outperforms the Switch version.

Just food for thought, but at the end of the day, you guys are the ones who make games, and I’m just one of the many people who play and write about them. You have got to do what you’ve got to do, regardless of what others think.

Till next time, keep on gaming! (And Developing.)