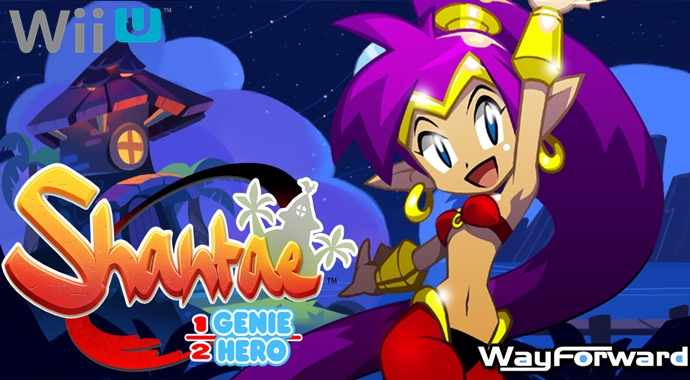 At the time of posting this, Shantae: Half-Genie Hero has now been out for four days and it has completely blown me away!

If Shantae was a Zelda game, it would be Breath of the Wild, what with boasting incredible graphics that has dragged the once retro only series, kicking and screaming into the 21st century. But it’s not just the palette and improved graphics that make Shantae stand out, but the soundtrack, the writing and even the feel of the game. I have played every game in the series and I have seen it changed and Half-Genie Hero, is easily the best instalment.  So right off the bat, it gets high praise from me, but just why is the music so good, maybe because the opening hits you like a solid right hook and as soon as you hear the lyrics sung by Christina Vee, it is incredible hard to not be hyped, or feel uplifted. But then there is the heroine to the game itself! Shantae is back to being Shantae, the Half-Genie we know her to be, playful and ready to put her powers to use once more!

Yes that’s right, the transformations are back and there are so many of them. Feel like taking to the sky and flying, there’s a Harpy transformation that will let you do just that. Want to blow bubbles and swim freely through the waters of Sequin Land? Then the Mermaid transformation is for you! Or you can shrink down to the size as a mouse, thanks to a Mouse transformation. Half-Genie Hero has a whole load of transformations just waiting to be discovered and dances to be learned and sure not every power she can use, is actually used often in the game, there is at least a transformation, or a dance that most of us would use on a regular basis . Shantae’s Genie powers are well and truly back and since I mentioned Genies and powers, let’s talk story.

Half-Genie begins with Shantae waking up in the middle of the night, disturbed by an unknown presence. She follows it outside her home and into Scuttle Town, where she then goes into her uncle’s workshop, but nothing is as it seems. In fact a secret hatch is open and it leads to a secret area downstairs where a magical presence requires Shantae’s presence. An Agent of Darkness is running amok and if not stopped, both Sequin Land and the entire Genie Realm will met its end. Only thing is, the titular Shantae then wakes up in the middle of town to realise it was just a dream, or was it? But there’s no time to think about it, since Main Street falls under attack and Shantae needs to stop it at once.

Sadly though, despite her efforts, the Mayor is not happy and Shantae is fired and a replacement, is hired and then the game truly begins. As far as actual content goes and this is a big thing for a lot of gamers, no there isn’t an awful lot if I’m honest. As far as a Shantae game goes, there is more to the game, but it is easy to 100% complete your first play-through within 6-10 hours. However, for this gamer who adores Jotun, another game that can be 100% completed within a 7 hour period, length isn’t everything, as this gamer prefers quality over quantity, so while this Shantae instalment may lack quantity, it is packed with quality gameplay, and a Hero Mode and another playable campaign that isn’t currently available.

Now if there was one thing gamers remember about the first game, it most likely would be its difficulty, well Half-Genie, despite being a little tough in the beginning, it is a very easy game. Maybe even a little too easy. The fetch quests are simpler compared to some seen in previous titles and on the off-chance you find yourself coming unstuck, unable to locate a certain item, you can always get a hint or two from NPC’s in Scuttle Town. Also, as with any Shantae title, Shantae can power up her attack damage and improve her various powers, and as far as Half-Genie Hero is concerned, it is all too easy to gather the required number of gems to purchase everything and become an ultimate powerhouse when you’re only halfway through the game.

But hey, the soundtrack is absolutely fantastic and the game has a much more fluid feel, even if there are only six actual levels for us to truly enjoy, with Scuttle Town acting as a hub world, but unlike previous Shantae titles, it has a gigantic Wrench who will fly Shantae to where it is she needs to go, and an art gallery that is jam-packed with fan art and concept pertaining to Half-Genie Hero, only if you wish to check out each and every piece, you’ll need to find the 10 keys that open the ten doors inside the art gallery. But the best thing I’d have to say about the game, it would have to be Risky Boots return to being wicked and Squid Baron being the villain we love him to be. He was too nice in Pirate’s Curse, so it’s great to see him get the true return he deserves and while the action and fighting may be pretty similar to what we’ve seen from previous titles, not only has it never looked better, but some of the boss battles are truly spectacular, although I was disappointed with the final battle if I’m honest.

Now as for GamePad screen vs TV screen, Half-Genie although it looks pretty enough on the actual GamePad, I spent more time playing it with the TV on and the Pro Controller in my hands. Half-Genie Hero is the kind of game you play when the only light in the room is coming from the TV screen as it pumps out the game’s soundtrack to a volume setting you’ve set pretty high. It’s a game to immerse yourself into completely  and the GamePad only experience, fails to capture that very essence and because I can feel myself gearing up to prattle on for far longer than I need to, I think it’s time I brought this review to an end.

So to summarise, yes it’s short, but the content is golden, the graphics are beautiful and Jake Kaufman is a musical maestro, because the soundtrack for this one is the best and it is very and not to like Dance Through the Danger. WayForward put a lot of time and effort into this game, and it has paid off, only they’re not finished because they are currently working hard to add more to the game, but this is without a doubt the best Shantae game ever. However it is an easy game, and while it will attract a great number of gamers, not all of them will be able to sit there and play the previous titles, and there will be things about this instalment that some gamers won’t like either, but not this gamer. I love Half-Genie Hero and I’m going to be playing it for quite some time and that is why I can’t help to score it a 9/10 because it is that good and should you be a gamer undecided as to whether or not you should buy this game, than my advice to you is watch some YouTube videos, watch some more videos and then make a decision, because only you can decide if it is a game for you or not. But yes, Half-Genie Hero is the Breath of the Wild of the Shantae series and it truly deserves a 9/10!