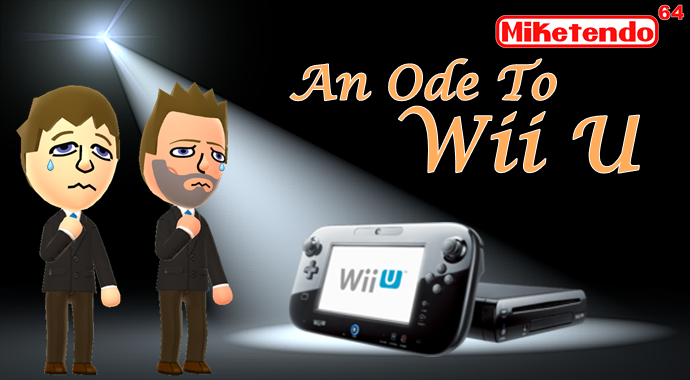 An Ode to Wii U Series Announcement

With the Nintendo Switch revealed and interest in the Wii U waning, there’s no denying the fact that the Wii U is on its last legs, but that doesn’t mean the console isn’t loved!

Mike Scorprio and I love our Wii U’s and it is one of our more favourite consoles we’ve ever played, so with 2016 close nearing its end and the Wii U era doing the same, we thought we would reach out to a number of indie developers and see what they thought of the Wii U and boy did we get some responses. We were originally considering doing just a single post in New Year’s Eve that encompasses many of the responses, but because of the content we’re getting, we’re still going to do that huge feature piece, but from now and till then, we’re launching a new series of interview posts.

The series is “An Ode to Wii U” and each article will contain the full responses of everyone we heard back from and as a special treat to kick the series off, we will be sharing two pieces later on today! We sure do like to spoil you, so here’s a taste of what you can expect from our news series:

*Extract taken from our upcoming An Ode to Wii U From Wraith Games Interview:

Jay Kidd: “I love it, and to be honest, most of the rest of our team does as well. I often tell a story about how when I first saw the DS and Wii shortly after each of their announcements, I was incredulous (at best) about them, to the point where I didn’t pick either of them up until about a year after they released… where I then fell in love. I started to with the 3DS as well, but ended up picking it up about 3 months after launch; but when I felt that same sense creeping up on me about the Wii U, I actively told myself to “stop it”! I picked one up on day 1 and never looked back. I love the thing. Despite its flaws (and there really are some).

For starters, I really think the name shot it in the foot pretty early on. There were ads, Toys R Us was a big one that advertised the GamePad as if it was an expansion for the Wii (even picturing it with a Wii rather than a Wii U) that didn’t help. Even if they wanted to stick with the “Wii” part of the name, I remember seeing a Japanese commercial calling it the “Super Wii” (to help explain what it was in comparison to the Wii) and all I thought was: “Hey! Why aren’t they calling it that!?”

The understocking was another big problem. We saw that again with Amiibo and NES Classic. Not good! There was also the issue with system-based purchases (as opposed to account-based) in the beginning. The whole roll-out was a mess!

A lot of people talked about how it never seemed like there were enough good games for the system, and I’d have to disagree with that. There’s also this talk from fans, not the developers themselves, about how “hard it was to develop for”. Both just simply aren’t true. They also talk about the power of the console, though if you look through all the past generations, the weakest console tends to sell the best.

If we’re being honest, none of that mattered. Once the image problems started, the system was doomed. It never really mattered how true those latter complaints were, it was all about perception. When Nintendo started doing all of that YouTube and fangame take-down nonsense that was the final nail in the coffin as far as many gamers were concerned.”

For more from Jay, make sure you read the full An Ode to Wii U From Wraith Games interview piece, it will be posted within the hour.

Tags: An Ode to Wii U, Interview, Jay Kidd, Wii U, Wraith Games