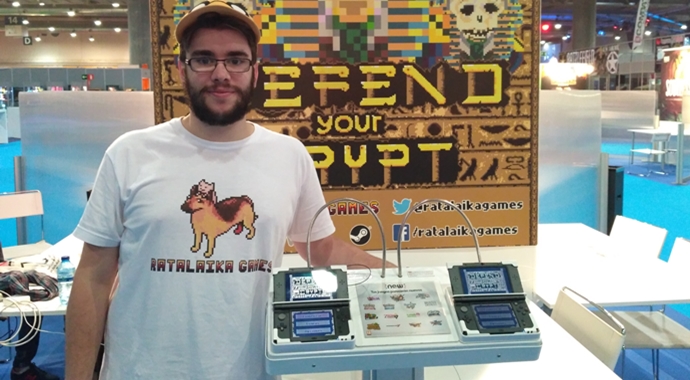 Over on our part of the world, Madrid Gaming Experience has come and it has gone and sadly, we were unable to attend the new gaming event in Spain.

But that’s okay, because we know someone who did, Adrien Vega of Ratalaika Games and he has prepared a little something for us to share regarding the event, so I’m going to shut it and let Adrian take over:

We are back from Madrid Gaming Experience, a Spanish Video Game Expo. We were there 4 days non-stop and had our own booth!

First, let’s talk about the Expo in general. It had two big halls. One hall, “Hall 12” was dedicated to AAA companies (like Microsoft and Sony) and E.S.L. (Electronic Sports League), and the other one, “Hall 14” was dedicated to retro and indie games. In the AAA-hall were many virtual reality games to try. The fact this area was so huge made it easier to try some. I played one and ended up dizzy hehe!

One of our favourite zones was the Retro Zone with its pinball machines, PlayStation 1 and other consoles. In this zone there were always people playing something. During one of my visits to the Retro Zone, I played on a Bram Stoker’s Dracula pinball machine and I liked it a lot.

We brought League of Evil, Defend your Crypt, and Blasting Agent – Ultimate Edition to the Indie Zone!

Our games were successful and there were even people that came twice to play! And we were on the receiving end of a number of interviews, which we hope you will be able to hear soon. We really enjoyed our interview with Espal3DS a lot. They came with EspalTino! And we took some pictures with him! You can watch the interview here:

As with any gaming event, cosplayers and the talks were also present and although we couldn’t attend every talk, the ones we did attended were worth it!

Sounds like the Miketendo64 team missed out on something fun! Shame, but there’s always next year. Big thanks to Adrian for his words and his photos.