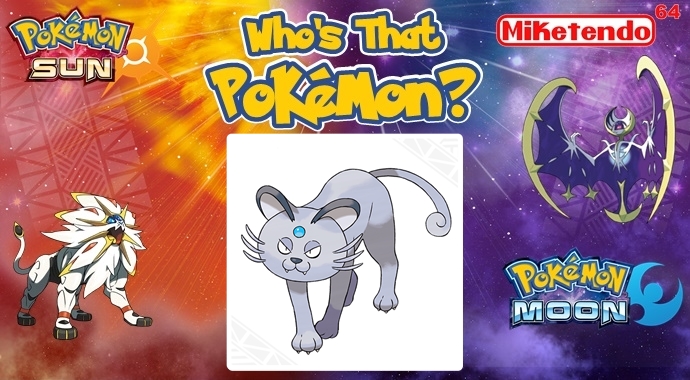 Welcome back to Who’s That Pokémon? the feature series regarding the Pokémon we can expect to see in the upcoming games. From Rowlet to Tapu Koko, and Drampa to Silvally, we have covered them all, but now we have another batch of eight Pokémon to cover, so get ready for another instalment of Who’s That Pokémon? We dedicate this edition to Alolan Meowth’s evolved form, Alolan Persian!

Description: “The round face of Alolan Persian is a symbol of the rich Alola region, and it is held to be a Pokémon of great beauty. It is such a distinctive Pokémon of the Alola region that all Persian are well protected, and strict inspections are required before tourists can be permitted to take one back to their home region.

Persian is highly intelligent, with an even higher opinion of itself. In general, it looks down on everything other than itself. It doesn’t tend to grow attached to its Trainer, either, so it’s a difficult Pokémon to have as a partner in battle.

Its exquisite coat shines with the glow of high quality and enchants both humans and Pokémon. For this reason, it is a very popular Pokémon in the Alola region.

It usually puts on a refined act, but once a battle begins, it will indulge in the most underhanded of tactics, including surprise attacks, trickery, and even foul play. Yet its haughty personality causes it to underestimate its opponents, and it’s often taken in by their counterattacks.


Categorised in: Pokémon Sun & Moon, Who's That Pokémon?