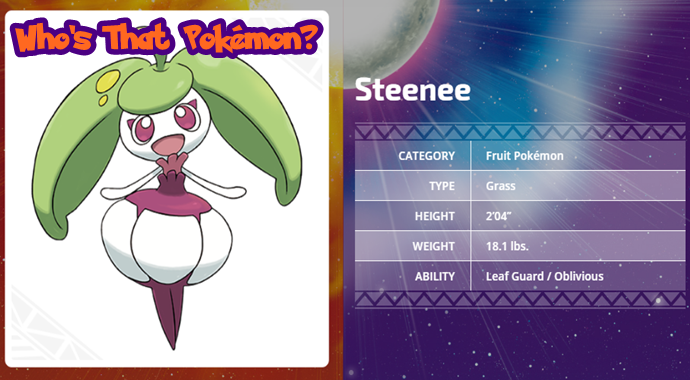 Welcome back to Who’s That Pokémon? the feature series regarding the Pokémon we can expect to see in the upcoming games. From Rowlet to Tapu Koko, and Drampa to Ash-Greninja, we have covered them all, but now we have another eight Pokémon to cover, so get ready for another instalment of Who’s That Pokémon? We dedicate this edition to Bounsweet’s evolved form, Steenee!

Description: “The calyx on Steenee’s head is harder than Bounsweet’s, so Steenee no longer worries about being stabbed by other Pokémon. As Bounsweet, this Pokémon may have preferred to run away from others, but now Steenee and other Pokémon can play together.

Upon evolving, this Pokémon’s fragrance becomes even more delectable, but it also gains a tomboy-like personality. Living together with one is quite the ordeal. As it moves around, it spins its calyx, striking nearby objects, but Steenee couldn’t care less.