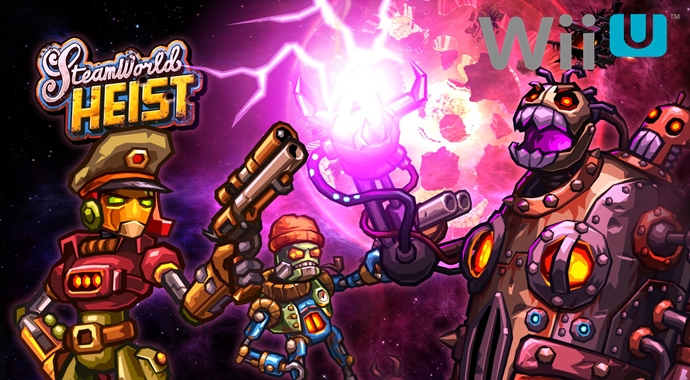 SteamWorld Heist on the Wii U (The Jacktendo Review)

My name is Jack Longman and this is The Jacketendo Review, the two-in-one game review that caters to all kind of readers as it consists of both a fast and a short review and a slow and long one. Undergoing The Jacktendo Review today is the brilliant turn-based strategy, action shooter, SteamWorld Heist for the Wii U.

SteamWorld Heist in a Nutshell: (The Speedy Review)

Thanks to the wonderful Image & Form, SteamWorld Heist is now playable of the Wii U and it is just great! I have never been a fan of turn-based games, played them, but never liked them, but I just loved this one. With the HD graphics, the colours and chosen style, Heist doesn’t just play great, but it looks great too.

It’s got music that belongs, characters who will make you laugh, references to look out for, and so many hats! I told myself when I started I wasn’t really going to focus on them, but then I started collecting them, and putting them on my characters and now I can’t stop, I need more! Then again that is this game in a nutshell. Sure the story may not be the greatest one in the world, but it is more than decent and the game is addictive. How addictive might you ask? 8 hours addictive. By that I mean I sat down yesterday to play it and when I finally turned the Wii U off, more than eight hours had passed. It’s just that good!

It’s also real easy to follow, the Wii U GamePad with the map screen is a godsend and there are so many robots you can recruit to take into battle with you. Regardless of whether or not you have played it before, you have not played it on the Wii U and that is a must experience because SteamWorld Heist on the Wii U is pretty fantastic and I just can’t get enough of it. It has too many great qualities to list in such a short review, so I’m not going to try. I can do that in the lengthy one, but yes I love Heist, and it is a game I would recommend to whoever listens to me!

Oh yeah, the moment I have been waiting for has come, the moment I can talk about how much I enjoy SteamWorld Heist without having to worry about a word count. Oh what sweet joy awaits!

So what is SteamWorld Heist? SteamWorld Heist is Image & Form’s latest entry in the SteamWorld series. Yes it initially released last year on the 3DS and has since taken its time getting to the Wii U, but for any Nintendo fan who owns a Wii U and has waited for what feels like forever for the game to come to the Wii U, the wait is worth it as SteamWorld Heist has never looked better. High Definition? Check! But how’s the story? Sure we’ve had 10 months to learn it off by heart, but there are plenty of us out there who are learning it for the first time so here it is. SteamWorld Heist is a side-scrolling turn based, shooter strategy game, which is a follow-up to SteamWorld Dig. Sure there’s a gap of about a few hundred years and that the Steambots have changed a great deal, what with becoming more intelligent and have made it into space, but it’s still a sequel! A sequel that follows the exploits of one Piper Faraday, a Space Pirate who knows her way around a firearm!

Piper is a ready to rumble Cowbot, who leads a dastardly crew, only she doesn’t exactly have the best of luck, what with the game starting with her in trouble as her latest heist sees only her crew taken from her and Piper having to make good her escape as Scrappers. The ensuing level then plays out as a tutorial, teaching us gamers the basics as Piper shoots her way across the level and eventually coming face to face with the last surviving crew member from the boarding party. With it being the first level, of course Piper and Gabriel Seabrass are going to make it out okay, but out of the frying pan into the fire. No sooner do they make it out okay, only to realise just how bad things are in the Outskirts. Scrappers are everywhere and they’re causing all kinds of havoc for the locals.

In a lot of ways, SteamWorld Heist is something of a redemption story, but it’s the good kind of redemption story because instead of a protagonist who has done bad and now wishes to amend the things they did, it’s the kind of story that forces the protagonist to use the skills they’ve picked up from their chosen lifestyle to do good when a worse threat looms, but it doesn’t just stop with the Scrappers, but there’s Royalists and even Vectrons to deal with as well. Heist certainly comes packed with hours and hours of content and even after you have seen off every threat, there’s a New Game+ mode that will let you keep all the hates you completed and the crew you’ve gone on to acquire and go through the whole thing again, but we can talk more on this in a bit, because right now I want to talk about the music.

SteamWorld Heist comes with its very own soundtrack, (Music From SteamWorld Heist,) composed and recorded by Steam Powered Giraffe, a steampunk band who actually appear in the game as Steambots you can encounter at Space Bars throughout the game, where they will actually play songs from the soundtrack. Now I’ve never been one in the whole steampunk scene. Or the western scene. Or even the folk music scene, but that did not stop me from enjoying every single track. In fact I’m actually surprised by how much I enjoyed this game, as usually when I play something like this, I walk away a little too eager to immediately play something else, but Heist just has me hooked. When I walk away, I walk away wanting to play it again, wanting to get some more hats and wanting to pull of some more tricky shots.

So yes SteamWorld boasts a vast enough world, one which can be extended upon thanks to The Outsider dlc pack, an intriguing story that draws you in and some good music as well, but wait, we haven’t covered the real action yet, the shoot-outs! Being as so Heist is a turn based game, it of course means when playing through levels, you and the opposing force take it in turns moving your bots, except where the computer moves the resistance to advance upon you and lay waste to your Cowbots, you have to do more than that. There is plenty of swag to collect on each level and collect it all really does pay off, especially the levels where the objective requires you to collect a lot of it, so not only do you need to move your crew through opposing ships, but you’ve got to try and take them out whenever you can, complete certain objectives and collect the all-important swag, as swag and completing each level helps raise your reputation. There’s also fact that swag enables you to get new weapons of varying rarity, gallons of water that enables you to buy new items and guns and even valuable objects that can be sold on. Very exciting stuff indeed!

The true excitement however is in how you play each level for there is an almost endless way you can play each one. As you progress through the game you can recruit more and more crew members, each with their own abilities, skills and appropriate weapons, which means each new crew member brings something new to the table and if you can’t complete a certain level with the team you adore, a new member could make all the difference, or a different advancement strategy instead. But if you still struggle to complete some of the harder levels, well there are five difficulty settings, so simply take it down a notch and as for taking out the opposition, regardless of how you choose to take them out, remember to have fun as you do it. When using weapons with a scope attached, you can do all kinds of ricochet trick shots and they are perfect for shooting hats off your enemy’s bonce, and it’s rather funny too, just remember they will do it to you too if they get the chance. But yes, make sure you have fun when you play this game, because it may get hard, but it is funny, the bots are humorous, and there is nothing quite like pulling off an excellent trick shot and seeing an enemy be reduced to nuts and bolts in slow motion. This game is pure brilliance and everything about it just adds to the experience, especially the hats.

Sure you could argue the hats don’t really serve a purpose but you would be wrong. Just because they don’t really serve an in-game function of boosting stats (melee, health, movement) but they are a joy to collect and there really are plenty of them to be discovered and they make all the difference in battle, as Piper went from having a cowboy styled hat, to looking like a true pirate thanks to a certain black and white pirate’s hat. (Seabrass however ended up being equipped with the traffic cone and that was indeed a brilliant sight, so if you haven’t yet, make sure you do it as soon as you get the opportunity.) More importantly, they hats are very fun to acquire and although you could say they aren’t all that important to the game’s story, or to the game, but that’s really not the case. The hats are more important than you realise, and do add a lot to the game, so if you want to play Heist properly, you will have to collect them all! But yes, this game is brilliant, everything about it is marvellous and it does a great way of complimenting itself. I really can’t stress that enough.

Just like I can’t stress enough the fact that I can honestly say that if it wasn’t for the fact that I already intend to purchase SteamWorld Collection, playing through Heist has made me want to get it even more. Heist is incredible and sure I can pay for the Outsider dlc for the digital version I have now, but after having played Heist, I now need to play SteamWorld Dig in glorious HD. Sure the two differ in genre, but I don’t care about that. I want more Steambots and I want them on my Wii U. Besides what kind of a writer for a Nintendo news site would I be if I didn’t own at least 1 of the new Nintendo eShop Selects titles? The game is great, and it is something I can see myself playing fairly regularly over the coming months and that is why SteamWorld Heist on the Wii U scores an impressive 9/10! It is a game that has to be played, needs to be played, because if you don’t, than you are really missing out on something good and I have truly let my excitement dominate this entire review!