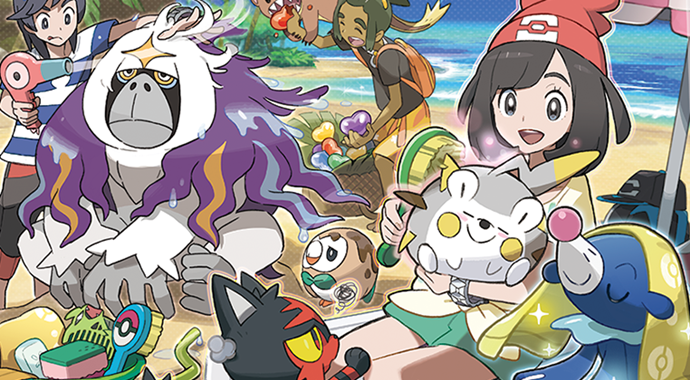 From Z-Moves to New Pokémon, Today’s Sun & Moon Reveal Has a Lot of Exclusives

It’s September the 20th which means it’s the day we got to learn more about Pokémon Sun and Moon and this time the new footage and news concerns exclusives, starting with version exclusive Pokémon.

Exclusive to Pokémon Sun is Passimian, the Fighting-type Teamwork Pokémon and knows the ability Receiver, which essentially allows it to take on the ability of its Partner Pokémon, if the Partner Pokémon faints during battle and since Sun gets that bad boy, it’s only fair that Pokémon Moon gets a version exclusive of its own. The exclusive is the Normal/Psychic-type Oranguru. Oranguru’s revealed abilities consist of Inner Focus and Telepathy. They can also learn a new move called Instruct. Instruct causes the targeted Pokémon to repeat their previous move, instantly.

Next Pokémon we got a good look at is Lycanroc, the evolved form of Rockruff. Lycanroc is a Rock-type. If playing Pokémon Sun, Solgaleo’s influence will cause Rockruff to evolve into Lycanroc’s Midday Form. Midday Lycanroc known abilities consist of Keen Eye and Sand Rush. Midday Lycanroc can learn the move Accelerock and stands on all four paws. In Pokémon Moon however, under Lunala’s influence, Rockruff evolves into the Midnight Form of Lycanroc. Unlike the Midday Lycanroc, Midnight prefers to stand on two feet, currently has no known moves, but it’s known abilities consist of Keen Eye and Vital Spirit.

Just as soon as Lycanroc had all his allotted time in the new footage, next came character customisations. Not only can we change clothes, swapping shorts for trousers, but we can alter the length and colour of our hair, change the colour of our eyes and more. The only thing is, these customisations come at a price, they require Festival Coins, but there was no mention as to how to collect them.

Next up, replacing the old Pokémon Amie, is Pokémon Refresh. A new functions that will allow you to brush dirt from your Pokémon, pet them, cure their poisoning, cure their paralysis or just feed them Poké Beans. Here’s the official information:

“Use the Pokémon Refresh feature to care for your Pokémon. After a battle, Pokémon sometimes end up all dirty. When that happens, you can take care of them and get them all cleaned up. By caring for your Pokémon, you can also cure status conditions like poisoning and paralysis that were inflicted on your Pokémon in battle.

Pokémon that have grown very affectionate, thanks to petting them a lot and feeding them their beloved Poké Beans, will battle to the utmost for you. Sometimes they’ll avoid attacks from opposing Pokémon—and even hold out when they’re on the verge of fainting. Take good care of your Pokémon with Pokémon Refresh, and they’ll be great allies on your adventure!”

Lastly, as for the final exclusives revealed during the news drop, it seems Snorlax and Raichu aren’t the only Pokémon who know an exclusive Z-Move, as both Pikachu and Eevee have a Z-Move of their own. For Pikachu it is Catastropika, “superpowered attack move where Pikachu borrows its Trainer’s strength, wrapping itself in extra-high-voltage electric power, and charging into its opponent. This will become Pikachu’s most powerful attack!”

Eevee’s move however is Extreme Evoboost, “Extreme Evoboost, gathers together Sylveon, Jolteon, and more—all of the eight Pokémon that Eevee can evolve into—and grants their power to Eevee. This powerful move raises Eevee’s Attack, Defense, Sp. Atk, Sp. Def, and Speed by 2.”

Now while that consists of all the news revealed in the English trailer, the official site offers some new news regarding the Pokémon Bank and Pokémon Transporter and we have all those details right here:

Bring in Pokémon from Past Adventures:

“In January 2017, the Nintendo 3DS downloadable software Pokémon Bank is expected to receive an update for compatibility with Pokémon Sun and Pokémon Moon. Pokémon Bank is an application that enables you to put Pokémon you’ve collected in your games into Internet-based storage boxes. Until now this service has been available for Pokémon Omega Ruby, Pokémon Alpha Sapphire, Pokémon X, and Pokémon Y. Starting in early 2017, it will support Pokémon Sun and Pokémon Moon as well.

You can’t deposit Pokémon holding items into Pokémon Bank. If you try to deposit a Pokémon with a held item, that item will be sent back to the original game.”

“Poké Transporter is also being updated for compatibility with the Virtual Console versions of Pokémon Red, Pokémon Blue, and Pokémon Yellow: Special Pikachu Edition. Deposit the Pokémon you’ve collected into Pokémon Bank, and you can send them to Pokémon Sun and Pokémon Moon as well.”

You can’t deposit Pokémon holding items into Pokémon Bank. If you try to deposit a Pokémon with a held item, that item will be sent back to the original game.”

*There’s also going to be a new National Pokédex too:

“When Pokémon Bank is updated to support Pokémon Sun and Pokémon Moon, it will also gain a new Pokédex feature.

The application will read your saved data from any games* you connect with it, collecting information about Pokémon you’ve caught, so you can check it.

Using the Pokédex feature in Pokémon Bank, you’ll be able to see this information—even about Pokémon that don’t appear in the Alola region of Pokémon Sun and Pokémon Moon.*The games that can connect with this Pokédex function are Pokémon Sun, Pokémon Moon, Pokémon Omega Ruby, Pokémon Alpha Sapphire, Pokémon X, and Pokémon Y.”

And now that we’ve got all of that out of there way, here’s both the English and Japanese trailers that were released today:

Here ends our coverage of today’s reveals, for more Pokémon news and information on the recently shown Pokémon, be sure to check back often, especially this weekend as we’ll be putting out another bunch of Who’s That Pokémon? articles. But also, the next Sun & Moon reveal is to take place on October 4th at the following times:

So with another reveal date set, you can be sure to expect to see a lot more Pokémon news and rumours come out in the meantime.