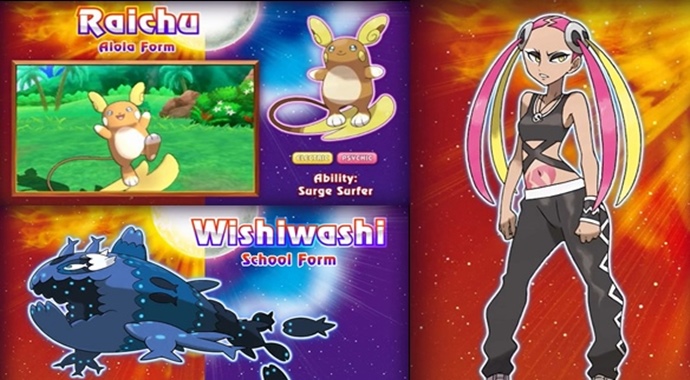 Following all of yesterday’s leaks, tomorrow’s complete reveal has been brought forwards one day as both the Japanese and English trailers have now made their way online and all kinds of new (yet leaked) information can now be seen on official sites.Every leak we got yesterday did in fact turn out to be true, but sadly, it seems there will be no Alolan Pikachu and Cubone, as regular Cubone and Pikachu are more than capable of evolving directly into Alolan Raichu and Marowak. As for Team Skull, it seems Team Skull’s leader has something in common with Professor Kukui, as they both failed to become Trial Captains, but there’s more than just that, so here’s all the official information regarding Team Skull:

“In the Alola region, a group of ruffians known as Team Skull causes a lot of trouble. They steal other people’s Pokémon, mess up the trial sites, and delight in all kinds of evil deeds.”

“Guzma is the boss of Team Skull, the one who holds these ruffians together. Guzma pours on the attacks, battling without mercy. He certainly does seem strong, but he claims that he “never could become captain.” He seems to have a bone to pick with Professor Kukui, as well.”

“Plumeria is considered the big sister of Team Skull. She’s a tough lady who keeps the members of Team Skull in line and working together, in the sort of way a strict older sister would. She seems to care for the Grunts who are below her in the pecking order, and she’s not one to let it go if anyone gives them a walloping.”

“Both male and female Team Skull Grunts wear matching black Skull Tanks. And these uniforms aren’t even provided for them—all Grunts have to buy their own!”

There is also some additional information on each of the revealed Pokémon, which you can see for yourself by clicking here. Sure we could include all of that information here as well, but since we cover all that and more in our Who’s That Pokémon? feature series, we prefer to post the information there so that we don’t duplicate the same information when we have to. So instead here’s both official trailers:

Although currently unconfirmed, the very next Sun & Moon news reveal is supposed to happen same time as usual, early September, but again that is unconfirmed, so we’ll just have to wait and see.