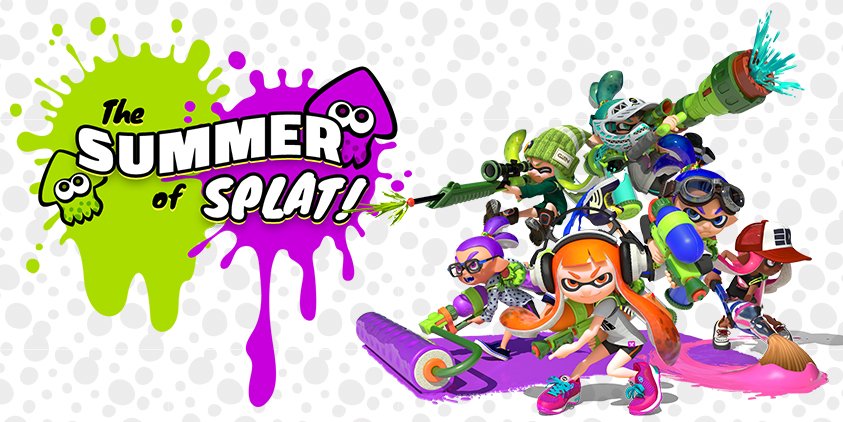 The Summer of Splat is Coming

Not only do we have Nintendo’s presence at Hyper Japan Festival 2016 in the UK, next week, but now it’s been revealed by Nintendo UK that this Summer will be the Summer of Splat, as a series of Splatoon based events are set to take place between July 16th until the 7th of August.

Those who do compete in the event, every weekend, the best teams will earn a place in The Splatoon Fan Fest, a day consisting of challenges that will take place at the Gfinity Arena in London on the 27th of August. Those who make it into the Fan Fest will also get the opportunity to grab themselves exclusive Splatoon prizes, which includes official merchandise, artwork created from the Art Director who worked on Splatoon and even the Splat Champ’s Winner’s Jacket and before anyone askes, the Splatoon Fan Fest will be streamed on Nintendo UK’s Twitch Channel.

Still just because the Great British Splat-Off is a big part of the Summer of Splat, it is not the only thing this grand event has to offer as there is also a cosplay and art competition. Here’s an official statement with all the details of what you can expect from the Summer of Splat:

“In addition to fans partaking in gameplay tournaments, kicking off from 11th July via the Splatoon Facebook page, Nintendo is also offering fans the chance to get colourful with two competitions, inviting fans to share their style by submitting an image of their Splatoon-inspired cosplay or by submitting Splatoon-themed art. Each week (for four weeks) Nintendo will select five of the best entries from each competition and showcase them via the Splatoon Facebook page. All entrants selected throughout the four weeks will be invited to attend The Splatoon Fan Fest on 27th August for the grand finale.

As well as providing an opportunity for the victorious to come together and demonstrate their squid skills, The Splatoon Fan Fest will feature a host of Splat-tastic entertainment and Splatoon matches, as well as the final judging of the cosplay and art competitions.

Fans will also be given the unique chance to pick up exclusive Splatoon giveaways and prizes, including rare merchandise, exclusive artwork created by Splatoon’s revered Art Director and a one-off personalised Splat Champ winner’s jacket.

The Splatoon Fan Fest will be live streamed on Nintendo UK’s Twitch Channel so everyone can keep track of the action as it happens.

Anyone yet to jump into the unique world of Splatoon can take advantage of an upcoming 25% discount on the software price in Nintendo eShop, down from £34.99 to £25.99 between 15:00 CEST on 7th July and 23:50 CEST on 21st July. And to help new players make a splash in their first Turf War matches, Nintendo has released a series of Splatoon – Top Tips! videos covering the basic skills players need to master, straight from the game’s co-director, Tsubasa Sakaguchi.”

Nintendo UK are certainly making sure gamers in the UK have a ball this summer, so if you are in the UK, why not get involved? It would be foolish to miss out on it all, even if you do detest Splatoon. We’d get involved if we had the chance, as would a huge range of Splatoon lovers in Japan and North America, so don’t just do it for yourselves, but do it for all of them and us as well. So until next time, Stay Fresh!