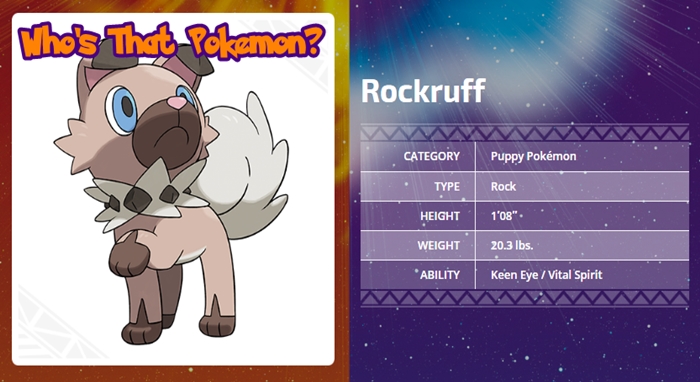 For every day that passes, is another day we move closer to the release of Sun and Moon and the closer we get, the more Pokémon we get to learn about. This is “Who’s That Pokémon?” A series of posts regarding the Pokémon we can expect to see in the upcoming games. From Rowlet to Magearna, we’ve covered them all, but now with the latest batch revealed, it’s time for some more additions of Who’s That Pokémon? and in this particular post, it’s all about Rockruff!

Description: “Rockruff has an excellent sense of smell, and once it has smelled an odour, it doesn’t forget it! There are tales of these Pokémon getting separated from their Trainers, then using the faintest traces of their scent to track them for days until they are reunited!

Rockruff is a sociable Pokémon, but as it grows, its disposition gets wilder. If it begins to howl when the sun goes down, that is proof that it’s close to evolving. It’s said that it leaves its Trainer’s side to evolve and returns again when fully evolved.

Rockruff stands bravely in battle, even when it’s taking damage. Although an opponent may be stronger than Rockruff, the Puppy Pokémon is so persistent, it keeps going until it outlasts its foe and gets the win!

Bite is a good move for Rockruff. It deals damage by biting an opponent with its sharp teeth. This may make the target flinch.”