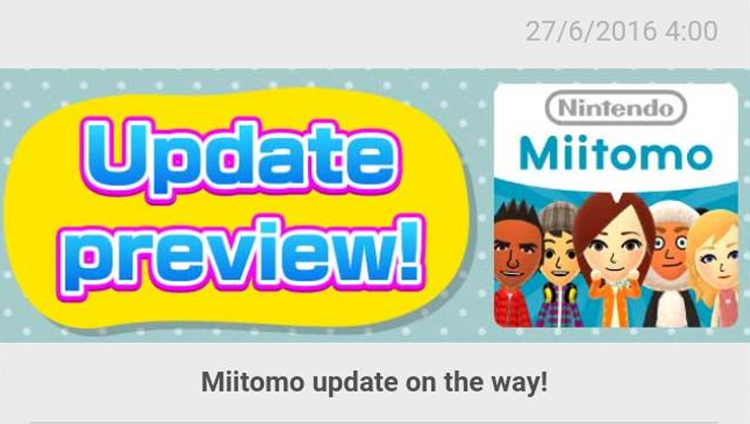 A New Miitomo Update is on the Way

As part of keeping Miitomo relevant, Nintendo aim to bring regular updates and content to the app whenever possible and with its almost immediate release in three more countries, a new update has been revealed to be on its way.

The new notification from Nintendo, provides a few details on what the new update has in store for us, which you can find below as both and an image of the complete notification:

*Talk about your news at any time when talking with your Mii.

*Tap links in Answers and Comments to open them in a browser.

*Increased service options for sharing and sending invitations (Including WhatsApp.)

*Switzerland, Mexico and South Africa have been added as region setting options.

It is expected the update will become available on the 30th of June, the same day the app will arrive in Mexico, Switzerland, and South Africa. Anyone who does download the app on that day to start their own Miitomo adventure, will also be able together the free Mario Hat gift for your Mii to wear.  But you will need to make sure you grab it quick because it is only sticking around until the 1st of July. There is also a purchasable Mario Suit from My Nintendo as a reward but that too is on its way out in July. Mario Hat and Suit aside, as of now there are some new items available in the Miitomo Shop, so if you have coins to spare then you can afford to purchase the following items:

Last but not least, there has still been no mention of a Europe or North America based Miifoto Event yet, but maybe we can expect to get one next month. Should one be announced, we’ll post all about it here at Miketendo64.com, but just Japan got a Miifoto event, anyone in Japan when the new update comes out, or has their region setting set to Japan, will be able to have Notable Miis (Star Accounts) and listen to their answers and follow them. Me personally I’d rather get an update that allows me to personalise my room to make it more me, but once again, Miitomo continues to favour Japan first and then everyone else and there concludes our Miitomo news for today.