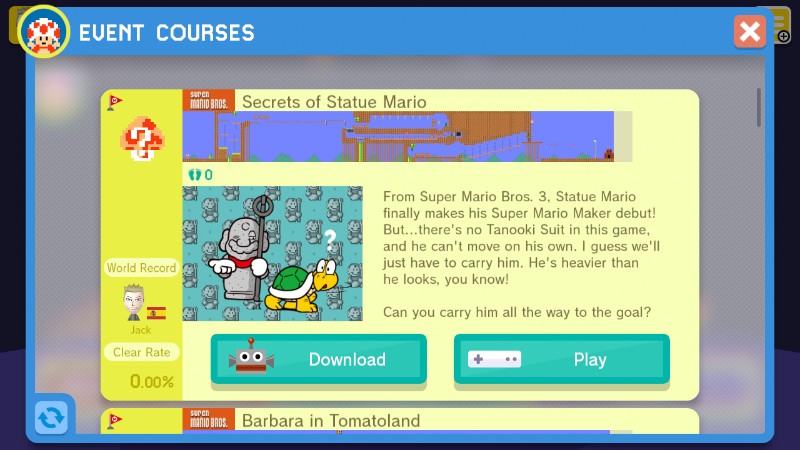 Before we even go into detail about the release of the latest event course release for Super Mario Maker, first let’s talk about the all new update that’s on its way on March 9th which was announced during the 03.03.16 Nintendo Direct.

First and foremost there are no new game styles, such as Super Mario Bro. 2 but there are a bunch of new tools, such as the Skewer from Super Mario World, which you can get by shaking the Thwomp until he changes.

Then if you shake the P-switch, it will turn into a Key, which you can use to unlock locked doors, which you can get by shaking the doors to become P-Switch doors and then keep on shaking until they become “Key doors.” Not only that but you can make enemies hold the key, thus making boss fights a lot more necessary. No more will you be able to just run along, hoping to evade a battle.

Another new element, which is also key related, is you can now shake coins to make them pink coins, which if implemented into a level, will see you needing to collect every pink coin, so that you can get a key to unlock the a key door.

Bigger updates coming to the game is an update to the Super Mario Maker bookmark website, which will now have more records added to it, and 100 Mario Challenge is back with a vengeance with an all new Super Expert Mode. In order to unlock this mode, you’ll need to have beaten Expert Mode, and although it will be much harder to beat, there is a small mercy in the fact that it is only 6 levels you’ll have to beat in order to unlock a new batch of mystery mushroom costumes, two of which we already know. #132 is Wolf Link & Midna from the Legend of Zelda: Twilight Princess and #135 is Tetra from the Legend of Zelda: The Wind Waker.

It will be no easy feat mastering this new mode, but it the reward certainly is worth the tears we are most likely going to shed, the reward of satisfaction of mastering such a hard feat and although that wraps it all up for the details on the new update, but we still have the all new Statue Mario to go over.

Out now is Secrets of Statue Mario, the latest in a long line of event courses. Successfully reaching the flagpole at the other side enables you to unlock the Statue Mario costume, one of the more unique looking costumes, as Mario isn’t wearing the Tanooki suit, but actually carrying around a statue of a Tanooki Mario. Apparently he’s got bored of completing courses without carrying something around with him, hence the new costume, which you can see for yourself in the trailer below and beneath that is the description for the latest course.

From Super Mario Bros. 3 Statue Mario finally makes his Super Mario Maker debut! But… there’s no Tanooki Suit in this game, and he can’t move on his own. I guess we’ll just have to carry him. He’s heavier than he looks, you know. Can you carry him all the way to the goal?

A new update has certainly been long overdue, but to find out it’s less than a week away, that’s even better news. How many of you are excited to try out Super Expert Mode? We’d love to know, just like we’d love to know what you think of the new elements the update will give us.