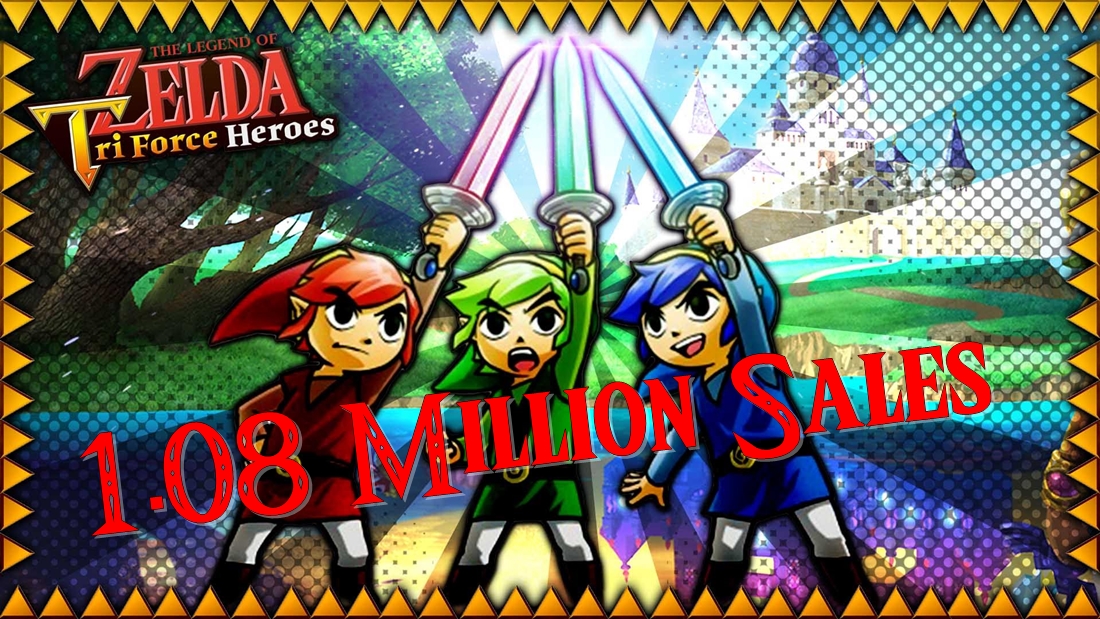 With Zelda Month now full in effect, it’s time to bring on some Zelda news and this time, it is in the form of Tri Force Heroes sales numbers, which since its October 2015, has sold 1.08 million units worldwide.

Now at first, yes the results aren’t all that staggering, especially when you think of the likes of Xenoblade Chronicles, which has over 2 million sales in Japan alone, but that doesn’t make Tri Force Heroes that much of a failure. It wasn’t the only Zelda game that was released last year, as the iconic Majora’s Mask 3D also had its debut and according to sales figures published on the 9th of January, 2016 that game has only made 2.18 million sales worldwide, over twice the amount of unit sales of Tri Force Heroes, (which also on that date, at the time only had 0.95 million units sold), but in an 11 month period. Tri Force Heroes isn’t necessarily out for the count just yet, as it does still have 7 more months before it hits its own eleven month period, so it does still possess plenty of time to acquire some well needed sales as the game is slowly climbing in popularity.

One thing that would greatly boost sales is if they were to bring in a new function to the game, such as an online competition, similar to that of Splatfest, or just a new Den of Trials and costumes, gamers who don’t have a Wii U and want to celebrate 30 years of Zelda, might just find themselves more tempted to buy it.

Another thing to bear in mind is that although Tri Force Heroes has only currently sold 1.08 million units, it has successfully outsold its multiplayer predecessor, Four Swords Adventures, which was only able to acquire 0.81 million units, which makes Link’s Hytopia/Drablands based adventure, the highest-selling standalone multiplayer Zelda game and also the game that did win a double at the IGN Awards, taking home IGN’s Best Game of the Year and Best Co-operative Multiplayer.

Love it or hate it, but Tri Force Heroes is actually a good game, sure it might have a mediocre story and concept, but the dungeons and puzzle mechanics involved, are some of the best there are and are packed with the special Zelda magic. For now Nintendo may make another multiplayer Zelda game, is uncertain, but when it comes to the Legend of Zelda, you just can’t rule anything out and personally I loved Tri Force Heroes and if none of the above are able to convince a few of you to give it a try, maybe our review and feature pieces on the game can.

Tri Force Heroes – The Speed run Secret is Out / Feature