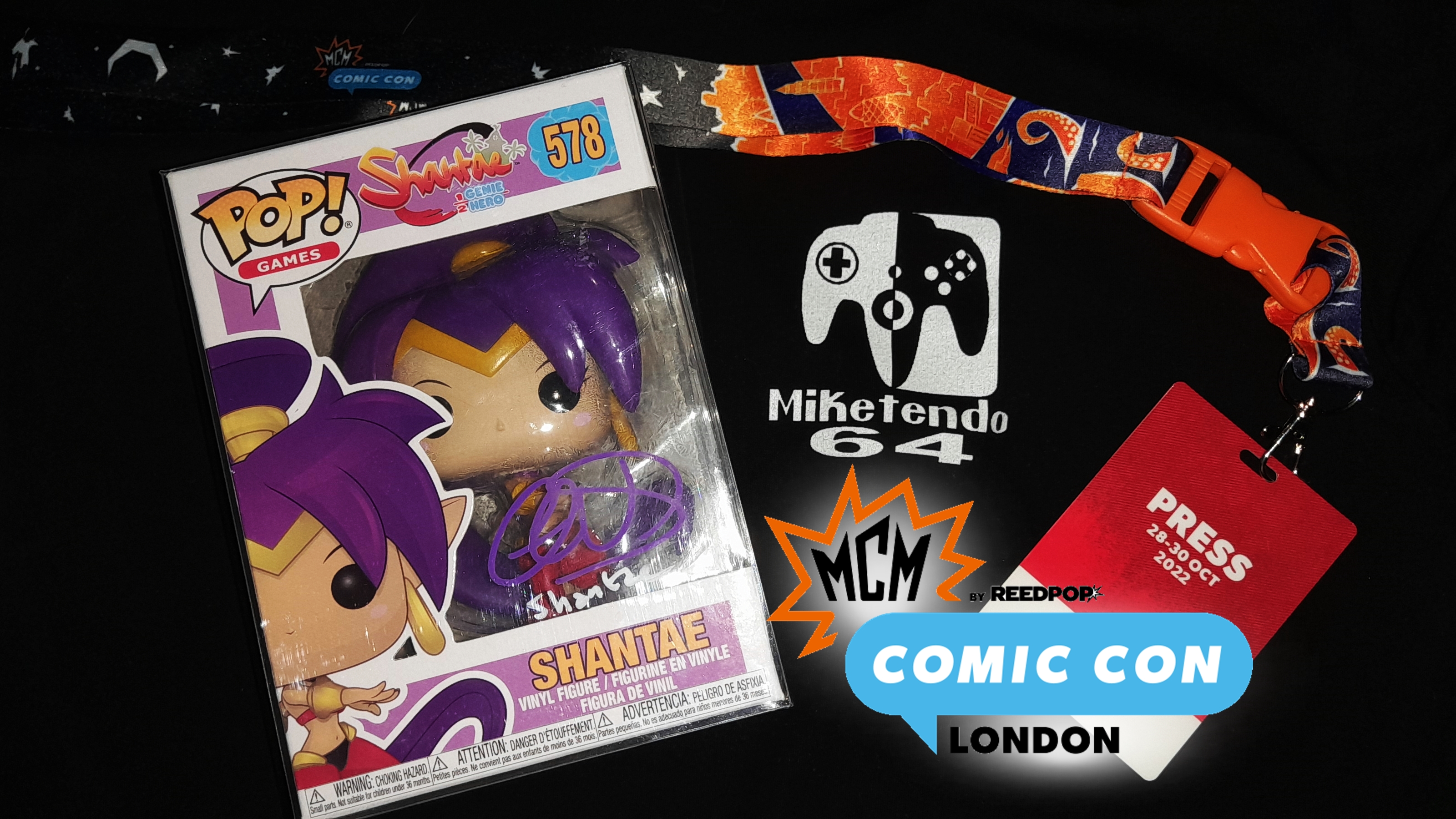 MCM Comic Con London is one of the biggest Comic Con events in the whole of the UK where tens of thousands of people flock to every year. The event is hosted twice a year at the ExCel building in London and gives fans of all types of media and pop culture, be it comics, film, TV, video games, anime and everything in between, the chance to come together and share an incredible experience.

While my brother Jack has been to MCM Comic Con London on behalf of Miketendo64 a couple of times, this was my first time and I was really rather looking forward to it. I went to the event on Sunday and I was accompanied by my mum Larissa (AKA Mumtendo64) and her partner Andy. We have all had quite a difficult week for personal reasons so when the opportunity presented itself to do something fun came up, we took the chance with both hands. Mum and Andy had never been to ComicCon before either so it was a first for all of us.

When we arrived at the ExCel building, we had a pretty long walk ahead of us just to reach the entrance to the event itself. Whereas EGX is hosted on one side of the building, MCM ComicCon takes up the entire ground floor. Due to this, we had to literally walk the whole perimeter of the building from where we had parked just to reach the area where we needed to pick up our tickets. Fortunately, as we had gone in the afternoon, there were not any long queues and before we knew it, we were inside and the place was heaving.

As it was already afternoon when we arrived to MCM Comic Con London 2022, we were rather limited to what we could do and see in a short space of time. We had a couple things that we would like to see like the Doctor Who panel with Peter Davidson, Paul McGann, and Colin Baker, and meet the wonderful Voice Actress Cristina Vee Valenzuela (Shantae, Genshin Impact, Hyrule Warriors: Age of Calamity, Miraculous Ladybug, etc.).

We were fortunate enough to do both although we did have to split up for a little while in order to do so. My mum really wanted to see the Doctor Who panel and it was her principal reason for coming to MCM Comic Con London 2022. For me though, the opportunity to thank Cristina for voicing my favourite Half-Genie Hero from WayForward’s Shantae series. I saw Cristina Vee in the Photo Op and Autograph area as she was a guest at the event and was doing signings for her fans. It was such a pleasure for me to be able to meet her in real life as I do enjoy listening to her voice work in the Shantae games. She was such a lovely and graceful person that she even signed my Shantae POP figure, which I shall cherish forever!

One of the other big highlights of MCM Comic Con London 2022 for mum, Andy and I was, of course, the ocean of merchandise stalls. They were everywhere and if we had a bit more time, we would have got round to them all. There were stalls for all kinds of merchandise. There were T-shirts, cosplay accessories, trading cards, board games and retro video games, plushies, comics, books, DVD box sets. If there was something you were looking for in particular, chances were, you could find it there or something very similar.

Mum and Andy had a blast checking out the stands and picked up a good number of T.shirts for themselves. They even found a stand which had the Cable Guys figures that hold/display your smartphone of games console controller. As they loved the look of them, Andy and my mum purchased a couple (Amy from Sonic the Hedgehog and Grogu from The Mandalorian).

MCM Comic Con London 2022 had such a great atmosphere to it. Everybody there was happy to be there and there were so many fantastic cosplays as well. There were Ghostbusters, Super Mario, Darth Vader, Cloud Strife and Sephiroth, Elden Ring, Geralt de Rivia, Spider Man, Doom Slayer, Captain America, Harley Quinn, and many more that I honestly didn’t recognize. The attention to detail on their outfits was phenomenal and you could see that they put a lot of work and effort into designing and making them as many were not just shop bought but actually crafted by hand.

There were a lot of people who were more than happy to dress up for the occasion for MCM Comic Con London. I would have loved to have had more time to take more pictures of the many cosplayers in attendance but I was very impressed by who and what I did see during my time at the event.

There was also a retro game library at MCM Comic Con London 2022 that had a selection of retro consoles that people could go up to the reception desk to take out a game and play on one of the retro consoles of their choice. You had to bring the game back after you had finished but I did think that was a pretty cool idea and think I may have seen this before at EGX one year as well.

To wrap up my short time at MCM Comic Con London 2022, I seriously had a fantastic time. I do wish I had more time to see even more of it and event some of the other guest panels that included the likes of Tom Welling, Erica Durance, and Laura Vandervoort from Smallville which I used to watch enthusiastically when I was younger. The elusive Troy Baker (The Last of Us, Bioshock Infinite, Uncharted 4: A Thief’s End) was also there who I would have also have love to have seen as my brother has also missed him every other MCM ComicCon that he has been to. However, it was still not to be but maybe one day we will meet him. Michael Sheen from Good Omens was also at the event by alas, I missed him as well.

On the plus side, I did bump into fellow convention buddy Rich Stokesy who I met at WASD back in April of this year and at EGX in last month (September). We exchanged greetings and caught up briefly before continuing on with our days. I must admit that it was quite incredible that we did bump into each other as neither of us knew the other was attending MCM Comic Con London. On top of that, there really were a lot of people at the event so to actively try and find a particular person in such a crowded place would have been a huge task in itself, let alone unknowingly crossing paths with them. Though to be fair on Rich, he did see me first as I was wearing a black Miketendo64 T-Shirt with the large logo on the back that he instantly recognized.

Hopefully, the next time I attend MCM Comic Con London, I will set aside more time for myself so I can get the maximum possible enjoyment out of it. That said, I did have the most excellent time and am seriously looking forward to going again next year (Hope to see you there!).