[Feature] Manga Weekend Antequera: A Half-Baked Attempt That Could Have Been The Start Of Something Great 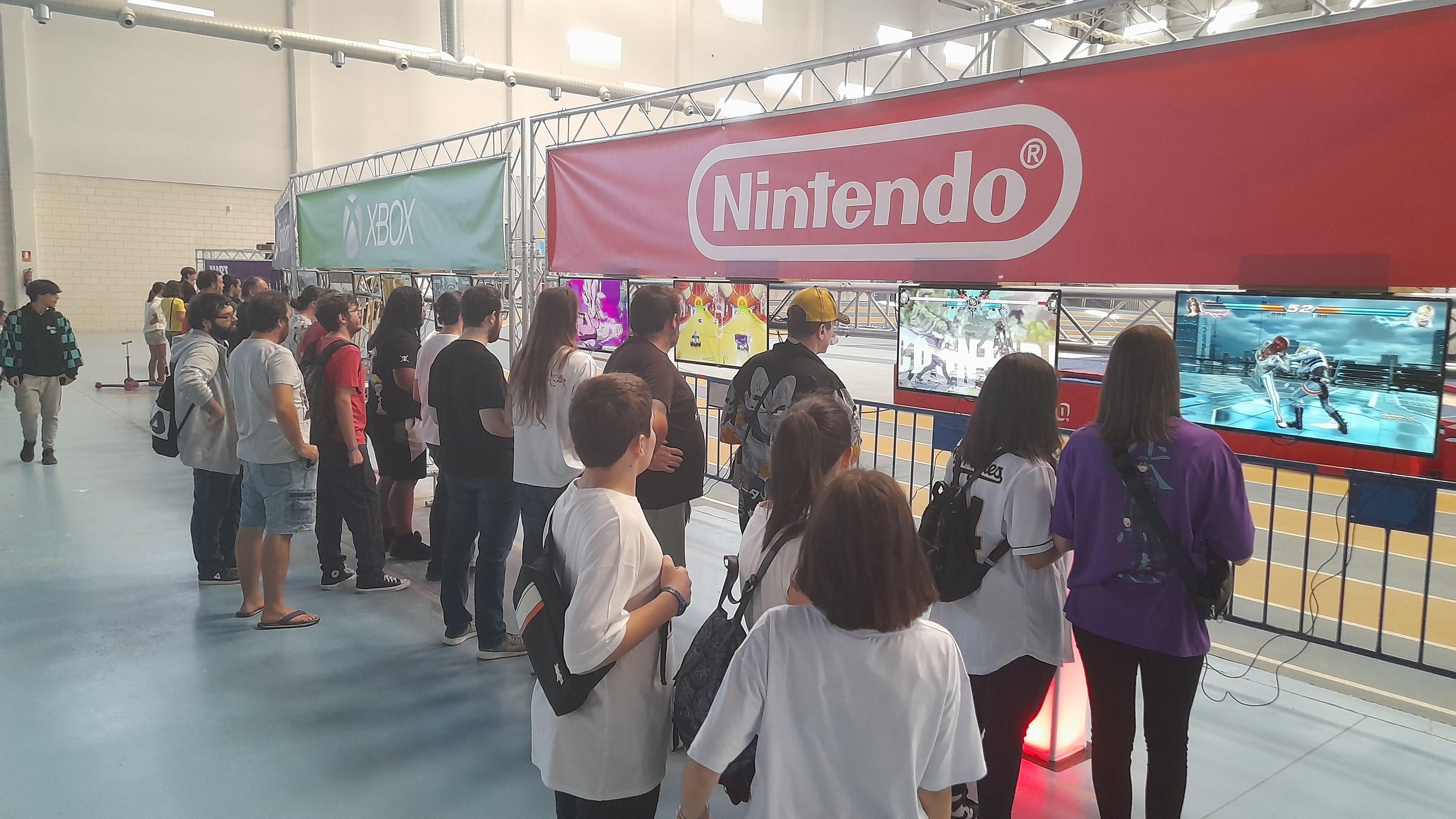 This weekend was the first edition of Manga Weekend Antequera, a new festival to “celebrate Manga, Anime, Video games, and all things Japanese” in the town of Antequera, Spain. Well, that was the general idea but its execution seemed to fall far from the mark.

We at Miketendo64 are always open to trying new things and giving them a go at least once. We know that organizing an event or getting a new one off the ground, be it a video game, comic, anime, or even a book fair, is not an easy task and making it a success so you can do it again the following year requires a lot of effort and positive reception so people can be excited for it when the time comes round again.

What with Manga Weekend Antequera being a first-time event, I wasn’t expecting it to be like EGX, Gamescom or PAX West, so I knew to keep my expectations quite low. What I saw however, managed to fall even lower than that. The whole affair was extremely low key. There was no promotion of the event anywhere in the town, not a single poster or a notification on the Town Hall Message Board. The only inkling that the event was happening at all was a couple of posts shared on Social Media by the town hall and local press outlets. Even at the venue where the event was held, there wasn’t a single banner or even a handwritten sign to say “Manga Weekend Antequera”. The only sign that there was an event held here at all was the dozens of people who were waiting outside.

When the time came to enter the venue, which was quite a large sports hall, I was beyond disbelief that the event itself was merely a single aisle that ran down one side of the sports hall with a dozen video game consoles, a table for workshops like badge making and paper crafts, a single stand with merchandise and a small stage. It was truly a small affair that could have easily have fitted in a much smaller venue like the local youth center or even in the courtyard of the Town Hall itself, not in a sports center that has the majority of its floor space dedicated to athletics with a running/cycling track with elevated bends and sand pits in the middle for long jumps and triple jumps.

“Okay, so it is small and will tale less than five minutes to see everything but let’s see what is exactly here. Maybe I’ll be surprised,” is what I thought to myself but as I looked around I could see that the actual organisation behind the event was an utter sham and that those who were exhibiting were doing the best they could with a poorly executed situation. Not everything was terrible at Manga Weekend Antequera The badge making g workshop was pretty fun amd gave participants the opportunity to draw something and get it turned into a badge. Naturally, I gave it a try and was one of the two things that I actually did at the event.

The other thing I did was take part in the Cosplay contest. Now, I’m no professional Cosplayer, I’m not even an amateur one but I thought I would go for fun as that is what the event was meant to be all about. My outfit was basically a very casual Super Mario with a red shirt and blue Jeans accompanied with the Super Mario cap and a face mask with a moustache on it. As it was the first time for me doing something like this, I was just going to do a couple of Mario impressions with some voices but just before I went up to the stage, there was a problem with the microphone so as I went up and did my (not so) best impression of Super Mario, no one in the audience could hear me. To say my performance went down like a lead balloon would be putting it mildly. I didn’t care though, I did something Ihad never done before and for me, that’s a win in my book.

As for the rest of the Cosplay participants, I had some fierce competition. Some of their outfits were really good and included the likes of Rapuzel, Deathstroke, Five Nights At Freddies, Demon Slayer, and Arcane. Although some of them had put such a lot more thought into their outfits, there were a number of us that had experienced issue’s on the stage. One of them had their spear snap in two, another had a picture frame that had a spring mechanism break, and one person had their wig fall off mid-performance. Mishaps aside, I like to think that we all gave it our all and even though there could only be one winner, we did enjoyed ourselves and we all got to pose on the stage one last time together.

With the good parts out of the way, it’s now time for some constructive criticism. First and foremost with any event like this, some much needed publicity should have been top of the agenda. Even at the event itself, like I said earlier, there wasn’t event a banner, poster or even a hand written not to say that we were at an event. Even at a village fête, you would expect to see a sign saying Village Fête. Well, there was nothing here at all and the only thing that could give any inkling was that the Escape Room area was cordoned off with a tarpaulin that said “Weekend Play” on it, which was probably borrowed from some other event.

There was a small area sectioned for VR, which I didn’t try myself but at any event that I have been to before with VR, they had a monitor to display what was being shown inside the VR headset. However, here there wasn’t even that. It was just one person with a headset on and another guiding them over a small plank of wood that acted like a tightrope. There was a short queue of people waiting to try out VR but if they had a monitor to display what is seen in-game, the queue would have been much longer.

What was possibly the biggest let down was the free play area where a dozen games consoles were set up. From a distance, it actually looked pretty cool. There were banners for Nintendo, Xbox, and PlayStation with four monitors dedicated to each company’s console. We’ll that is what they would have you believe but they were actually all PlayStation games with PlayStation controllers. If it was only PlayStation games at the event, that is fair enough but don’t advertise the other consoles if you don’t actually have them there. It was like that meme with the different retro consoles like a SEGA Megadrive, an Amstrad and a Commodore 64, and an older woman saying that they are all Nintendo consoles.

It was evident that the Town Hall who organised this event had no clue what they were doing and just threw a bunch of things together. It was like they called in a few favours to get the banners and the consoles set up and slapped the name “Manga Weekend Antequera” to give the event a name and that was it. I mean, if one was to hear the word Manga, you would expect there to be some at the event, right? At the sole merchandise stand that was at the event, there was just a single Manga, that was it and it was for a series called Cased Closed (also known as Detective Conan) that I didn’t even know was there until my friend Paco pointed it out to me.

For an event that was meant to be about Manga, you would expect there to be more Manga or anime. Instead, it was like going to a book fair without any books or a Car Show without any cars. Everything about this event was half-baked and not even the bare minimum was being provided. In fact, the only folks that put in any  real effort were those that attended and who actually cosplayed. I get that maybe the organisers were maybe being cautious with this event as they didn’t know if it would take off or not but the lack of effort meant that they had set themselves up for failure before even giving it a real chance for success.

This truly is a great shame as it would have been great to see Manga Weekend Antequera bloom and flourish over the years into something very cool and exciting. I may be a little biased but I did live in Antequera for a good few years and there had never been an event like this before. I, and I am sure many others from Antequera, would have love to have seen this event become something so much more.

Now, I am not writing Manga Weekend Antequera off completely. It has every chance of improving on itself and should the Town Hall wish to make the event a more common and well received occassion, they will have do really put in the work next time. Maybe a few stalls with mangas and anime merchandise of sale. Perhaps a Cosplay workshop where participants could learn more about the work that goes into making your own cosplay outfit or a even makeup booth, I’d would also be willing to offer my services next time around to help with the organisation of the event and lend my own Nintendo Switch consoles with the latest collection of Switch games for folks to play and enjoy.

Thank you all for reading this article and should you happen to be one of the organisers of Manga Weekend Antequera, I do hope that you don’t take my criticisms negatively but take them into account so that next year you can make Manga Weekend Antequera become something the whole town will be talking about, positively.