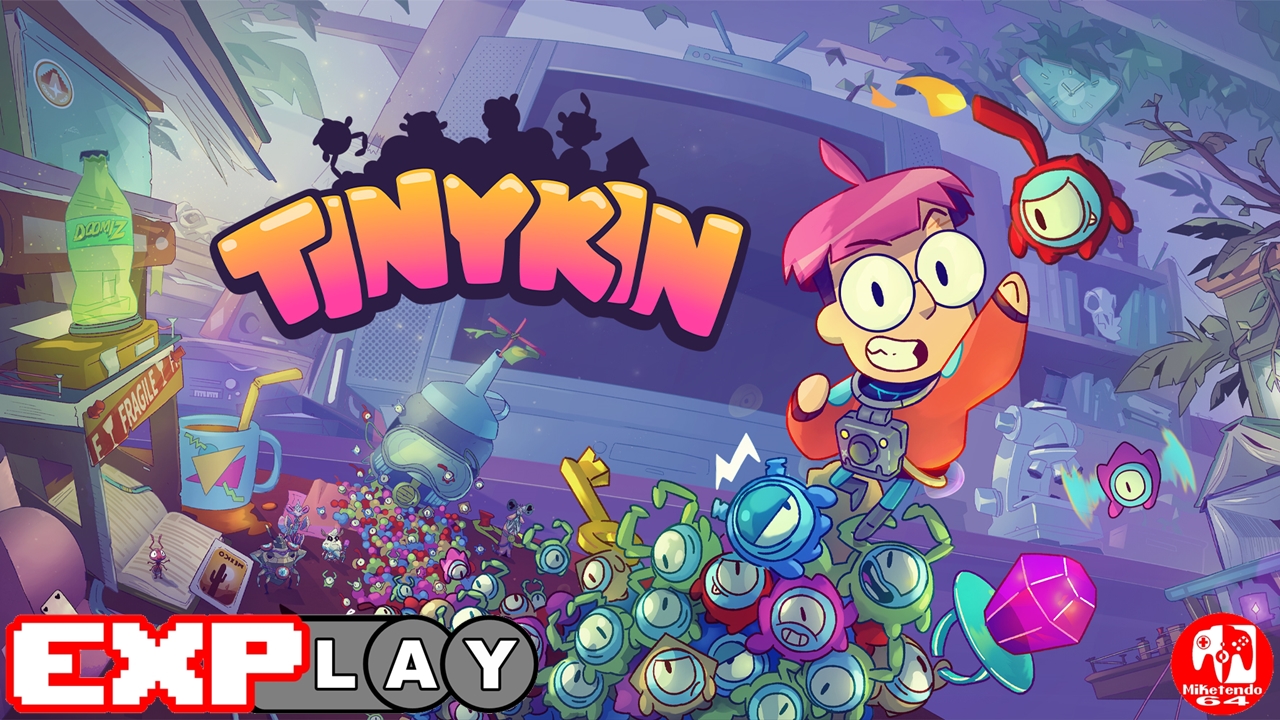 Welcome to EXPlay, (Explain & Play) the review series where we care not for scores but tell it how it is when it comes to every game we get our hands on, whilst also taking the time to include some lengthy gameplay, to give you the reader, the chance to shape your own impressions and views whilst watching and reading. In this installment, we’re covering Tinykin by developer Splashteam.

Tinykin’s sales pitch is simple and it does it really really well a Pikmin-like game that expands on the gameplay of Nintendo’s premier franchise while paving the way for its own story and world-building lore. You play Milodane from the planet Aegis who teleports to Earth stuck in 1991. Milo is shrunken down and stuck inside a house where he is soon asked to help construct a device to help him get back home with the help of Ridmi, the house moth and guide.

Ridmi tells you about the local alien-like helpers called Tinykin which range in abilities and colors. There are red bomb Tinykin which can be used to blow apart structures and objects in your path. Yellow ones form bridges that allow you to traverse hard-to-reach areas as well as bring objects you need back to your base of operation. The green ones can form a ladder to reach high spots. Blue ones form electric chains from outlets to wires and other electronics aiding in solving puzzles. And the purple ones are the main grunts that can move objects out of your way and safely escort items of necessity throughout the rooms.

Tinykin takes its cues from Pikmin, though it forgoes the game’s combat aspect of charging or throwing Pikmin into the path of enemies in hopes to defeat them in exchange for more Pikmin to fight with. Tinykin makes each room in the house a vertical playroom for uncovering quests from the resident insects you come across, ants, beetles, flies, grasshoppers, silverfish, and more. Within each area, there are tasks to complete for the residents and secrets to uncover.

In my early gameplay time with Tinykin I learned the basics of traversing the landscape using zip lines created by smaller moths and a bar of soap to slide along them like grinding a rail in a skateboarding sim. Milodane can also float for a short time using a bubble, which later expands giving you the ability to float across larger gaps. The world is dotted with real life items like books, lamps, toy cars, and more. Some items will allow you to leap higher as you bounce off of tambourines, drums, and hamburgers.

Just like Pikmin, some items will block your path requiring a set amount of Tinykin to be used to manuever the item out of your pathway. You can fling Tinykin towards objects in your path or across large chasms to unlock orbs of nectar, bomb blocks in your path, or gather items you need to build your exit pod.

Visually, Tinykin’s Milodane, Tinykin, and the insects you meet are 2D and colorful with a black outline, making them look a bit like an animated comic or cartoon on the detailed 3D world. Objects you find in the rooms are wonderfully detailed and oftentimes I found myself taking in the visual aesthetics of the game in awe of how the designers turned everyday objects into usable ramps, walls, and unique methods of level design. Where Pikmin takes more of a natural, garden-like atmosphere, Tinykin is almost entirely made up of manmade objects you would find in your own bedroom, bathroom, office, or kitchen.

If it isn’t evident yet in this EXPlay, Tinykin is truly a fun a unique experience and should not be missed. This is one of the few EXPlay games I have covered that when my 1-2 hour video coverage was done I kept playing to the end in a few sittings. In fact, Tinykin was so good it pulled me away from Splatoon 3 gaming and getting further than my daughter in the multiplayer. If you are looking for your Pikmin fix while we wait for Pikmin 4 next year, Tinykin is sure to fill that void even if the game is a bit short at eight or so hours for story mode and a bit longer for all the collectibles. I hope you enjoy the game!